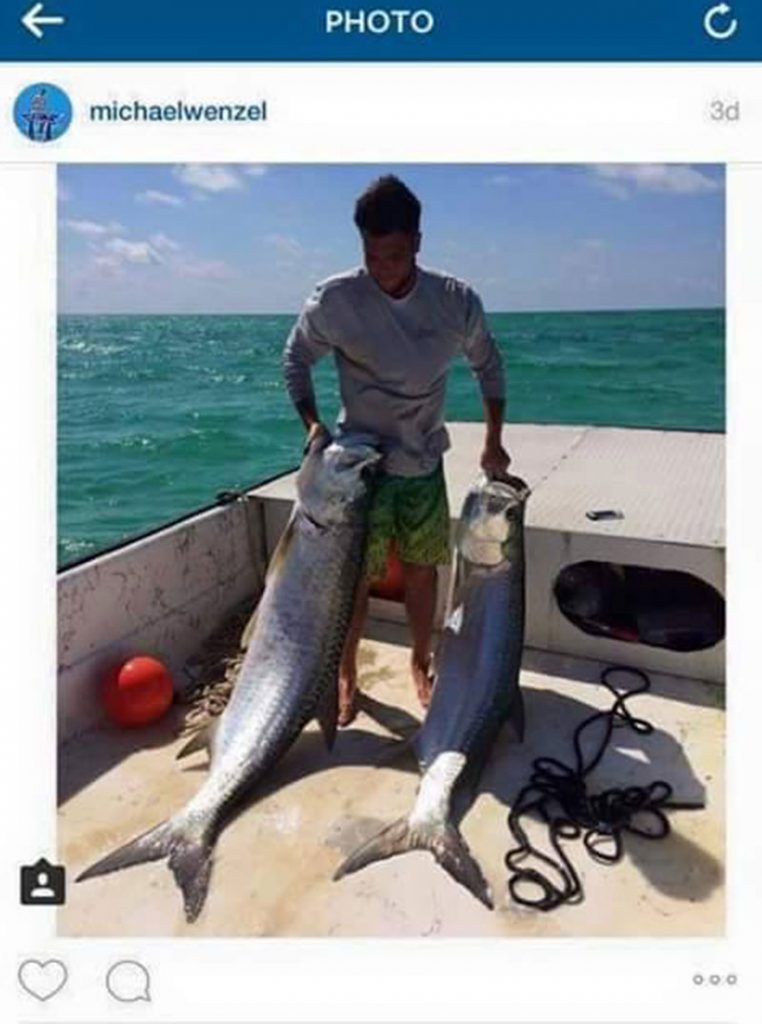 A photo of Michael Wenzel on the Save the Tarpon Facebook page depicts the apparent mishandling of the fish, which can be hooked, but tarpon exceeding 40 inches must remain in the water if there is no tag. 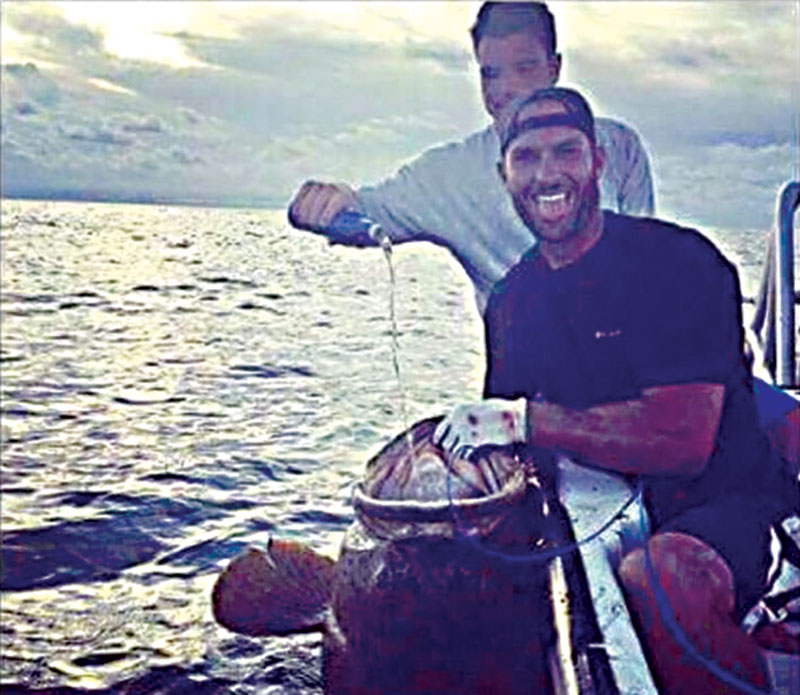 Another Facebook post allegedly shows Michael Wenzel and another man pouring beer into the mouth of a goliath grouper.

Authorities investigating the shark-dragging video — as well as thousands on social media demanding those responsible be held accountable — hope for a decision soon.

“The more we dig, it seems like the more crimes — at least fishing violations — we uncover,” said Assistant State Attorney Andrew Van Sickle, the prosecutor assigned to animal abuse cases in Manatee County.

He compared the investigation to “pulling a thread” that keeps unraveling.

Various groups have offered to support charges against the men in court, he added. Although the state and law enforcement aren’t releasing names, Van Sickle says they know the men responsible.

Still the investigation is building.

“We have received a large number of tips from the public and we’re looking into every one of them,” said Klepper, spokesman for the Florida Fish and Wildlife Conservation Commission.

Outrage has catapulted online and in the media, including CNN, The New York Times, Washington Post, Chicago Tribune, and overseas to include the Daily Mail and the BBC.

More than 196,600 people have signed a Change.org petition calling for the arrest of the men for the shark-dragging incident and other alleged acts of animal cruelty.

The petition seeks jail time, community service and the revocation of fishing licenses.

Mark “the Shark” Quartiano of Miami initially brought the video of the group of men in a speedboat dragging a shark to the attention of authorities.

Quartiano told the media he received that video and a photo of a filleted shark from Michael Wenzel, who boasted to him about the shark-killing.

The video shows three men aboard a speeding boat, allegedly Michael Wenzel captaining the boat, Burns Easterling commenting, “Look, it’s almost already dead,” and Spencer Heintz on his phone. A fourth man, Bo Benac, is alleged to be behind the camera.

Easterling grew up on the island, where his father was the original developer of the failed Tidemark Lodge, now being developed as Waterline Resort. Manatee County planning section manager Robert Wenzel and County Commissioner Betsy Benac are parents of Wenzel and Benac. Heintz is the son of attorney Steven E. Heintz, a local personal injury attorney.

Numerous other videos of abuse allegedly at the hands of Wenzel and friends have circulated online since the Quartiano video release.

They show some of the men shooting fish with handguns and flare guns, pouring beer into the gills of a hammerhead shark and the mouth of a goliath grouper, harassing a manatee by putting a water hose in its mouth, pulling the wings of a white pelican, and other abuse.

Capt. David White of Anna Maria Charters said Wenzel has been known for killing tarpon in the area “for a couple of years.”

Wenzel was previously investigated by the FWC, although no charges were brought, which may be what prompted him to label himself as “FWC’s Most Wanted” on Instagram and Facebook.

White said the men deserve to be arrested and never allowed back on the water.

“Even if nothing happens, this will follow them the rest of their lives,” he said.

Gov. Rick Scott spoke out on the incident in a July 28 letter to the FWC. He called it irresponsible and reckless abuse and asked for a review of fishing regulations and state law “to ensure such inhumane acts are strictly prohibited.”

Apparently, the county will not take comments.

Manatee County Attorney Mickey Palmer read a statement Aug. 3 to the Board of County Commissioners, recommending it “refrain from entertaining comments” about the shark video and such matters, saying they “apparently occurred on and in the waters of the state of Florida” and “not the business of county government.”

A spokesperson for the men, Jon Weiffenbach Jr. of Weiffenbach & Reinhart, a law firm in Bradenton, said to be a friend of the families, did not respond to July 28 and Aug. 5 emails asking for comment on the investigation or whether any of the men have issued an apology.