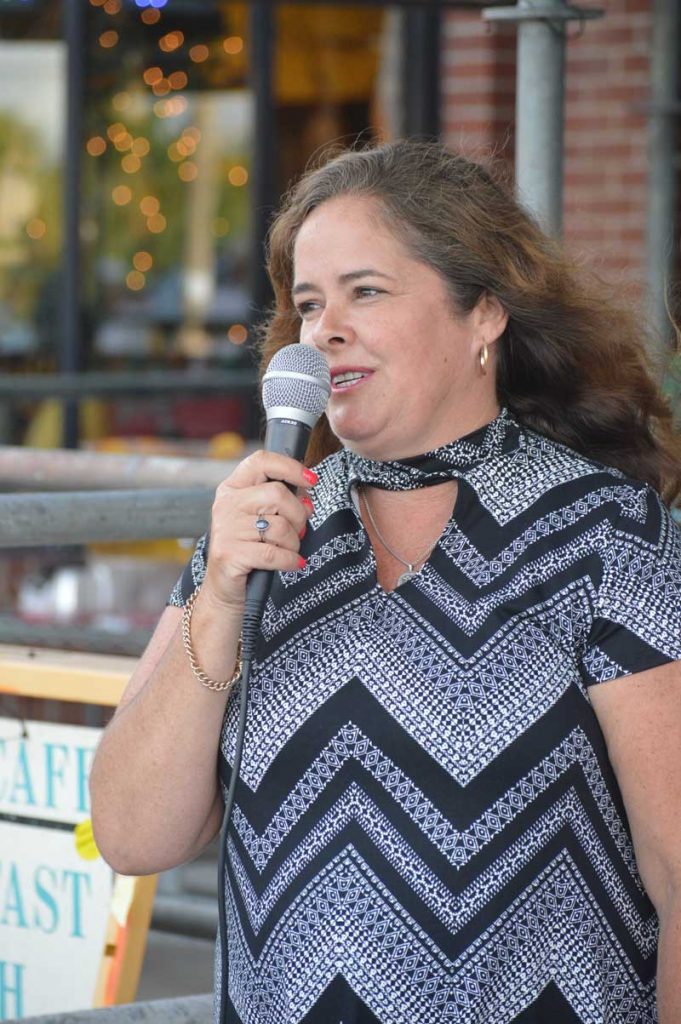 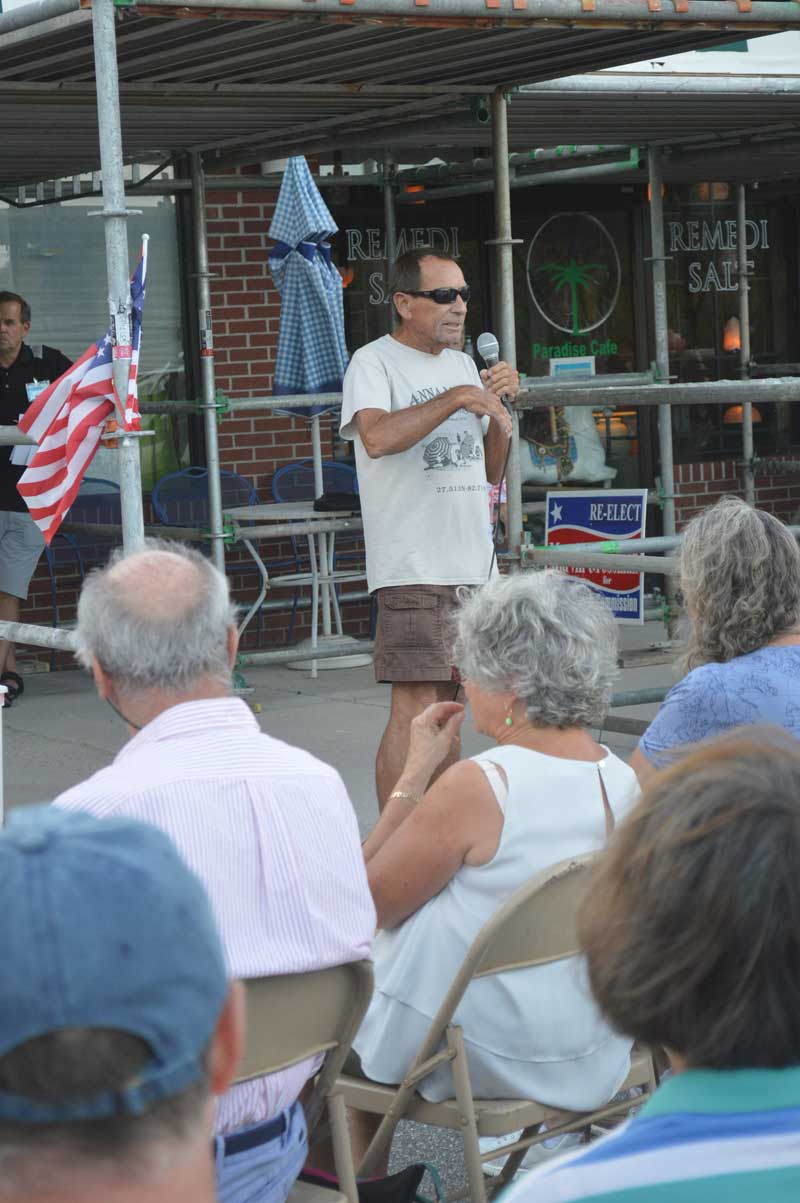 Anna Maria Commissioner Dale Woodland, running for re-election, appeals to the audience at The Islander’s Oct. 13 Popcorn and Politics meet-and-greet event at the newspaper office in Holmes Beach. 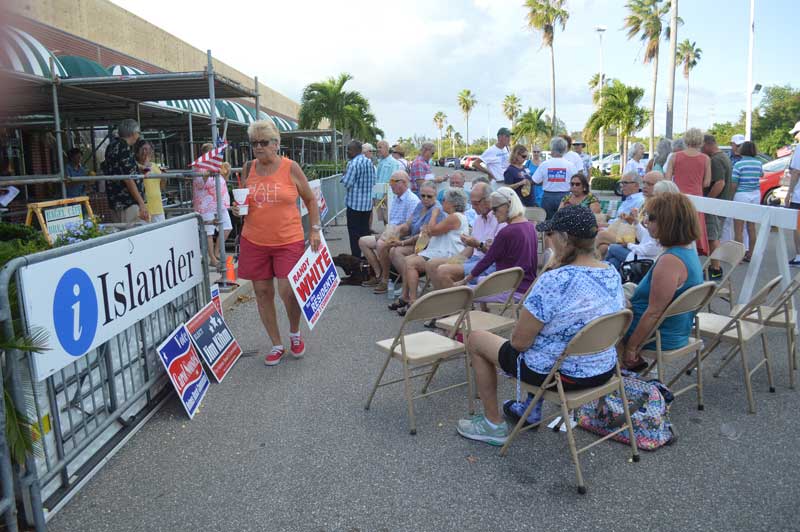 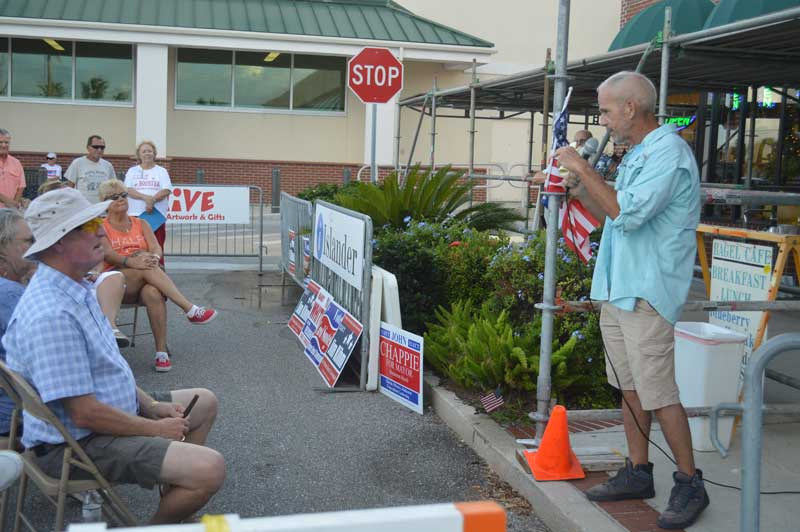 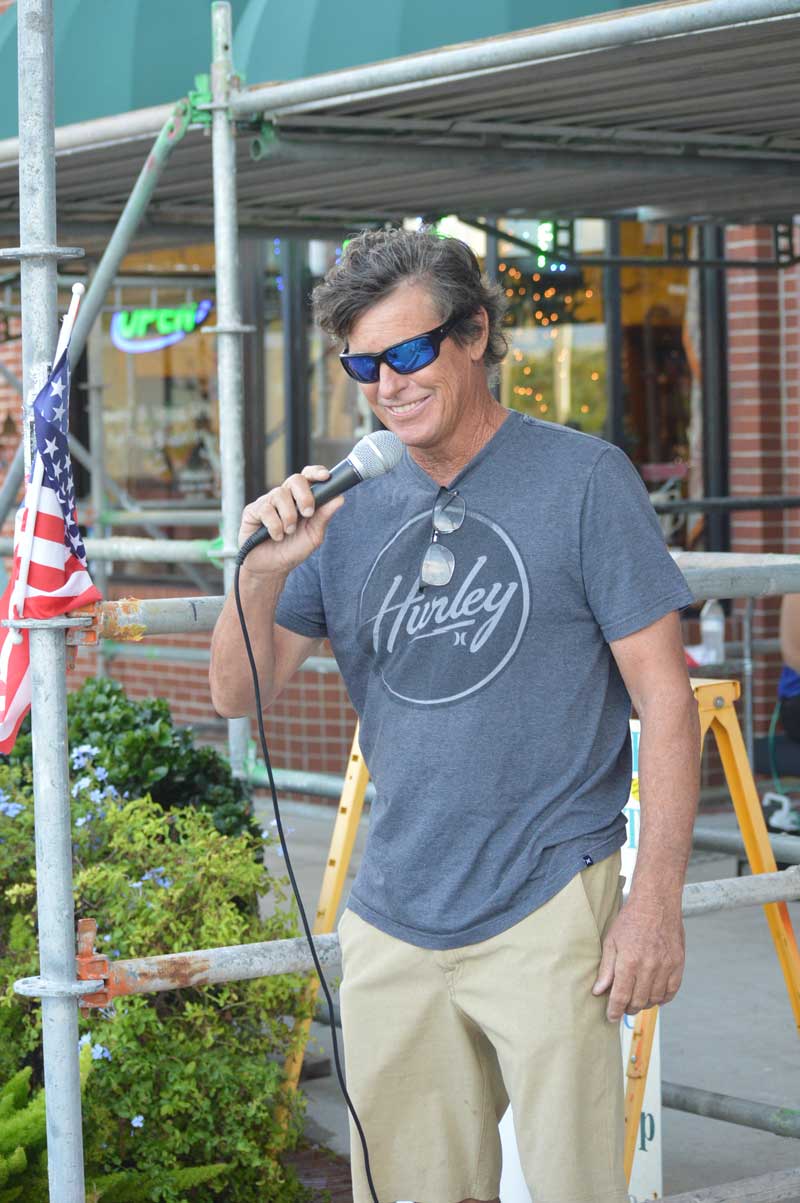 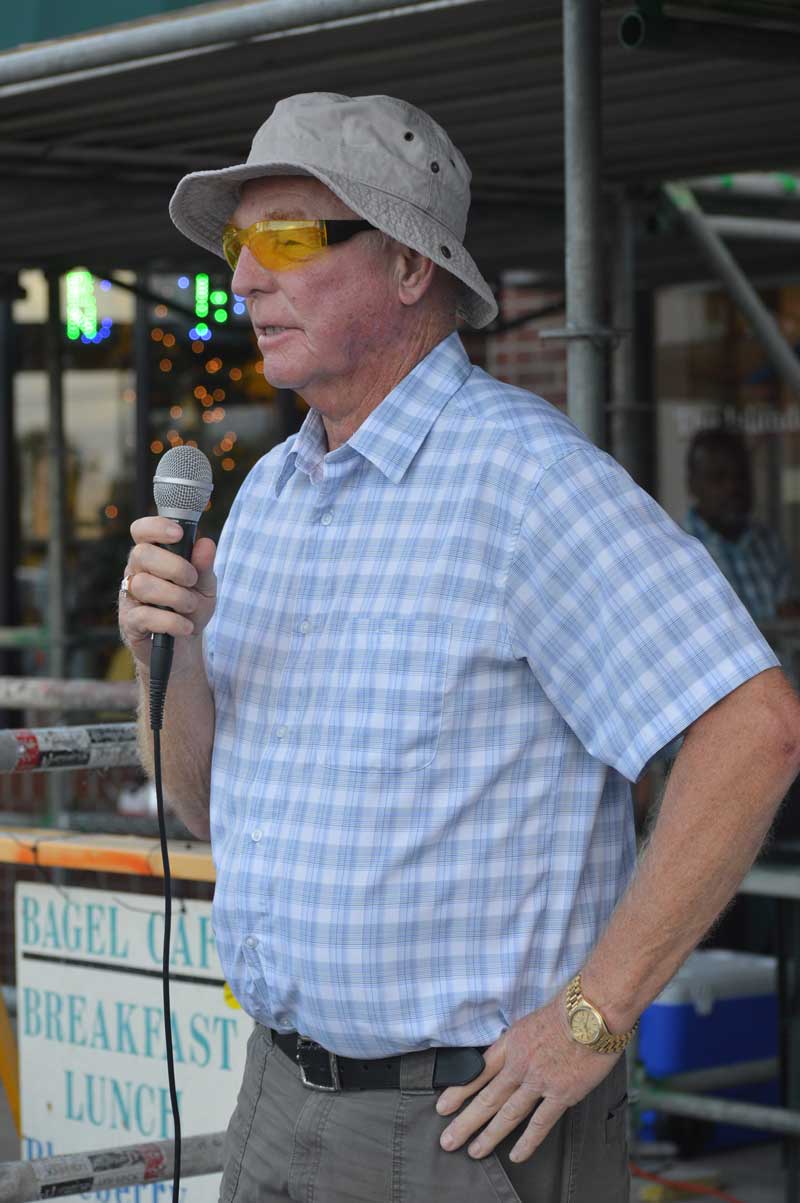 Bradenton Beach Mayor Bill Shearon speaks of his accomplishments and asks voters to return him to office for another term. 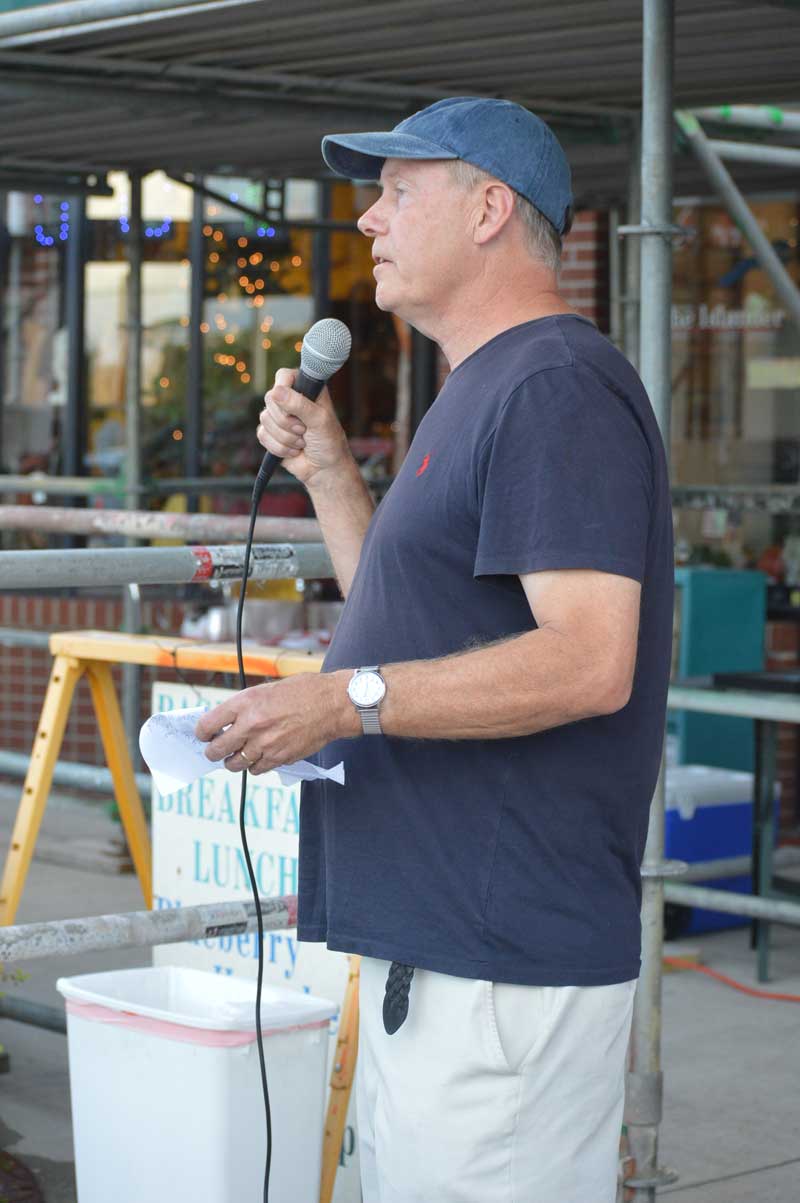 Bradenton Beach Ward 4 Commission candidate Randy White tells the crowd at Popcorn and Politics he may be the new kid, but he’s “been around the block.” 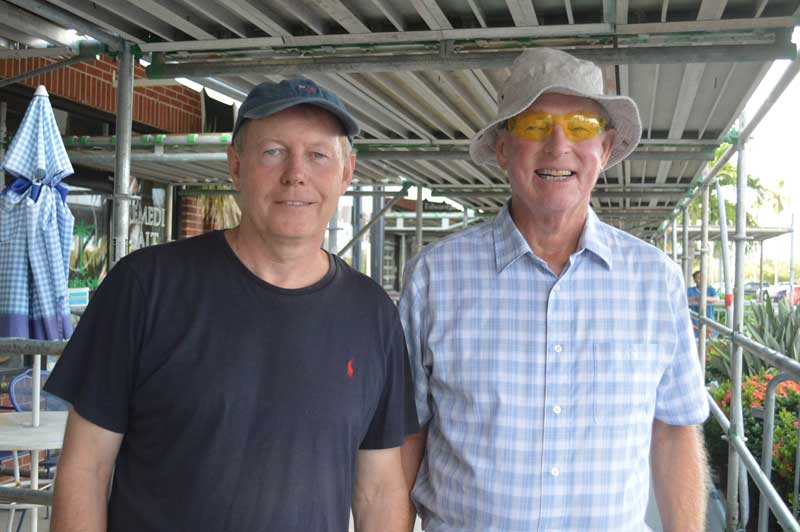 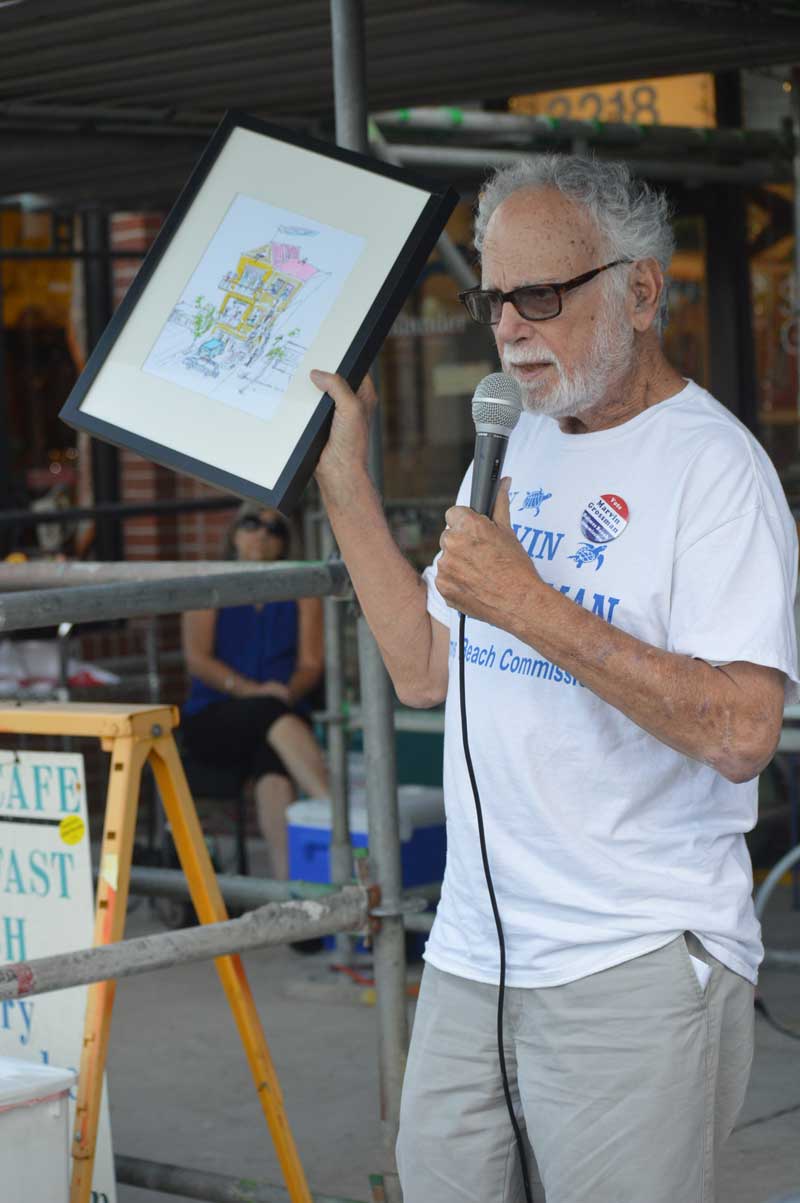 Holmes Beach Commissioner Marvin Grossman demonstrates his concern for large vacation homes while asking to serve another term in office. 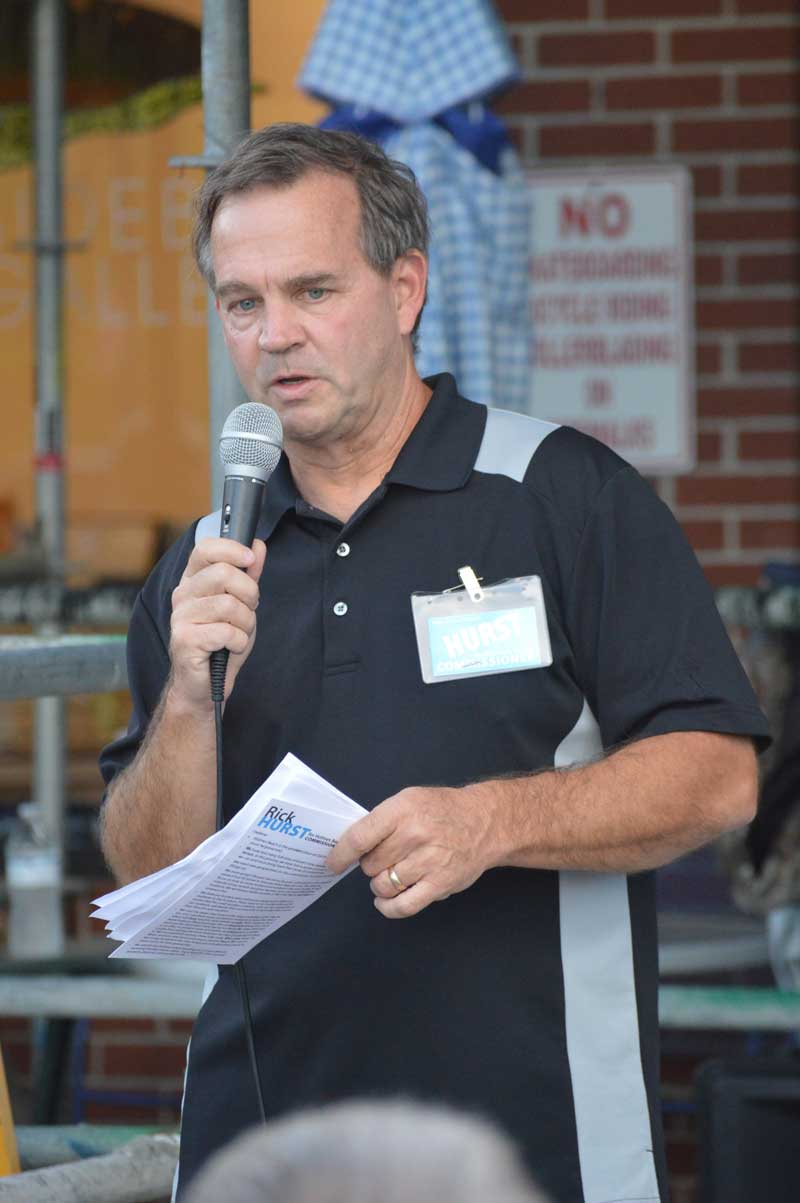 Holmes Beach commission candidate Rick Hurst is focusing on redeveloping the community in his bid for office. 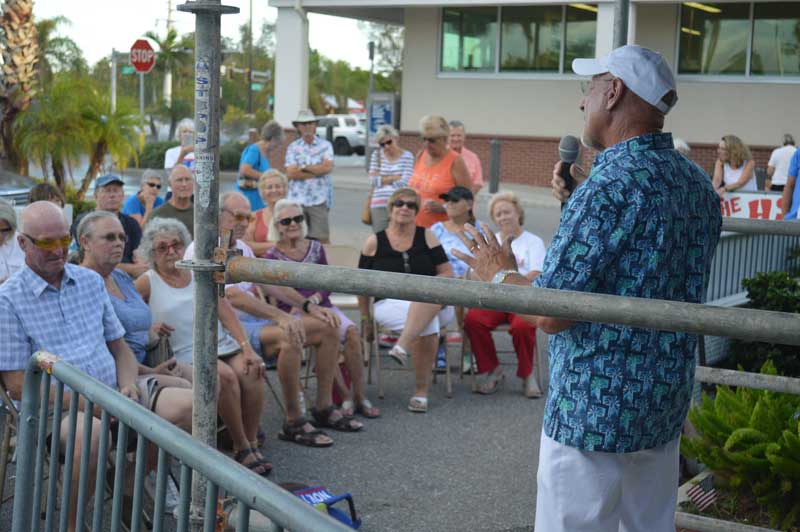 Commission candidate Jim Kihm hopes to put his experience to work on the dais in Holmes Beach. 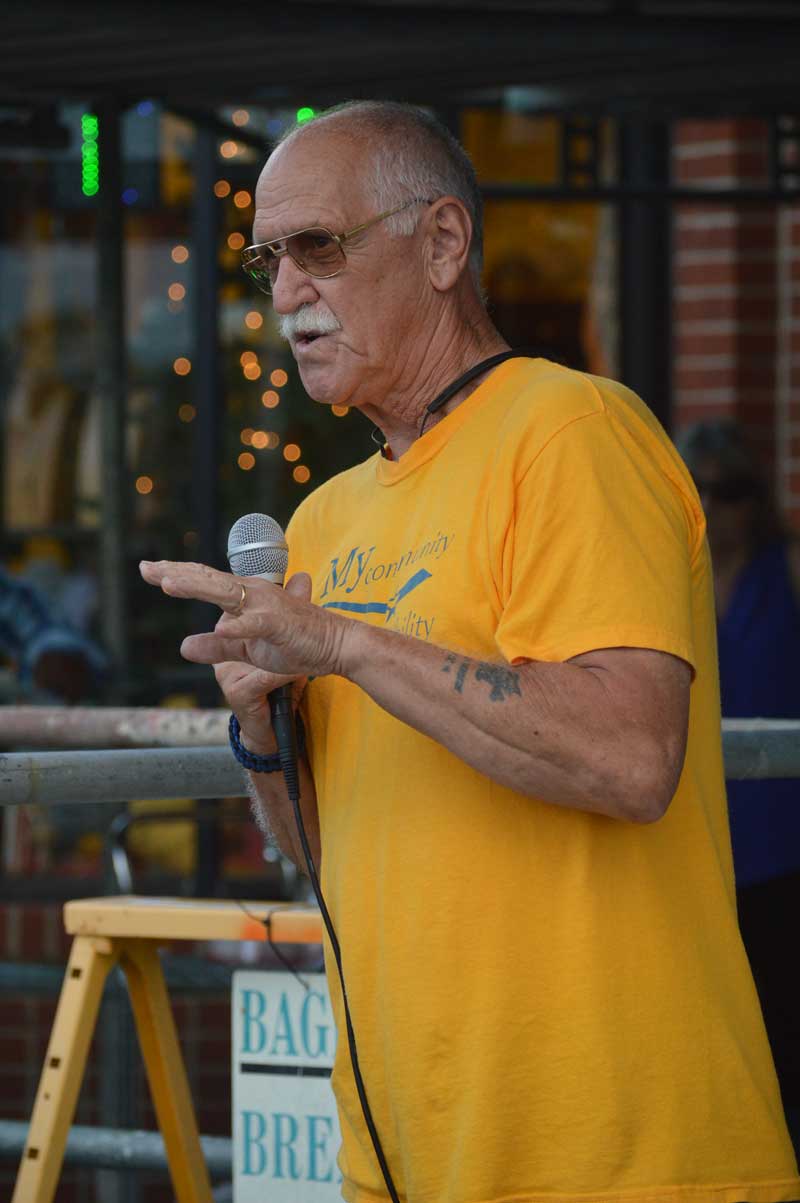 Pat Morton is looking to continue his “quiet force” on the commission in Holmes Beach. 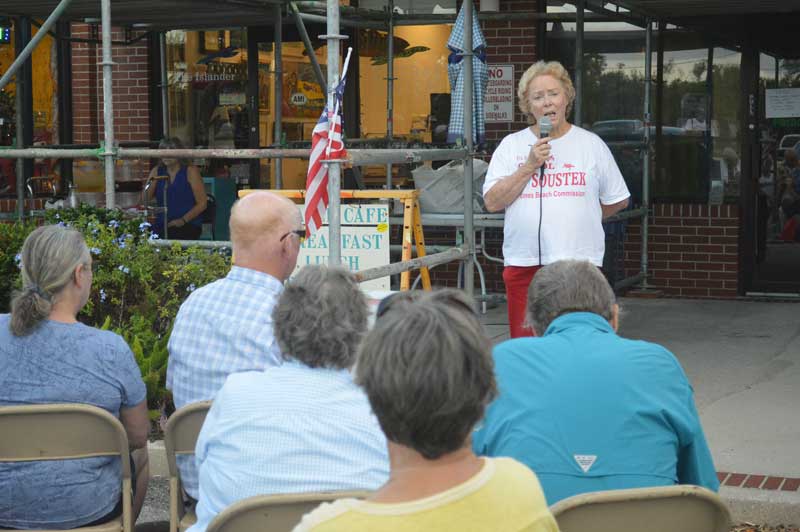 Holmes Beach Commissioner Carol Soustek, who is running for re-election. 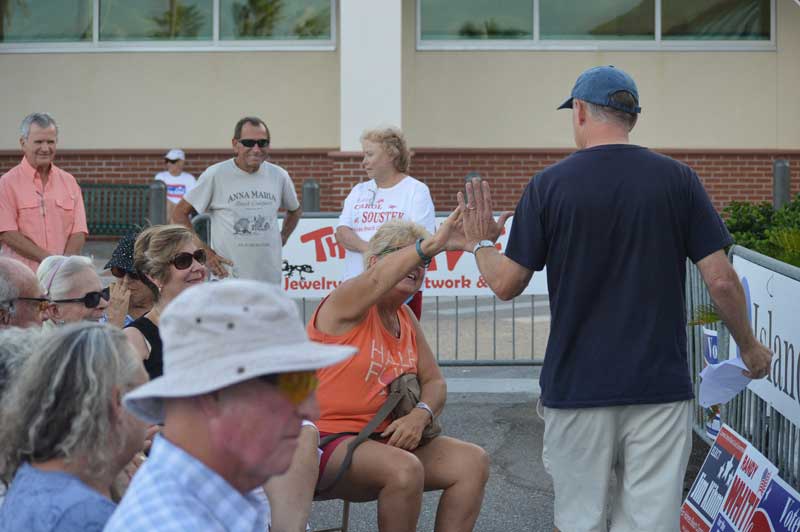 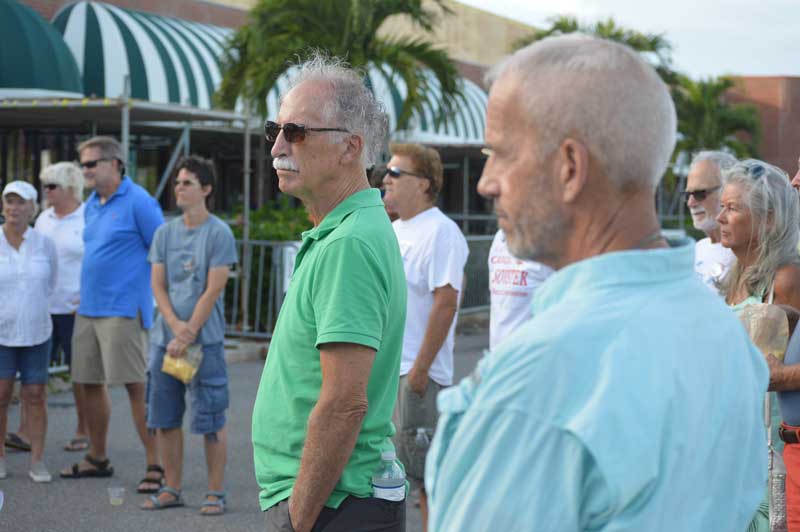 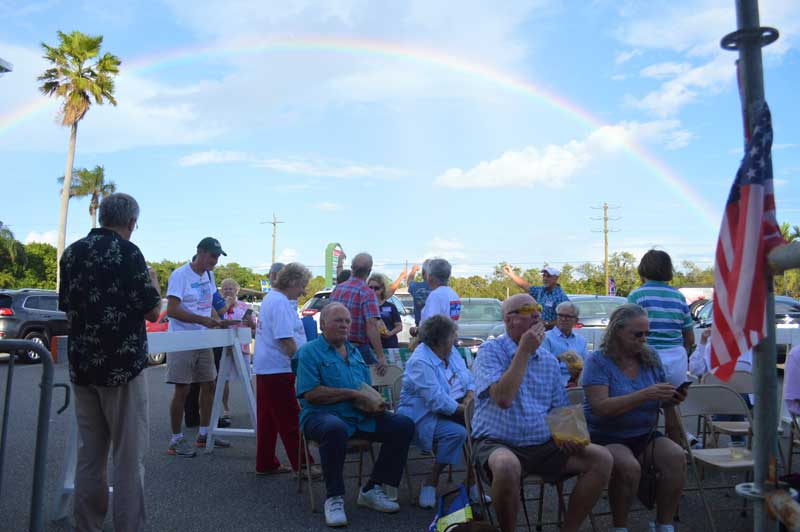 Candidates in contested races in all three Anna Maria Island cities could be found in one place Oct. 13 — The Islander’s annual Popcorn and Politics meet-and-greet.

A handful of free popcorn, in some cases a sip of wine or two or a cold bottled water, and candidates were off and running at the newspaper office, 3218 E. Bay Drive, Holmes Beach.

The candidates were gathered to ask for votes on Election Day, Nov. 7.

The old-fashioned political rally on the sidewalk at the Anna Maria Island Centre drew candidates from Anna Maria, Bradenton Beach and Holmes Beach.

Issues dominating the discussion before a crowd of about 60-75 attendees included preserving the power of home rule against Tallahassee’s intrusion, short-term rental regulations, storm recovery and balanced budgets.

Three incumbents and one newcomer are vying to fill three open terms on the Anna Maria City Commission.

Terms are expiring for incumbents Carol Carter, Doug Copeland and Dale Woodland. New candidate Laurie Jo Higgins is hoping to bump one from their seat.

Woodland, with 14 years in office, called himself a public servant, not a politician. He said restoration of the Anna Maria City Pier is the top issue for his constituency.

Higgins, a 22-year resident of Anna Maria Island and a newcomer to politics, said she cares about a number of issues, including rising taxes, restoration of the pier, the plight of small-business owners and $190,000 in parking fines assessed in Anna Maria last year.

Carter was attending a family wedding in Easton, Maryland, but sent a message to voters asking for a third term.

“I want to support you, champion home rule, promote a sense of community and help sustain our way of life for the foreseeable future,” Carter wrote.

Copeland did not attend.

Bradenton Beach Mayor Bill Shearon is being challenged for his seat by Vice Mayor John Chappie.

Shearon said he’s proud of the progress made in his two years in office. He said deficit spending has been stopped and the budget has been balanced during his term.

“That’s a major achievement,” he said.

Other issues Chappie raised included a balanced budget, the economy, accountability and the environment, saying, “It’s so important we don’t forget what we have here.”

Cole touted a balanced budget, funding for the floating dock and a clean audit of city finances during his first term.

“I really like what we’ve got going,” he said.

White said he’s the “new kid on the block,” adding, however, that he has “been around the block.”

“I believe the commission and city hall need to listen to the residents first and foremost,” White said.

He championed “direct democracy” and was first to invoke singer-songwriter Joni Mitchell.

“Don’t pave over paradise to put up a parking lot,” he said, paraphrasing her hit song, “Big Yellow Taxi.”

There are 732 registered voters in Bradenton Beach, where Commissioner Jake Spooner has been re-elected unopposed.

Three Holmes Beach incumbents and two new candidates are vying to fill four open seats. The top four vote-getters from 2,780 registered voters will take office, three for two-year terms and one for a year.

Grossman led off by holding up his own drawing of a party house in full swing. He said controls are starting to be clamped on runaway rowdies and the next step is to successfully indoctrinate visitors into the community.

“We all have the right to the quiet enjoyment of our homes,” he said. “It’s a basic right.”

Political newcomer Hurst, a Holmes Beach resident since 2013, said he’s concerned by the erosion of community and the loss of island events. He said he wants to live in a community focused on community activities.

The number of Kihm campaign shirts worn by guests at the rally was noticeable. The political neophyte said he will concentrate on quality of life issues if elected, including working to direct more tourism tax dollars back to Holmes Beach.

“I am running for Holmes Beach Commission because I feel my background and qualifications will make a positive contribution to the city,” Kihm said.

Morton wore a campaign shirt bearing his message: “My community. My responsibility.” The 14-year commissioner hailed the city’s efforts during the recovery from Hurricane Irma and said he’s still focused on community betterment.

“I’ve taken it seriously,” he said.

Soustek, a three-year incumbent, earned one of the biggest laughs of the evening as the final campaigner to appear.
“I’m here to keep my job,” she said, tongue firmly in cheek. “It pays so well.”

Soustek touted the Holmes Beach budget-deficit recovery and said her term has been marked by strengthening ordinances and playing a role in more firmly enforcing them.

“We may appear to be slow sometimes, but that’s because we’re going to get it right,” she said.

The event concluded in one hour.

And the popcorn bin was emptied.