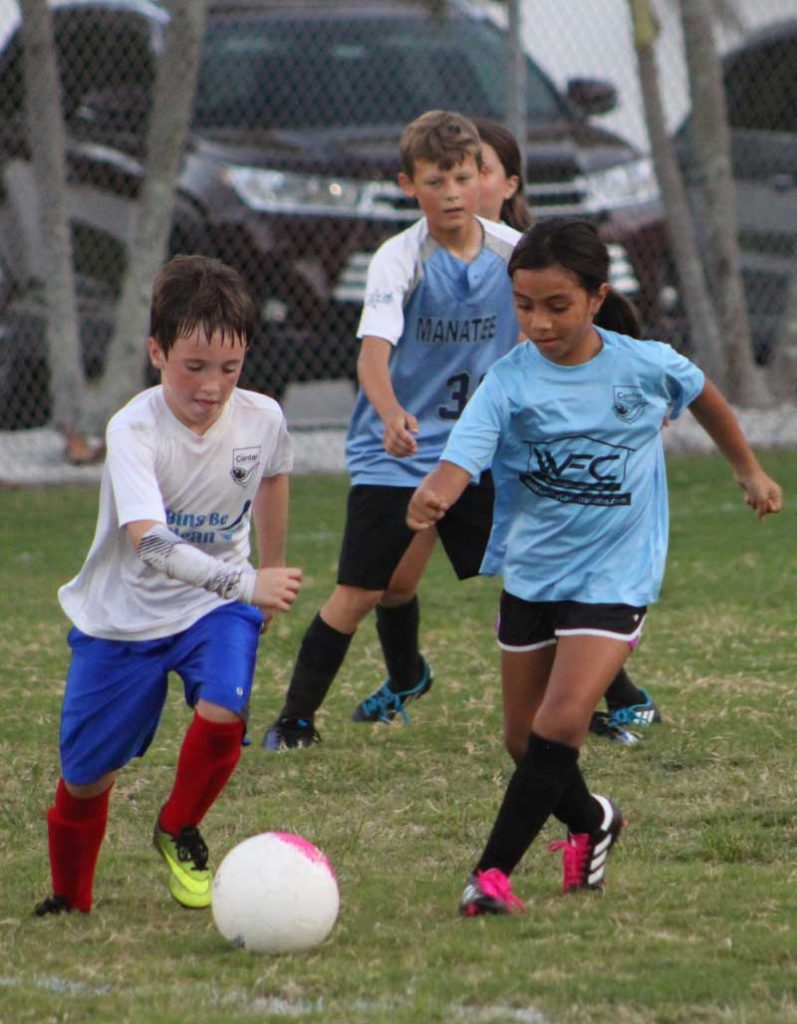 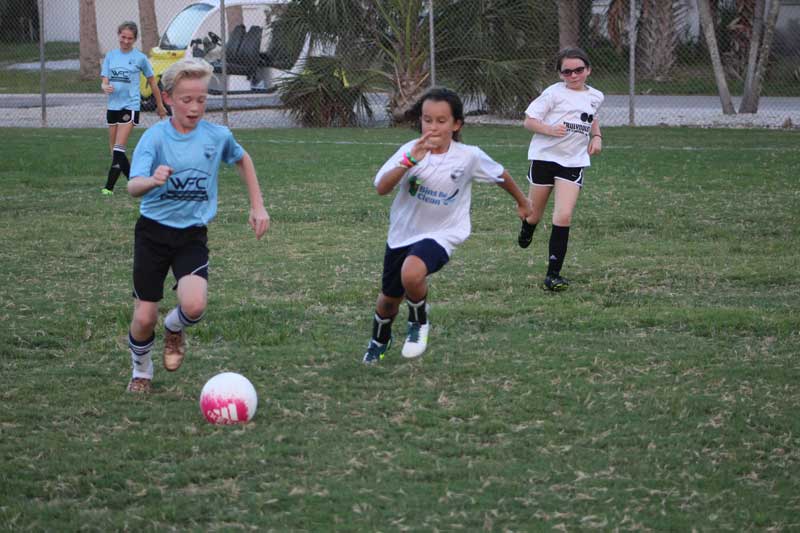 They say the cream rises to the top and that appears to be happening in the youth soccer league at the Center of Anna Maria Island. The two-team 11-14 league started out with a tie and a loss, but, Truly Nolen since has run off three successive victories to improve to 4-0-1 as Slim’s Place fell to 0-4-1 after dropping a 5-3 decision Oct. 10 and a forfeit Oct. 14.

The 8-10 division is tighter, but it appears Progressive Cabinetry is on top of its class — currently 4-1 on the season. Wash Family Construction and Bins Be Clean, which both sport 3-2 records, may debate that statement. Meanwhile, Blue Lagoon is alone in last place, still searching for its first victory.

Wash took on Bins Be Clean Oct. 10 and came away with a hard-fought 2-1 victory. Bins Be Clean got on the scoreboard in the 10th minute when an own goal from Wash gave them a 1-0 lead.

With about six minutes left in the first half, Lincoln Sauls got free and scored to tie the game at 1-1.

The second half saw Bins Be Clean come out strong as Jackson Pakbaz carried the ball up the left side and fired a shot from close range that Kendall Rice somehow blocked to keep the game tied.

Riley Lawson almost gave WFC its first lead two minutes later when he picked off a goal kick and unleashed a rocket that caromed off the post.

WFC finally took the lead with 7:03 to play as Peyton Harlan got loose on a breakaway and produced a goal for a 2-1 lead.

Bins Be Clean looked to tie the score with 3:43 to play when Pakbaz carried the ball up the right side and crossed inside to Connor Samblis, but the volley was just wide and WFC held on for a 2-1 victory.

Action Oct. 14 in the 8-10 division saw Bins Be Clean edge Blue Lagoon 3-2 behind two goals from David Patterson and a goal from Gabriella Gilbert. Tori Hurst and Samblis added assists, while Jaxon Henry made two saves in goal.

Frankie Coleman led Blue Lagoon with a goal and an assist, while Caden Quimby scored. Goalie Victor Albrecht helped keep Blue Lagoon in the game with five saves in the loss.

Progressive Cabinetry rolled to a 5-1 victory over Wash Family Construction in the morning’s second 8-10 division game behind four goals from Jack Mattick.

Jax Kagin added a goal and an assist, while Lily Kawahata finished with three saves in the win.

Peyton Harlan scored the lone goal in the loss for Wash on an assist from Riley Lawson.

Dom Livedoti and Jay Disbrow were the outright winners after posting the only 3-0 pool play record in the Oct. 11 horseshoe action at the Anna Maria City Hall horseshoe pits.

Three teams advanced to the knockout round Oct. 14 with matching 2-1 records. The team of Sam Samuels and Tim Sofran drew the bye and watched as

Golfers at the Key Royale Club in Holmes Beach got back to a normal schedule after interruptions from bad weather and storm cleanup.

The men played a nine-hole modified-Stableford system match Oct. 9. Tom McDonnell grabbed individual honors with a plus-7, while Bill Shuman took second place with a plus-5 and Tim Friesen finished in third place with a score of plus-3.

Shuman’s score helped his mates, Marty Hicks and Diane Miller, to the team title with a score of plus-3.

The women played a regular nine-hole individual-low-net-match Oct. 10. Helen Pollock, Phyllis Roe and Fran Barford each carded 1-over-par 33s to finish in a three-way tie for first place in Flight A.

Penny Auch took first place in Flight B with a score of 5-over-par 37.

The side game of the day was tee-to-green and Phyllis Roe took first place with 25 strokes.

The men were back on the course Oct. 12 for a nine-hole scramble. Art McMillan, Larry Pippel, Jeff Rodencal and Quentin Talbert matched the 4-under-par 28 carded by John Cassese, Jerry Elson, Bob Leedham and Dan Richardson to share clubhouse bragging rights for the day.

The Center of Anna Maria Island is bringing youth wrestling to the mat in its fall programming.

Instructors will teach techniques to all experience levels and the club is expected to travel on weekends to regional tournaments.

Practice will be 5-6 p.m. Wednesdays-Thursdays at the start of the season, which will open Nov. 1.