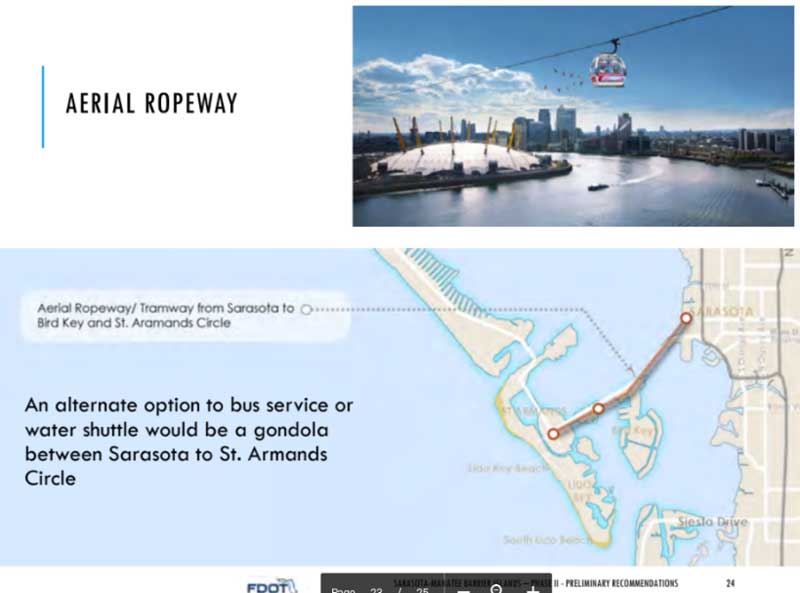 The most expensive idea in the Florida Department of Transportation barrier island traffic study is a $30 million aerial tramline stretching from Sarasota across Sarasota Bay into Bird Key and St. Armands Circle. Islander graphic courtesy DOT 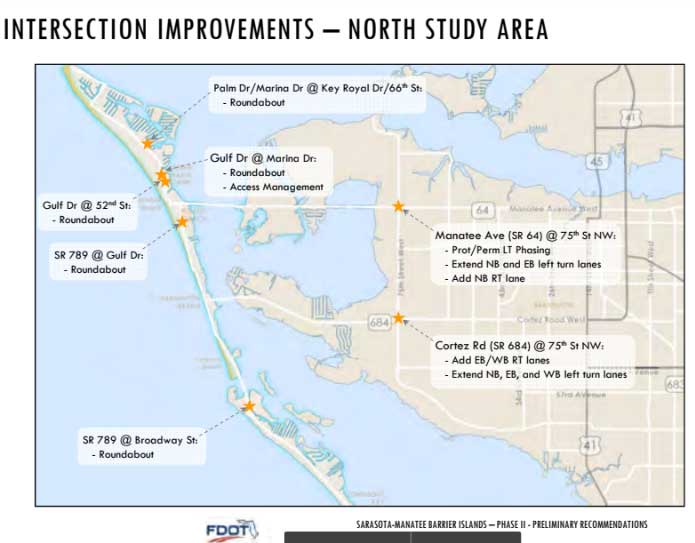 Four roundabouts in Holmes Beach and one in Bradenton Beach would improve traffic flow, according to a Florida Department of Transportation study. Islander Graphic: Courtesy DOT

The Florida Department of Transportation barrier island traffic study has discarded the possibility of a third bridge to ease vehicle pressure by connecting the mainland with Longboat Key.

That’s about the only option the DOT has ruled out in its quest to improve barrier island traffic flow from Anna Maria Island southward to Lido Key.

In the second phase of a $675,000 barrier island mobility study, gondolas, water taxis, roundabouts and even aerial trams are included among the 64 suggested improvements.

The most expensive idea would be stretching a $30 million aerial tramline from Sarasota across Sarasota Bay to Bird Key and St. Armands Circle. Using gondolas — long narrow boats suitable for a few passengers — would be less expensive, but also would create an attraction, according to the study.

Encouraging alternate modes of transportation and parking and intersection improvements make up the majority of suggestions in the second phase of the traffic study.

DOT project manager Frank Domingo and Tricia Labud, District 1 traffic operations spokeswoman, said no magic bullet can improve barrier island traffic flow, while speaking at an Oct. 23 meeting of the Sarasota/Manatee Metropolitan Planning Organization, which was created in the 1950s to provide a local voice for the state on transportation issues.

“There’s not going to be one big solution,” said Domingo, a consultant with Stantec Consulting Services of Sarasota, the company contracted for the study. “There’s going to be a lot of little ones.”

The study began in January to identify traffic problems and solutions involving vehicles, parking, bicycles and pedestrians on the barrier islands.

The study area is divided into zones: Anna Maria and Holmes Beach in Zone 1, Bradenton Beach in Zone 2 and Longboat Key, St. Armands Circle and Lido Key in Zone 3.

Fourteen suggestions could be incorporated in all three zones, according to the study, while 21 suggestions were outlined for Zone 1 only, seven for Zone 2 and 22 for Zone 3.

Roundabouts can be installed for an average of $180,000, according to the study.

A water taxi from Holmes Beach to Coquina Beach in Bradenton Beach, establishing a transit-only lane on the roadway and using a 10-passenger ferry shuttle from Cortez to the island are long-term suggestions.

Bradenton Beach suggestions also include charging for Coquina Beach parking to encourage park-and-ride participation, installing right-turn lanes on Cortez Road at the intersection with 75th Street West, installing a roundabout on State Road 789-Gulf of Mexico Drive at Broadway Street on Longboat Key and installing an electronic way-finding system, which will enable motorists to use off-island parking.

Phase two of the barrier island traffic study will be presented at the next MPO meeting at 9:30 a.m. Monday, Dec. 18, at the Holiday Inn-Sarasota Airport, 8009 15th St. E., Sarasota.