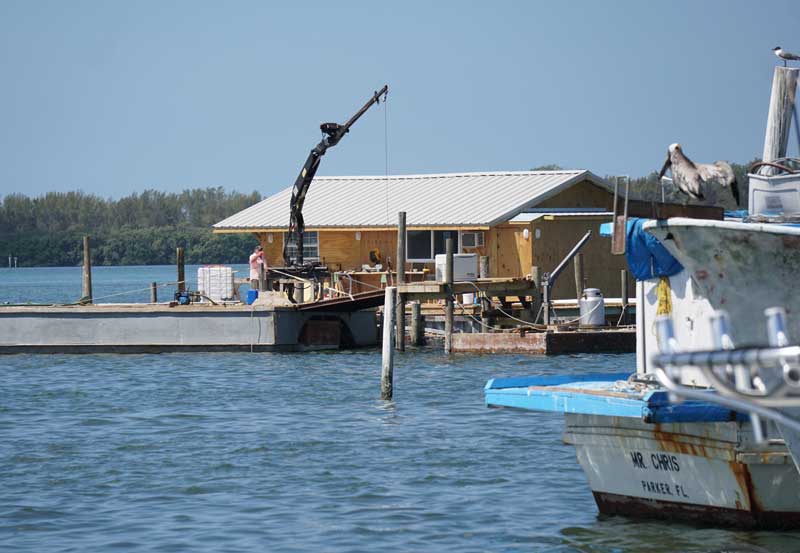 The house built in 2017 near the Cortez docks in Sarasota Bay must be removed, according to a final order from the Florida Department of Environmental Protection. Islander Photo: Kathy Prucnell

The Florida Department of Environmental Protection has issued a final order to Raymond Guthrie Jr. to remove his house on stilts in Sarasota Bay.

Guthrie has 30 days to file a court appeal, according to the final order.

The DEP adopted findings from an Oct. 19 Notice of Violation, Orders for Corrective Action and Administrative Penalty Assessment, previously sent to Guthrie as “binding and final.”

The final order states Guthrie received the notice Oct. 27 and didn’t respond in writing or request a hearing within 20 days, as instructed by the document.

Thus, the orders — including the removal and fines — are final.

Semmer said she’s personally been hit hard by Hurricane Irma and needed more time to show why the DEP should grandfather Guthrie’s structure and “would still like to try to mediate.”

Guthrie is in the process of hiring an attorney, she said.

“I’m trying to help him out,” adding she works on DEP permitting issues and she’s not an attorney.

Semmer said she called four DEP officials “who didn’t pick up the phone” the day before the agency issued the Nov. 17 order

With the help of Capt. Tom Mora, Guthrie built the house and dock in early 2017 in the bay — designated among the state’s Outstanding Florida Waters — about 350 feet from the A.P. Bell Fish Co. docks.

Guthrie said he wanted to conduct seagrass experiments at night from the house.

After DEP inspections and meetings in May and June, the DEP concluded Guthrie should have obtained permits before constructing the enclosed structure on state-owned submerged lands.

Guthrie was offered a consent order in August, which would have allowed him to apply for an exception — a Butler Act disclaimer — for structures built on sovereign submerged lands before 1951.

While Guthrie signed the proposed order, he struck out on three DEP conditions. The rejected provisions would have waived his right to an administrative hearing, admitted state law violations and acknowledged regulations he’d have to abide by even if his structure qualified for the Butler Act disclaimer, such as downsizing the structure to at least 500 square feet.

DEP spokeswoman Shannon Herbon said Guthrie was given a second chance to sign the consent order but, as he did not, the orders were issued.

About Semmer’s attempts to contact DEP before the final order’s issuance, several DEP staffers received her messages and Richard Maloy, bureau chief of surveying and mapping, called her and left a message the next day.

However, as of Nov. 21, according to Herbon, Semmer has not returned his call.