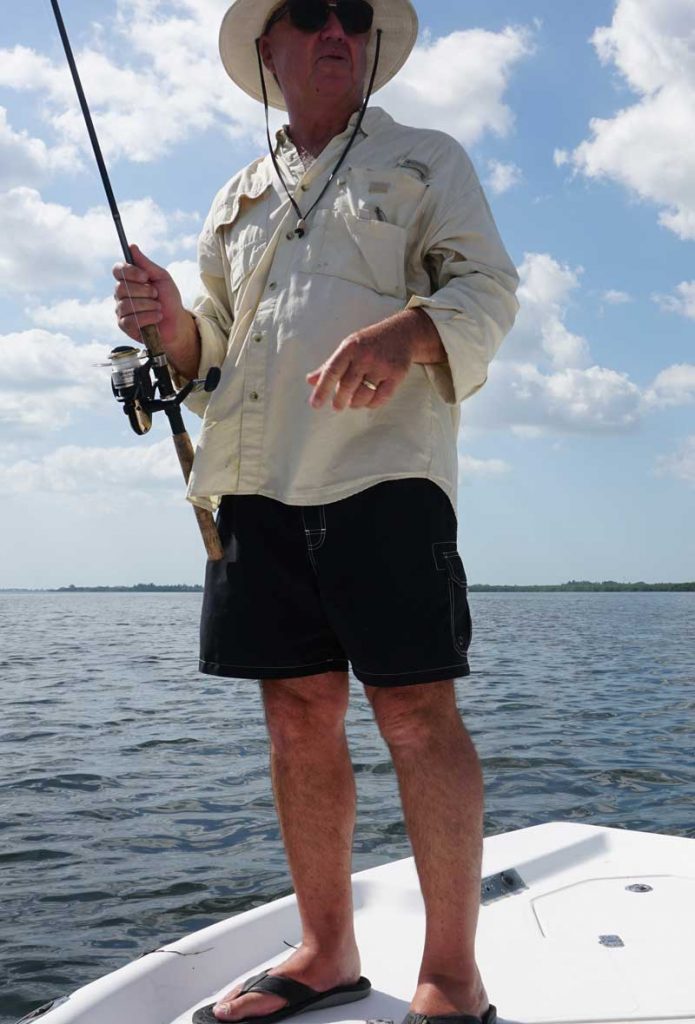 Joe McClash, former Manatee County commissioner, fishes in Sarasota Bay while looking toward the shoreline proposed for use as a mitigation bank adjacent to the future Aqua by the Bay development. Islander Photo: Kathy Prucnell

Next up in a dispute over a pristine stretch of Sarasota Bay coastline is a Dec. 5 hearing that pits two nonprofits and a former Manatee County commissioner against developers and the Florida Department of Environmental Protection.

Environmentalists Joe McClash, Suncoast Waterkeeper Inc., and the Florida Institute for Saltwater Heritage are challenging the DEP’s “intent to issue” a permit to operate a mitigation bank to Long Bar Pointe LLLP, controlled by developers Carlos Beruff and Larry Lieberman.

The DEP issued its conditional approval in December 2016 and the environmentalists followed in February with a challenge.

Suncoast Waterkeeper’s mission is to protect and restore the waters of Sarasota and Manatee counties through enforcement and advocacy.

FISH is a group of some 180 members dedicated to preserving the Cortez maritime community.

Proposed for 261 acres of mostly submerged lands south and east of Cortez, the bank would form part of a 529-acre, mixed-use development. Manatee County commissioners approved Aqua by the Bay in October for 2,894 homes and 78,000 square feet of commercial space.

The DEP permit — if upheld by a judge appointed by the state Department of Administrative Hearings — would allow the developers to sell 18.01 credits: 7.38 for seagrass-dominated submerged bottomlands, 0.23 for salt marsh, 7.07 for mangrove swamps, 0.68 for trimmed mangrove hedge and 2.65 for coastal freshwater marsh.

At a price of $100,000-$200,000 a credit, the operators could profit from the sale of credits to developers — even the Beruff-Lieberman entity — as a trade-off for wetland destruction in Manatee, Sarasota and Charlotte counties.

“The bank would generate millions of dollars for Beruff and set terrible precedents and do almost nothing for the environment,” Smith said in a Nov. 19 news release.

In addition to the DEP permit, the bank operator will need approvals from the U.S. Army Corps of Engineers to sell mitigation credits to developers whose plans destroy federal wetlands.

The federal regulator denied permit applications from the Beruff-Lieberman partnership this year on May 5, and also in September 2016.

According to DEP communications director Lauren Engel, the agency stands by its intent to issue the permit and won’t comment on pending litigation.