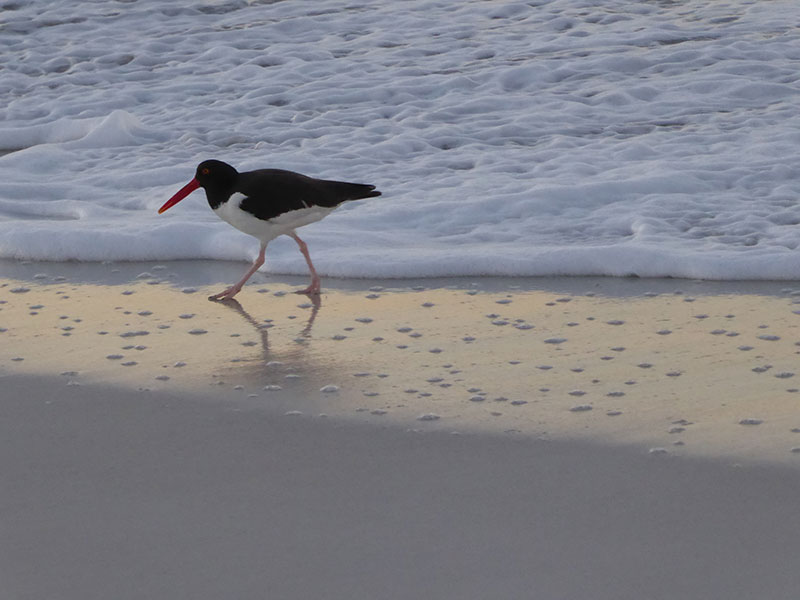 An American oystercatcher combs the water’s edge of the Gulf of Mexico for food Dec. 11, 2017, near the 5600 block of Gulf Drive in Holmes Beach. Islander Photo: Courtesy Pete Gross

Winter on Anna Maria Island provides an opportunity to see shorebirds on their winter migration.

This time of year also provides state and federal organizations an opportunity to work with local groups to survey migratory shorebirds that may be in decline.

The Florida Fish and Wildlife Conservation Commission, as a partner in the “American oystercatcher working group,” is repeating a survey it partnered on five years ago with other state and national agencies, to determine population status and trends across the East Coast and Gulf of Mexico coastline, where the birds winter.

The American oystercatcher, which inhabits a variety of coastal habitats, is a winter visitor to the island and its population has been dropping for several years. It is designated “threatened” by the state and is not listed, but considered a “species of high concern” by the federal government.

The pair covered the beaches on an ATV, counting migratory shorebirds, including sanderlings, willets and ruddy turnstones.

While oystercatchers were seen in late 2017 and early January on the beaches, Fox and Coyne did not spot any Jan. 16.

Fox said for several years, off-and-on, she has seen a flock of about 25 oystercatchers on the beach near the 5000 block of Gulf Drive in Holmes Beach.

“When there are only 25 birds you really notice when there are even one or two less when they return the following year,” Fox said.

While Fox and Coyne conducted their survey on the beach, a pilot flew over in a plane for an aerial survey of the Gulf Coast.

According to the FWC, the survey will provide an estimation of the oystercatcher population, allowing agencies to map population distribution, roost sites and track habitat change and availability. Data from the survey will help conservationists develop a plan to protect the species.

“This is invaluable info for the FWC,” Fox said. “If the birds need to be moved into a more protected category for conservation, these surveys are how we know.”

For more information about shorebirds or to report a sick or injured shorebird, contact Fox at suzilfox@gmail.com or 941-778-5638.