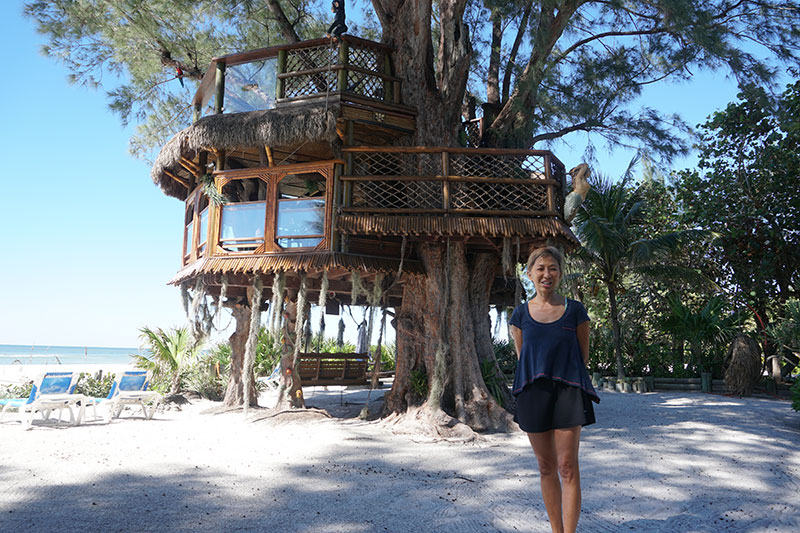 Lynn Tran talks in November 2017 with The Islander about her desire to keep the treehouse she and husband Richard Hazen built on the beachfront around an Australian pine tree. The two-level treehouse has windows and solar electricity. Islander Photo: Kathy Prucnell 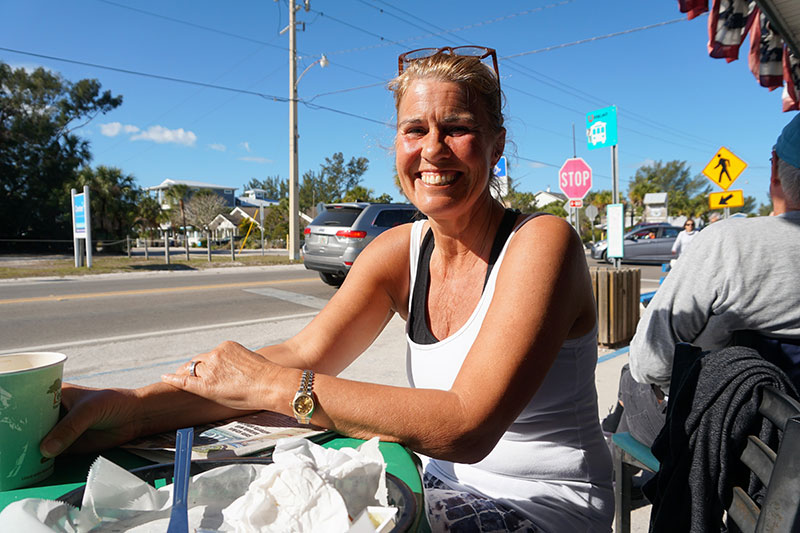 Sharron Hadden of Indiana, Great Britain, and a regular Anna Maria visitor, sides with the city Jan. 16 in the treehouse dispute. She believes the beachfront structure must come down to protect against setting a precedent in sensitive coastal areas. 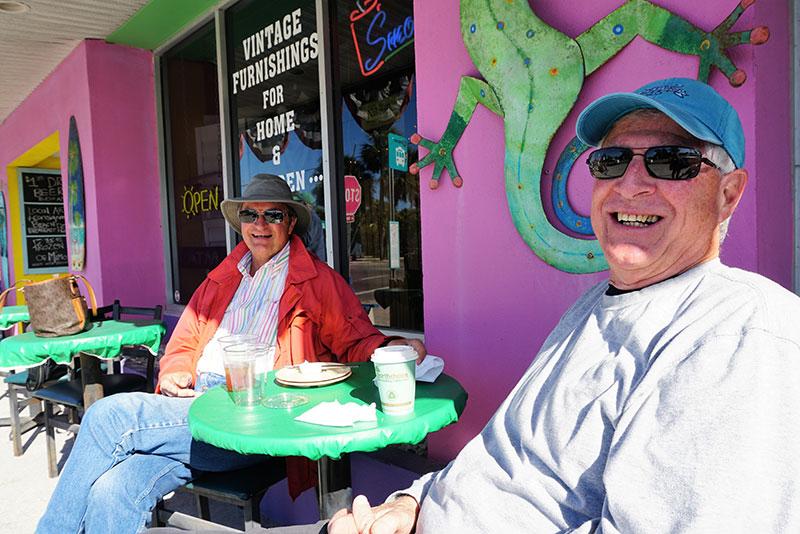 Malcolm Shantz and Ron Beveridge, of Holmes Beach and originally from Ontario, Canada, agree with the city’s stance Jan. 16 and believe the treehouse must come down. Shantz believes a compromise should’ve been worked out earlier, but now it’s too late. Beveridge said, “If they get away with it, others will do the same thing.”

It’s time to knock it down.

The nearly five-year legal battle waged between the city of Holmes Beach and the owners of an illegal beachfront treehouse is entering its final stages.

Or so the city hopes.

The city issued a code enforcement notice Jan. 18 directing the treehouse owners to apply for a demolition permit. Failure to do so within three weeks likely would result in a city lawsuit to force compliance, according to Mayor Bob Johnson.

After the U.S. Supreme Court declined to hear a petition filed by Lynn Tran and husband Richard Hazen, the treehouse owners said they would ask the city for a reprieve from demolition for the treehouse at their property at 103 29th St., which includes their home and four short-term rental units named Angelinos Sea Lodge.

“We had planned to ask the city leaders for reconsideration, taking into account the fact that there are many others who have asked the treehouse to stay from near and far, all the way to London, Germany and Spain,” Tran wrote in a Jan. 19 email to The Islander.

Those hopes were dashed by the city notice, Tran wrote.

“To our disappointment, we received a code enforcement notice from the mayor to apply for a demolition permit, following the order of the defunct code enforcement board back in 2013,” Tran wrote. “We don’t have a plan today.”

Johnson said Tran and Hazen have until Feb. 9 to apply for a permit to demolish the structure, which was built in 2011 without city or state permits.

Tran said earlier in January she would ask for a meeting to pursue saving the treehouse. Instead, the city issued what amounts to an ultimatum.

Tran and Hazen have been under city order to remove the treehouse since 2013.

The city of Holmes Beach received more than 50 emails — pro and con — over its handling of the treehouse owned by Lynn Tran and Richard Hazen on the beachfront at 103 29th St., which includes their home and four short-term rental units named Angelinos Sea Lodge.

Here are a few of them:

“The treehouse crew has always preferred the court of public opinion to the rule of law. They sued. They lost. It’s $140,000 too late to negotiate.”

“When is it coming down and when are they paying the fine? It is ridiculous how much they have cost us in tax dollars over something that should have been torn down three years ago.”

“Count this one for tearing the treehouse down now. It is an illegal eyesore.”

“These treehouse owners have made the city spend our tax dollars to fight their foolish pursuit. It would be very wrong for the city to now change course and allow them to keep their treehouse.”

“She cost this town. Stick with the law and tear it down.”

“We are so upset and disappointed to see you are ordering the demolition of the treehouse.”

“As a result of the way you choose to treat your citizens, my wife and I will no longer visit your community for any reason.”

“Don’t you have anything better to do than worry about tearing down that treehouse? We will not be visiting your town any more.”

“Your city’s handling of this treehouse problem has been disgraceful.”

Street views on the treehouse

text and photos by Kathy Prucnell