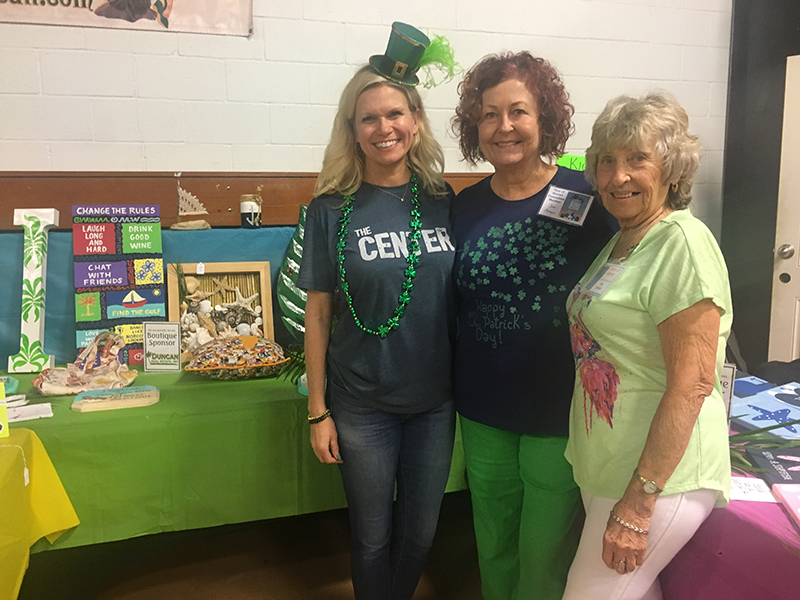 Center of Anna Maria Island board member Karen Harllee, left, Joan Pettigrew, a contributor to the raffle quilt, and volunteer Jan Bryant pose March 17 in the Tropical Treasures boutique during the tour of homes. The center raised $25,000 from the event. Islander Photo: Bianca Benedí

While the search for a new executive director continues, the Center of Anna Maria Island board is keeping the ship afloat.

At their March meeting, board members discussed the search for a director, policies and procedures for the interim and also finances.

It was the first general meeting for interim director Carl Weeks, hired at the beginning of the month to succeed former executive director Kristen Lessig.

Income is up, but below expectations

While net numbers were not available for the tour of homes, the center reported more than 700 tourgoers contributed to a gross income of more than $25,000.

Board member Karen Harllee reported vendors were happy with the tour bazaar, including the new location in the center gym rather than a tour home. Some shoppers weren’t on the tour, she said.

Harllee proposed placing greater emphasis on the bazaar as a fundraising focal point.

Despite a positive net income, however, donation funding has not flowed as freely as the center planned in its budget.

Donations and the dinner-mystery theater event staged in February brought in $48,000, but $80,000 was projected.

In December 2017, Hicks issued a preliminary outlook of the center’s finances for the remainder of the fiscal year, which ends June 30. She expected the center would finish the year with a net income of $75,000. Her projection is now $25,000 by year end.

The February financial report indicated more than $20,000 in unanticipated expenses in December, including the cost of searching for a new executive director, professional fees for a CPA to take over the payroll and an “additional bill” from the auditors.

In addition to reviewing finances at the meeting, the board adopted a resolution affirming its commitment to provide financial and operating records to the city of Anna Maria.

Anna Maria Commissioner Brian Seymour, liaison to the center, said the resolution was a good step.

“We want to help the center succeed … You guys are fulfilling a big part of our comprehensive plan,” Seymour said, referring to the city’s “recreation and wellness needs.”

Board members also discussed what role Heather Darling, selected by former executive director Kristen Lessig to take on some developmental tasks at the center, would be in the remainder of the fiscal year.

Darling had been tasked at the January board meeting with organizing the March tour of homes, a fundraising drive in May, and grant writing.

However, board members raised questions March 19 about how effective Darling was at her job.

Chair David Zaccagnino said although Darling was to serve as a “point person” for the tour, she was absent from the event.

Weeks said Darling’s input on the Giving Challenge scheduled for May 1 would be critical to fundraising and messaging.

The Giving Challenge, hosted by the Patterson Foundation of Sarasota, is an annual 24-hour online fundraiser for nonprofits in Sarasota-Manatee.

Unique donations made during the challenge are matched 100 percent by Patterson.

“Sometimes you have to take a leap of faith with development people, because they’re a different breed … I don’t believe what we have right now is the right person,” he said. A good development director should bring in “at least three times their salary in the first year,” Weeks said.

Harllee said Darling’s role is complicated — she had been assigned to development and event organizing, two separate jobs.

Zaccagnino said if Weeks wants to keep Darling on through the Giving Challenge, her salary and duties should reflect her limited responsibilities.

Harllee also delivered an update on the search for a new executive director. Of more than 150 applicants, only a few are qualified, she said. The applicants were narrowed to those from the Sarasota-Manatee geographic area.

The center hired a search company at a cost of $2,000, according to Zaccagnino, and advertised a salary starting at $75,000.

Zaccagnino suggested the board also review the applicants for a replacement for Darling.

She said the workshop was “very insightful” in helping clarify what tasks should be taken on by board members and what should be assigned to staff.

“There has been some weird overlap” in the center’s task assignments, she said. She recommended the center use the MCF presentation to update its bylaws and procedures.