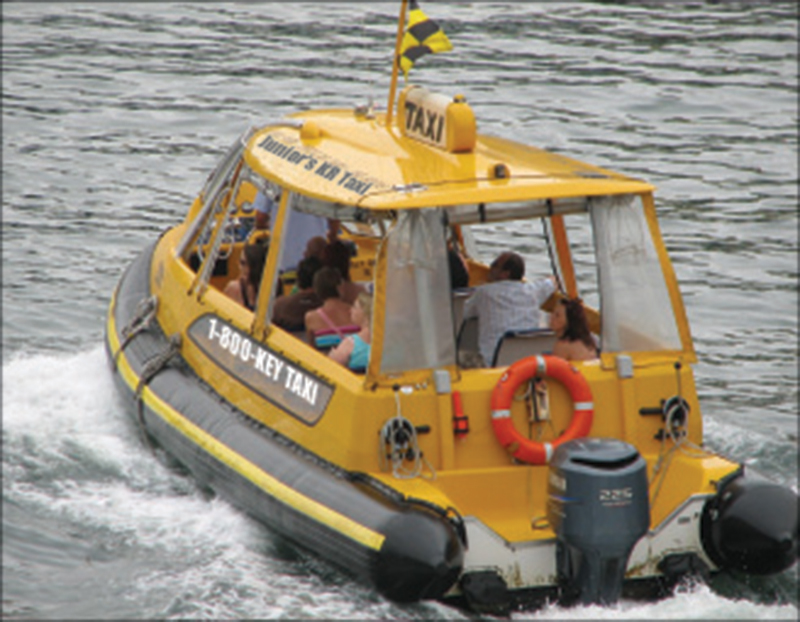 Compact water taxis modeled after this prototype are en route to Tampa from Australia for use in the new water taxi service on Key Royale. Islander Photo: Courtesy Google

Less than two months after a company began pushing for a water taxi for Key Royale in Holmes Beach, operators announced the service is set to begin April 1.

Disgruntled residents barely had time to protest and some were caught unaware of the project intended to help Key Royale residents avoid traffic jams on Marina Drive in Holmes Beach and up to Pine Avenue in Anna Maria. The service will operate exclusively in Bimini Bay and the Key Royale canals, at least for now.

Well-known Cortez fisherman Junior Godfrey is heading up the operation. He has promised to construct a boathouse in the Bimini Bay waters near the Anna Maria Yacht Basin to moor the taxis. Efforts to reach Godfrey had been unsuccessful at Islander press time.

The last stilt house built in the area was constructed in Cortez without the proper permits, according to the DEP.

Permits, however, are not a problem in Holmes Beach, according to Mayor Bob Johnson, who served on the Island Congestion Committee in 2013 and backs the new transportation option as an innovative approach to the traffic backups in the city.

“The Key Royale residents may have to get used to commercial traffic in and out of their private canals, but it will be easier and faster for them to navigate north or south once they become accustomed to the taxis,” Johnson said March 22. “And, it cuts down on the number of cars clogging the roadway.”

The KR Taxi plans to use the grand canal to allow passenger access to a trolley stop at Gloria Dei Lutheran Church for travel on land to island destinations.

“If the city does purchase the Gloria Dei property nearby, it would be beneficial to have the service in place when we close Key Royale Drive to realign the roads,” Johnson added. “That closure will take six months or more — and that’s with good weather.”

Godfrey has purchased three state-of-the-art taxis through a seafood marketing company that relocated to AMI from Australia. The boats are in transport and are scheduled to arrive in Tampa March 31 for the short run to Anna Maria.

Superintendent of public works Jim McGuinness fast-tracked the permitting for the water taxi, signing off on all necessary paperwork for KR Taxi in only 11 days.

Also, with the city’s backing, the project obtained state and federal permits for pilings and construction of the boat house, in advance.

The owners of the taxi service have shielded their identities in multiple LLCs, but local sources say Shawn Karrera, Marvin Gross, Matt Hinds and several local restaurateurs are the principals.

Key Royale residents responded to the news with  colorful commentary, eye-rolling and astonishment.

“Eleven days? Really? That has to be a permitting record,” said one resident, a former mayor of Anna Maria. “Why can’t they do that on things we want?” she continued.

Meanwhile, residents can expect to see drilling for the pilings in Bimini Bay any day and placement of a modular boat house and office.

In another twist, Godfrey had proposed using the framework from a controversial treehouse, illegally built on the beachfront at 29th Street in Holmes Beach.

However, since the owners are again filing motions to stall, those plans were scuttled.

Oh, and the cost to commute on the KR Taxi?

Editor’s Note: The KR Taxi story is reporter Sandy Ambrogi’s sense of humor at work. So, please, don’t bother your city officials or The Islander with complaints. It’s April Fools’ this week, after all. Exercise your sense of humor.

One thought on “New water-taxi has Key Royale hub”