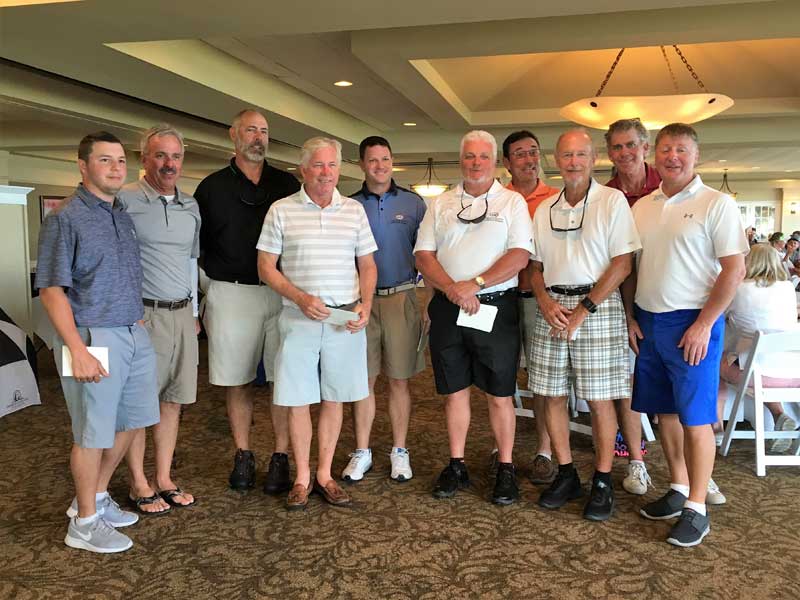 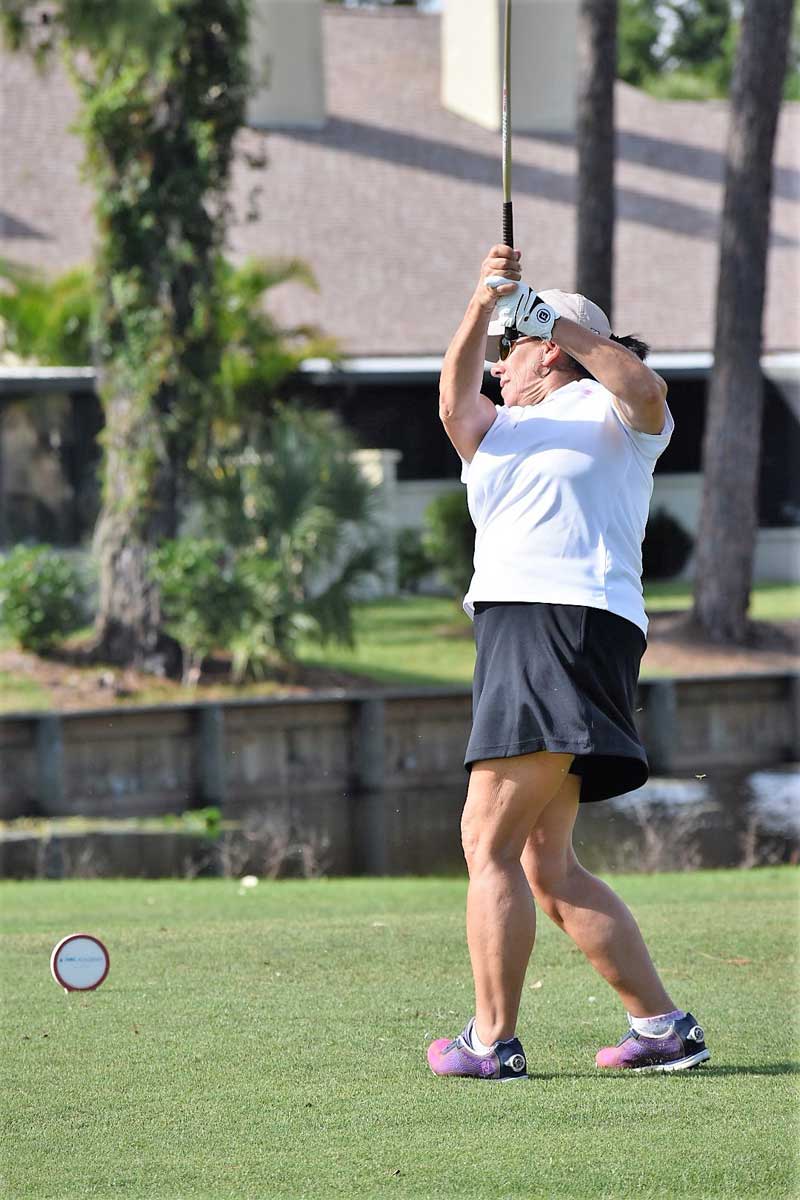 Angelle Duhaime hits off one of the tees during the Anna Maria Island Chamber of Commerce golf tournament May 18 at IMG Academy Golf Club in Bradenton. The annual tournament raises funds for the chamber’s college scholarship awards. Islander Photos: Sandy Ambrogi

Seven up, seven down. That’s how Legler & Flynn Law has done it in the adult soccer league at the Center of Anna Maria Island.

There’s been a few close calls, but Legler & Flynn improved to 7-0 after soccer action May 17 and increased its lead to two games. Lancaster Design, which fell to 5-2 with a loss last week to Sato Real Estate, held down second place. Sato improved to 4-3 and moved into third place. Slim’s Place fell to 3-2-2 thanks to a blowout loss, and Ross Built is alone in fifth with a 3-4 record. Moss Builders holds down sixth place at 2-4-1, while Mar/Kis Insurance follows at 1-5-1 and Acqua Aveda has a hold on last place with its1-6 record.

Sato opened the action with a 5-2 victory over Lancaster Design behind two goals each from Eliza Faillace and Damir Glavan. Nate Talucci completed the scoring with a goal, and Jordan Demers made six saves in the victory.

Daniel Anderson and Greg DeMeuse notched a goal each and Ricky Anderson added an assist to lead Lancaster Design in the loss.

Ross Built rolled to a 5-2 victory over Acqua Aveda behind a hat trick from Chris Klotz and a goal and an assist from Omar Polar. Greg Ross added a goal and Ben Sato helped preserve the victory with five saves between the pipes.

Eric Pullen and Scott Eason scored a goal each to lead Acqua Aveda, which received an assist from Shea Yates and five saves from Jason Sato in the loss.

Legler & Flynn Law obliterated Slim’s Place 11-1 behind three goals each from Jeremias Gramajo and Steve Oelfke and two goals each from Shay Coleman and Yorvi Moreira. Sean Flynn completed the scoring with a goal and Diego Felipe made four saves in goal.

Maxim Panchenko notched the lone goal for Slim’s Place, which also received six saves from Will Case in the loss.

Moss Builders doubled up on Mar/Kis Insurance 4-2 in the last match of the night. Stephen Adair led the way with two goals, while Ryan Moss and Jessica Williams had a goal each.

Kris Yavalar and Manoj Kumar Poudel each scored a goal and Mario Prino made six saves to lead Mar/Kis Insurance in the loss.

No surprises in youth soccer playoffs
Proving that the regular season does matter, the top seeds easily held serve during first-round playoff action May 16 in the youth soccer league at the center.

The second match of the evening saw No. 2 seed Progressive Cabinetry earn a 5-0 shutout victory over Signarama behind a hat trick from Gregory Jordan and a goal each from Kieran Cloutier and Liam Coleman.

Beckham Factor made two saves to lead Signarama in the loss.

Key Royale golf news
Rain put a damper on some of the past week’s golf action at the Key Royale Club, but the men did manage to get out a couple of times during the week, starting with a nine-hole, modified Stableford-system match May 14.

Barry Izzard grabbed clubhouse bragging rights with a score of plus-5, edging second-place finisher Jack Lowery by a point.

Izzard was big man on the links twice, helping teammates Blake Ress and Dave Richardson to a 7-under-par 25 to win the May 17 scramble.

Horseshoe news
Two teams emerged from pool play with 3-0 records and battled for the day’s supremacy during May 16 action at the Anna Maria City Hall horseshoe pits.

The team of Hank Huyghe and Rod Bussey rolled to an easy 21-11 victory over Tim Sofran and Tom Skoloda to earn the day’s bragging rights.

Huyghe was back in the winner’s circle May 19 as he walked his way to the only 3-0 record in pool play and was the day’s outright champ.

The season kicks off June 21, with all games played Thursday nights.

Cost for the league is $10 for center members and $126 for nonmembers. A $10 late fee applies for anyone who registers after the June 9 deadline.

Player evaluations and a draft will be held at 7 p.m. Tuesday, June 12.

Anyone interested in sponsoring a team or for more information, contact center recreation director, Will Schenerlein at 941-778-1908, ext. 9205, or will@centerami.org.