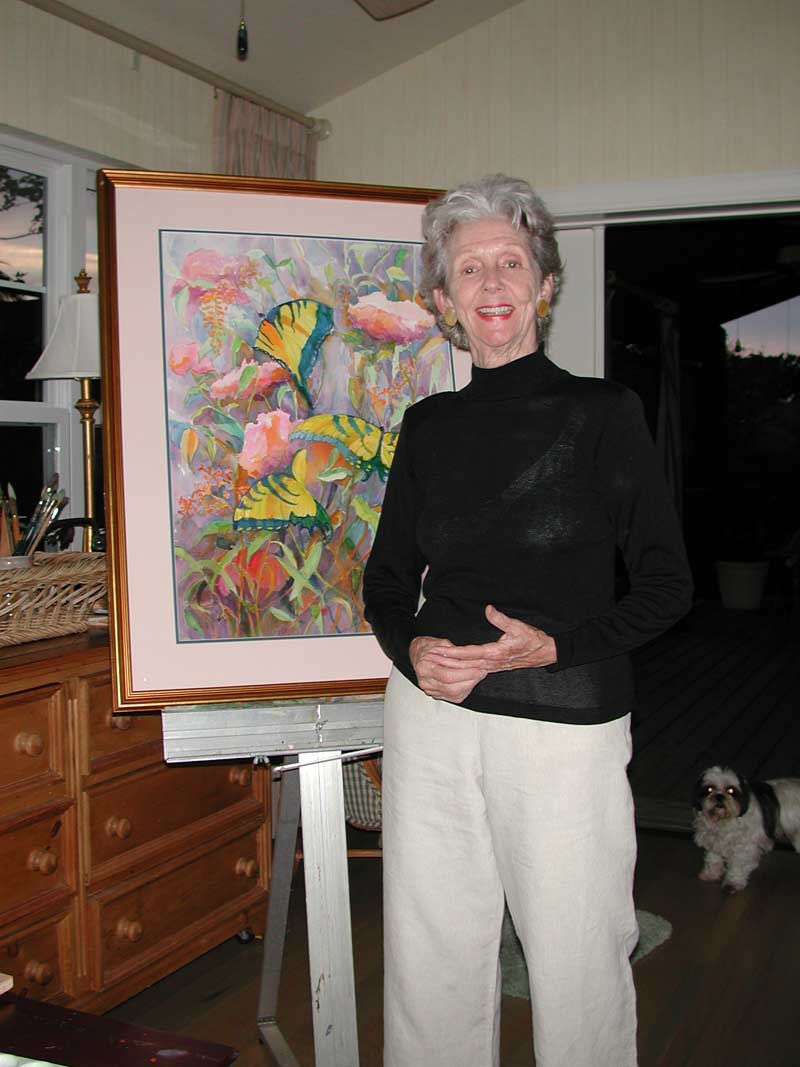 Rhea Chiles, who died in 2015, poses in her home studio in Holmes Beach. Chiles is being inducted into the Florida Tourism Hall of Fame by Visit Florida. She was nominated by Karen Riley-Love. Islander Photo: Bonner Joy

Her name is synonymous with Florida, from time well spent as first lady to her passion for painting landscapes and scenery.

Rhea Chiles died in 2015, but her legacy continues to be alive and well in the Sunshine State and, on Anna Maria Island, where she spent much of her senior years.

Chiles has been named the 2018 inductee into the Florida Tourism Hall of Fame by the Visit Florida board of directors.

Joey Bell of Visit Florida made the announcement in an email May 24. Chiles joins the likes of past distinguished Floridians — Walt Disney, Henry Flagler, John Ringling and others — in the hall of fame. She was nominated for the honor by local resident Karen Riley-Love.

Chiles was the first lady of Florida 1991-98, during the tenure of her husband, Gov. Lawton Chiles. She was a gracious champion of Florida tourism during this time, emphasizing state hospitality. That mission had begun years earlier in Washington, D.C., when Chiles opened the Florida House.

As the story goes, Chiles was passing embassy row with her children in tow when one asked where the Florida house was located. The question set Chiles on a mission to create such a space.

She found a house in a blighted Washington neighborhood, purchased it with her own money and went about finding contributors to see the Florida House to reality.

Visitors may also see some of Chiles’ art collection in the Florida House. Chiles’ creation is the only “state house” in the national capital.

Chiles spent her retirement years on Anna Maria Island, concentrating on community arts and cultural issues. She founded the Studio at Gulf and Pine, 10101 Gulf Drive, Anna Maria. Today the studio serves as an educational center, hosting everything from meetings of local organizations to art shows and fundraisers.

On Chiles death in 2015, Gov. Rick Scott issued a statement, reading in part, “Rhea leaves behind a profound legacy of service and commitment to her family, community and state. May she always be remembered for the tremendous impact she made on so many Floridians.”

The Florida Tourism Hall of Fame began in 2001. It acknowledges contemporary and historical figures whose vision, creativity and drive have had a significant impact on the development of Florida as a desirable visitor destination.

Chiles is the third woman to win the singular award — an individual or couple is chosen each year.

Chiles also was nominated for the honor last year. Both nominations were by Riley-Love, recent winner of the Manatee County Tourist Development Council’s Ambassador of the Year award and an Islander contributor. She said she felt Chiles had affected “not only our island, but Florida as a whole.”

Chiles’ induction will take place during the Florida Governor’s Conference at Champions Gate in Orlando Sept. 12-14, according to Visit Florida.

For more information about the honor, visit floridatourismhalloffame.org.