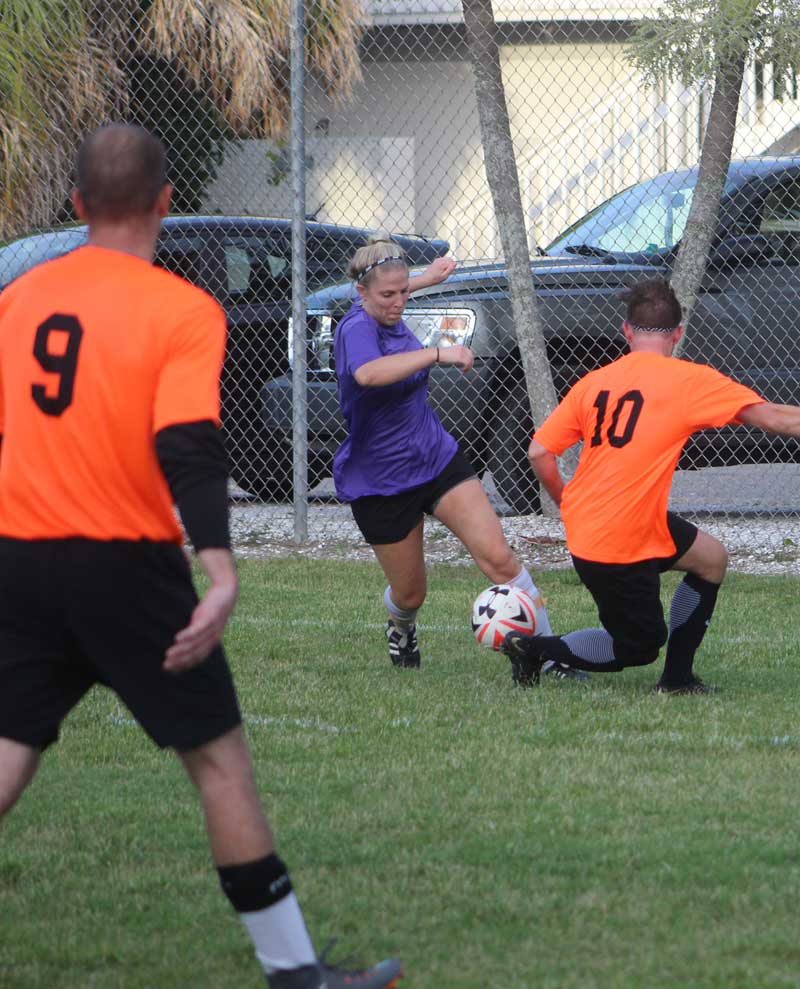 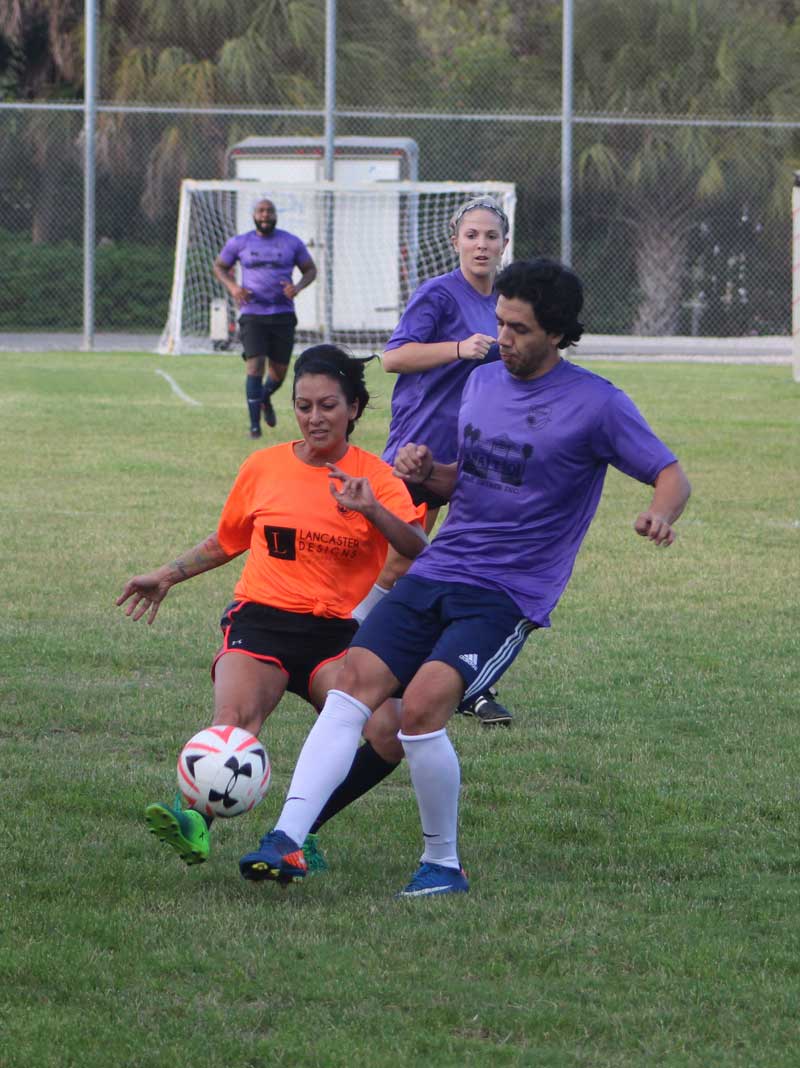 Once again the seedings held true for the adult soccer league June 7 at the Center of Anna Maria Island. No. 2 seed Lancaster Design rolled to a 7-3 victory in the first semifinal match and No. 1 seed Legler & Flynn Law held off Slim’s Place 5-4 in the day’s second semifinal game.

Lancaster defeated Sato 7-3 in a mostly one-sided match. Lancaster got on the scoreboard in the fourth minute when Sumiko Chipman, after taking a pass from Daniel Anderson, hit a floater over the head of goalie Jordan Demers for a 1-0 lead.

Sato battled back to tie the score three minutes later when Damir Glavan sent a nice pass to Francisco Oliviera on the back post.

Action went back and forth for the next few minutes until Greg DeMeuse received a pass up the left side and just kept it from going over the end line. He chipped a ball into the penalty area where Anderson volleyed it home for a 2-1 lead and just under nine minutes left in the half.

The Lancaster duo hooked up again two minutes later, this time Anderson served the ball into the area where DeMeuse volleyed it home for a 3-1 lead.

Sato came close to cutting its deficit with just over three minutes left in the half when Eliza Faillace found some space up the left side, but her left-footed blast was turned away by Lancaster goalie Trey Horne.

With just over a minute to play in the half, Sato had some bad luck. Robert Armstrong carried the ball up the right side and hit a hard cross into the goal mouth. Nate Talucci stuck his foot out to block the cross, but it caromed into the goal, giving Lancaster Design a 4-1 lead they would not relinquish.

However, Sato didn’t throw in the towel, coming out strong to open the second half. Josh Sato settled a long ball up the left side just before it crossed the end line. He cut back and blasted a rocket that beat goalie Horne near post to halve the deficit.

One minute later, Lancaster answered. DeMeuse passed to Chipman, who carried up the middle before hitting Armstrong with a beautiful through ball that he firmly deposited into the back of the net for a 5-2 lead with just over 19 minutes left to play.

Five minutes later, Lancaster extended its lead when Michael Lewis carried the ball in, drew the defender and slipped the ball to Anderson who passed the ball into the wide open goal for a 6-2 lead.

Sato continued to battle and got rewarded with 10 minutes left to play on a corner kick. Glavan served a perfect ball that Caseras rocketed into the back of the net to cut the Lancaster lead to 6-3, but time was not on their side.

Armstrong completed the scoring when he ran onto a pass up the right side and one-timed a rocket that beat Demers far post to close out a 7-3 victory.

Anderson led the way for Lancaster with two goals and an assist, and Armstrong finished with a pair of goals. Chipman and DeMeuse both added a goal and an assist, while Horne notched five saves in the victory.

Josh Sato, Oliviera and Caseras led Sato Real Estate with a goal each while Glavan added two assists. Demers finished with six saves in the loss.

The second semifinal match saw Legler & Flynn Law edge Slim’s Place 5-4 behind a pair of goals from Yorvi Moreira. Sean Flynn, Jeremias Gramajo and Amy Ivin scored a goal apiece while Diego Felipe chipped in with one assist. Flynn and Mark Rudacille combined to make six saves in the victory.

Andre Lewis scored three goals and PJ Smargisso added a goal and two assists to lead Slim’s Place, which also received six saves from Will Case in the loss.

Championship Thursday is set for June 14, starting with the third-place game between Sato Real Estate and Slim’s Place at 7 p.m., followed by the championship match between Legler & Flynn Law and Lancaster Design at 8 p.m.

Key Royale golf news
After a few weeks of abbreviated golf due to persistent rain, the members of Key Royale Club got in a full week of golf action, starting with the men playing a nine-hole modified Stableford-system match June 4. The team of John Kolojeski and Jeff Rodencal combined on a score of plus-5 to win the day’s proceedings.

The women took to the course June 5 for a nine-hole individual-low-net match in two flights. Flight A winner was Phyllis Roe, thanks to a 3-under-par 29 that was punctuated with a birdie on the second hole. Carol Duncan was two strokes back in second place, while Karen Mitchell held down third with an even-par 32.

Janet Razze’s 2-over-par 34 gave her first place in Flight B, one stroke ahead of Jana Samuels. Sue Wheeler was alone in third with a 4-over-par 36.

Penny Williams, Peggy Clauhs and Samuels all had chipins during their rounds.

The men were back on the course June 7 for a nine-hole scramble. The team of Chuck Patrick, Gary Razze and Gary Silke combined on a 7-under-par 25 to earn clubhouse bragging rights for the day.

Tim Sofran walked his way to the winner’s circle after posting the lone 3-0 pool-play record during June 6 action. The June 9 games saw the team of Dom Livedoti and Bob Heiger emerge as outright champs with the only undefeated record in pool play.

Register now for indoor soccer
Calling all soccer kids, ages 3-17, for the youth indoor soccer league at the Center of Anna Maria Island. The deadline to register is June 30, with action starting July 10. Games will be played Tuesday nights, and possibly Wednesdays, too, depending on the numbers after signup is complete.

Cost for the league is $10 for members and $96 for nonmembers. Register online at www.centerami.org or visit the center, 407 Magnolia Ave., Anna Maria.

Anyone interested in sponsoring or coaching a team or for more information about the league, contact Will Schenerlein at will@centerami.org or 941-778-1908, ext. 9205.

One thought on “Adult soccer league finale: Then there were 2”