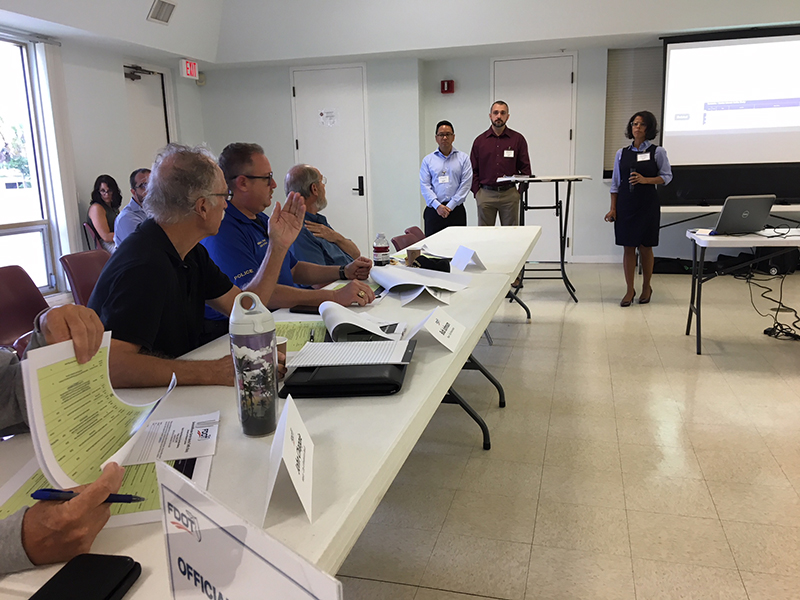 Roundabouts planned in the barrier island traffic study by the Florida Department of Transportation have the hurricane-hardening benefit of eliminating traffic signals.

Police Chief Bill Tokajer questioned a DOT-proposed roundabout in Holmes Beach at the intersection of East Bay and Gulf drives.

“There’s so little traffic there going anywhere but north-south,” he said.

Frank Domingo, DOT consultant project engineer, said if the East Bay-Gulf Drive roundabout is scrapped, the traffic light at the intersection would be the only lighted signal in Holmes Beach — after the other planned roundabouts are built.

Domingo’s point of view swayed Tokajer, who noted the power outage during Hurricane Irma knocked out all traffic lights on the island.

“That is an improvement for that intersection,” said Nathan Kautz, traffic services engineer for District 1.

“It might be beneficial to put a roundabout there to do away with traffic signals,” Tokajer said. “That way we would have no signalized lighting in Holmes Beach at all.”

Other Holmes Beach roundabouts proposed in the study include intersections at Palm/Marina-Key Royale drives, and Marina-Gulf drives.

The BITS goal is to make operational improvements in the short term, develop alternatives to driving to the island and make visitors and residents aware of all travel options, according to the DOT.

All BITS recommendations have been vetted to ensure compatibility with major projects such as the new Anna Maria Island Bridge and work on the Cortez Bridge, according to the DOT.

“What we don’t want to do is put something in that isn’t compatible with a future improvement,” said Domingo.

Two projects were officially added to the DOT list of 72 proposals: an extended westbound right-turn lane from State Road 64/Manatee Avenue onto northbound Gulf Drive/SR 789 and an eastbound thru-lane and median on SR 64 from Gulf Drive to Sixth Avenue in Holmes Beach.

Two proposed shared-parking projects with churches were deleted from the list after church officials rejected the concept as incompatible with their needs.

“We saw that a lot of concerns, issues and options could be grouped into two areas,” said BITS project manager Bessie Reina of the DOT.

The north zone ranges from Anna Maria to the southern tip of Bradenton Beach.

The south zone ranges from Longboat Key to Lido Key.

Short-term projects can be completed within one to three years, according to the DOT. Mid- to long-range projects will take years longer.

“Not everything on the list is going to be done,” Kautz said.

The DOT is seeking to address limited island access, a parking shortfall and traffic jams. Solutions will be prioritized in order of anticipated effectiveness, according to the DOT.

“We want to use options that will give us the most benefit in reaching our goal,” Reina said.

The study begins its third and final phase this fall when an operations plan will be devised showing adopted strategies, plans for implementation and locations of proposed improvements. The study will be completed in spring 2019, Reina said.

“My concern is: Don’t take the slow road from there,” said Holmes Beach Mayor Bob Johnson.

Bradenton Beach Mayor John Chappie said his confidence level was up after the meeting.

“We all want to move forward in a positive way,” he said. “FDOT can only do so much and then the communities are going to have to step up and do their part.”