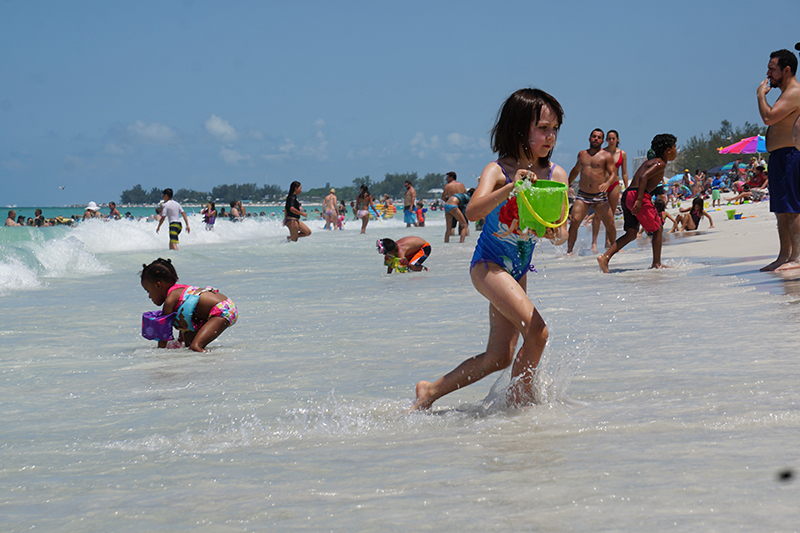 Isidro Valle manages umbrella and chair rentals for the concessionaire at the Manatee Public Beach, 4000 Gulf Drive, Holmes Beach. Valle is bracing for a busy Fourth of July and expects all the available equipment to be rented. Islander Photo: Kathy Prucnell

“Leave the beach the way you found it — only natural — because when you go home, the sea turtles will be coming.”

“It’s simple: have a great time, be safe, follow the rules and clean up after yourself,” Tokajer said June 21.

It’s one of the biggest holidays — if not the biggest — on Anna Maria Island, officials say.

“We want folks to have a great holiday. We want Anna Maria Island to be a family-friendly vacation place,” Tokajer said. “But we will enforce the laws.”

Officials in the cities agree illegal fireworks are problematic on the holiday, and fireworks should be left to the professionals with permits. The Sandbar Restaurant in Anna Maria will host an island fireworks display just after dusk.

“If it explodes, projects or launches, it’s not allowed,” Diaz said. “Sparklers and poppers, like the ones sold in stores, these are OK, but with supervision.”

Tokajer said violators would have fireworks confiscated, and they could be fined or criminally charged.

Diaz, Tokajer and Sgt. Mike Jones, the officer in charge of the Manatee County Sheriff’s Office substation in Anna Maria, said they will bring in extra deputies for patrols.

“People are usually pretty good on the Fourth,” Diaz said.

“I’m hoping that’s the same this year. And leave your dogs at home, where they are safe. There’s always noise problems.”

Traffic woes are likely to be an issue most of the holiday. The Anna Maria Island Privateer’s Fourth of July parade kicks off from Coquina Beach at 10 a.m. and travels almost 7 miles to the Anna Maria City Pier at Pine Avenue and Bay Boulevard.

Roads from the mainland will clog early, so pack patience along with the sunscreen for travel to the island via Manatee Avenue or Cortez Road.

Island officials remind people that grilling on the beaches is prohibited, except in areas where grills are furnished. Visitors will find grills to the south and north of the concession at Manatee Public Beach, as well as Coquina Beach and throughout Bayfront Park in Anna Maria.

At the Manatee Public Beach, Anna Maria Island Beach Cafe manager Tanner Enoch said he is bracing for an onslaught of diners on the holiday.

Isidro Valle will have his hands full with the beach umbrella and chair concession at the Manatee beach, where they offer two chairs and a beach umbrella 10 a.m.-3 p.m. for slightly more than $20. Chairs and umbrellas are cleared from the beach at 5 p.m.

And clearing the beach remains a concern up and down the island with America’s birthday party falling in the middle of turtle nesting season.

Officials urge beach visitors pick up trash from their area before departing. Any holes dug in the sand should be filled in and sandcastles flattened before leaving the beach, and no floats, personal watercraft, chairs, canopies, tents or structures can be left on the sand overnight.

Boaters are reminded not to drink alcoholic beverages while boating. Also, follow no-wake signs and watch for manatees in the Gulf of Mexico and bays.

Have a happy and safe Fourth of July holiday!