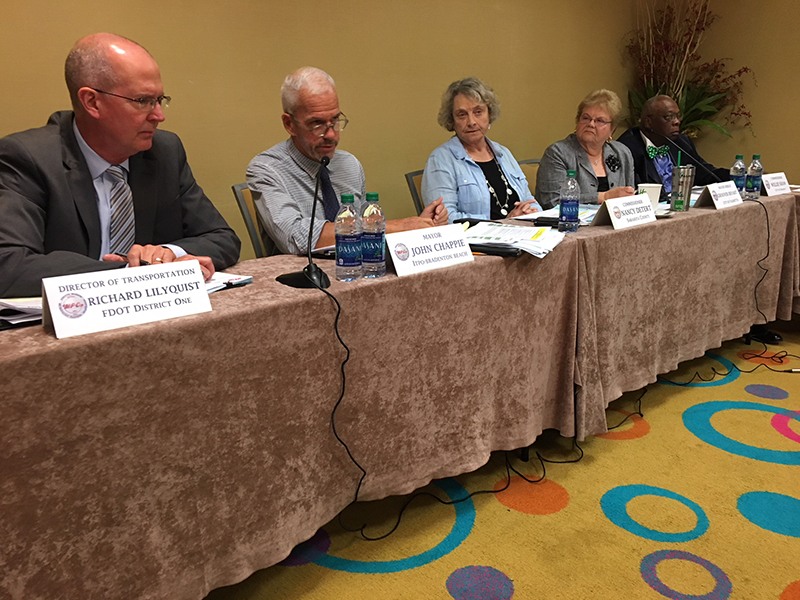 Bradenton Beach Mayor John Chappie remains a dogged defender of the low-rise lifestyle threatened by the Florida Department of Transportation’s proposed megabridge linking his city to Cortez and the mainland.

Chappie wrote to the Florida Department of Transportation decrying its recommendation to build a $72 million, 65-foot vertical-clearance fixed bridge. He said the DOT decision to replace the drawbridge is a “great disappointment for our community.”

“We do not understand the incessant desire by FDOT to replace the Cortez drawbridge with a high fixed-span bridge,” Chappie wrote.

The letter also went to Gov. Rick Scott and the state congressional delegation, among others.

The mayor followed up by questioning DOT officials about its bridge decision at the June 18 Sarasota/Manatee Metropolitan Planning Organization meeting in Bradenton.

DOT District 1 project manager Lawrence Massey and Richard Lilyquist, who stood in for L.K. Nandam, District 1 secretary, did not respond to Chappie or comment on the Cortez Bridge at the MPO meeting.

Chappie attended the MPO meeting on behalf of the Island Transportation Planning Organization as an alternate to Anna Maria Mayor Dan Murphy, another vocal critic of the DOT’s deaf ear when it comes to islanders and Cortezians.

The DOT states a repaired Cortez Bridge would remain too narrow with no shoulders and substandard curbs, be vulnerable to ship impact and storm surge and mean continued delays from bridge openings.

The DOT’s insensitivity toward local views of the megabridge option would have an inevitable chilling effect on the island and its neighboring village, Chappie said.

“Visitors come from all over the world because of what we have,” Chappie wrote the DOT. “Don’t be the ones to destroy what we all treasure and love.”

“It would destroy our community,” Chappie wrote.

In the letter, Chappie also took the DOT to task for holding meetings to collect public input, then ignoring the people who voiced strong opposition to a high-span bridge at those meetings.

“For decades, the city of Bradenton Beach and the village of Cortez have been working to preserve, protect and enhance the character of our communities,” Chappie wrote. “The DOT decision can’t help but significantly damage our communities and that character.”

The DOT has announced a preference to replace the drawbridge rather than repair it. Inspections between 2008 and 2012 found the two-lane Cortez Bridge structurally and functionally obsolete.

No funding is in place to build the high fixed-span, which Nandam has said could take more than a decade to build.

Chappie said there is no dispute Cortez Bridge must be repaired or replaced. But any available option is an improvement on the megabridge.

“The proposed high fixed-span bridge takes us down a path we will not be able to recover from,” he wrote.

During discussion, MPO executive director David Hutchinson reported traffic safety is trending in a positive direction with 43 vehicular and 59 nonmotorized fatalities and 470 serious injuries on Sarasota/Manatee county roads for 2018 through June 18.

“That’s between 25 percent and 30 percent of what was projected to occur,” he said. “So, if everyone continues to stay on track and pay attention while they are driving, we will have fewer of those negative impacts in our transportation system.”

The MPO, which came into being in the 1950s to provide a local voice to state officials on transportation issues, will next meet at 9:30 a.m. Monday, Sept. 24, at the Holiday Inn Sarasota-Airport, 8009 15th St. E., Sarasota.