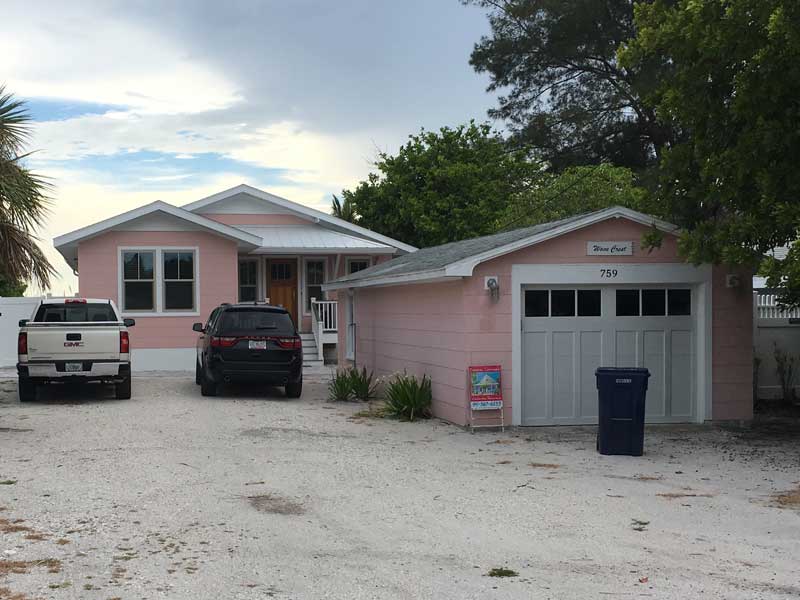 Property at 759 N. Shore Drive, Anna Maria, which became the subject of a homeowner versus contractor dispute, came to the city’s attention for possible FEMA fraud. Islander Photo: Ryan Paice

The city of Anna Maria’s problems took a new turn in the past week.

After firing a building official who apparently failed to complete Federal Emergency Management Agency paperwork, which resulted in a citywide increase to property owners on their flood insurance, the city became aware of a lawsuit that drew attention from the city attorney to possible contractor fraud involving FEMA.

The city also learned a penalty imposed on some builders on lengthy construction projects could be unfair — and plans to make refunds of fines paid.

Meanwhile, the building official hired in January resigned, leaving the mayor to seek a replacement.

At a special meeting July 12, the city commission voted 4-0 for a resolution directing Mayor Dan Murphy to contact FEMA and report information provided by the owner of 759 N. Shore Drive.

Vose said she had learned of a case — homeowners L. Martin and Threse Quinn Hurbi v. Wash Family Construction —being litigated in the 12th Circuit Court and reported it to Murphy and the commission.

The FEMA substantial improvement rule — also known as the 50 percent rule — applies to ground-level homes built before the existence of the Flood Insurance Rate Map in 1975, otherwise known as pre-FIRM buildings. The rule requires any pre-FIRM remodel, renovation or improvement project exceeding 50 percent of the building value to be deemed substantial.

When a project is deemed a substantial improvement, it is required to comply with the National Flood Program, which can result in the elevation of a ground-level structure.

In this case, the Hurbis attorney researched and requested records of 25 past jobs completed by Wash and submitted for the 50 percent remodel or renovation.

Wash allegedly billed the Hurbis for a substantially larger amount than the project permit evaluation.

Obtaining a building permit requires submitting costs for labor and materials, which sets an amount the contractor cannot exceed when billing for the project.

Wash submitted permits for a remodel of 31 percent, which falls under the 35 percent threshold that would require submission of invoices and receipts to verify actual costs.

No action by the city is expected until the court case proceeds or the mayor’s investigation produces more information.