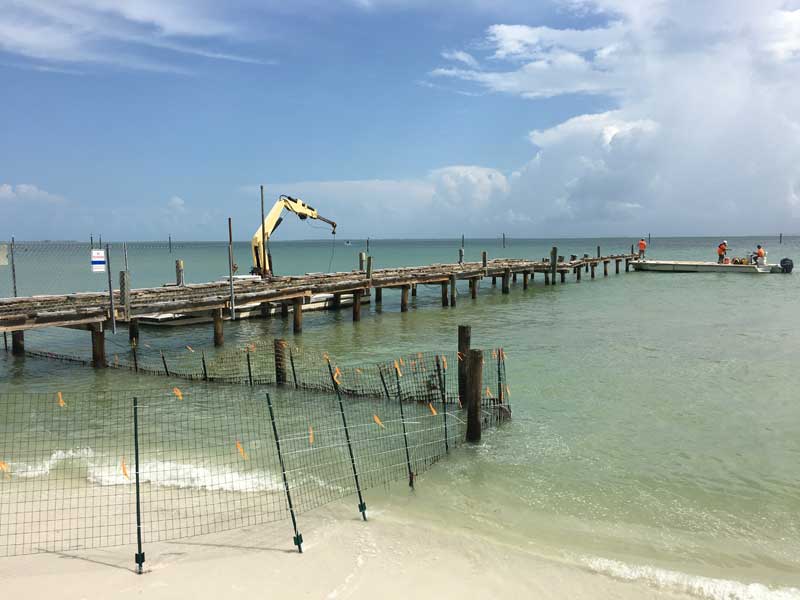 Speeler and Associates workers use a boat and a barge to remove the remainder of the Anna Maria City Pier walkway and pilings July 24. Islander Photo: Ryan Paice 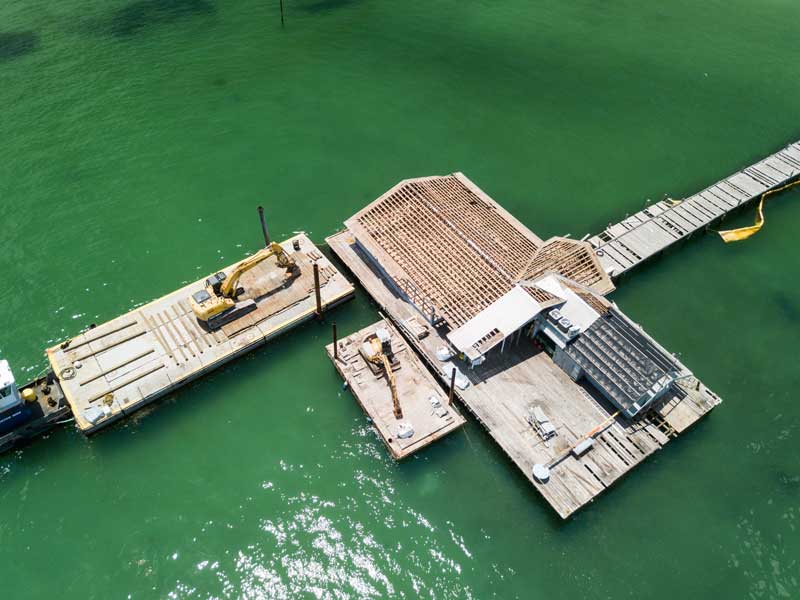 Anna Maria is reaching out to the Federal Emergency Management Agency about alleged fraud by a local contractor on the substantial improvement regulations.

Vose learned of the dispute and brought it to Mayor Dan Murphy and the commission in July.

The commission voted 4-0 July 12, with Commissioner Brian Seymour abstaining, to approve a resolution directing Murphy to contact FEMA and to investigate the Hurbi permit for 759 N. Shore Drive and others.

In the matter of Hurbi v. Wash, Hurbi’s attorney researched 25 jobs that were permitted for improvements under the 50 percent rule by Wash.

Curtis gave information on the alleged FEMA substantial improvement fraud at multiple Anna Maria properties for which Wash allegedly collected fees from property owners based on construction estimates for renovation projects, but submitted lower estimates to the city.

Brown replied July 25 in an email to Curtis, acknowledging the city resolution and stating the “issues described will probably require additional information … and discussion.”

Steve Martin of the Florida Bureau of Mitigation also wrote to Brown and Curtis July 25, saying he and another staff member would be available to meet in Anna Maria Aug. 6-10.

“We fully support the city taking action to deal with this unfortunate situation,” wrote Martin.

By reporting lower construction estimates to the city, the contractor could avoid FEMA’s 50 percent rule to make more improvements to ground-level homes than would otherwise be permitted.

Wash then allegedly billed Hurbi for a substantially larger amount than the project permit evaluation.

Obtaining a building permit requires submitting costs for labor and materials, which sets an amount the contractor cannot exceed on the project.

But Wash submitted permits for a 31 percent remodel, which falls under the 35 percent threshold that would require submission of invoices and receipts to verify actual costs.

When a project is deemed a substantial improvement, it is required to comply with the National Flood Program, which can result in elevation of a ground-level structure.

Vose is awaiting the results of the Hurbi case to guide the city. And city officials hope to get further input from FEMA on the investigation before taking any action.