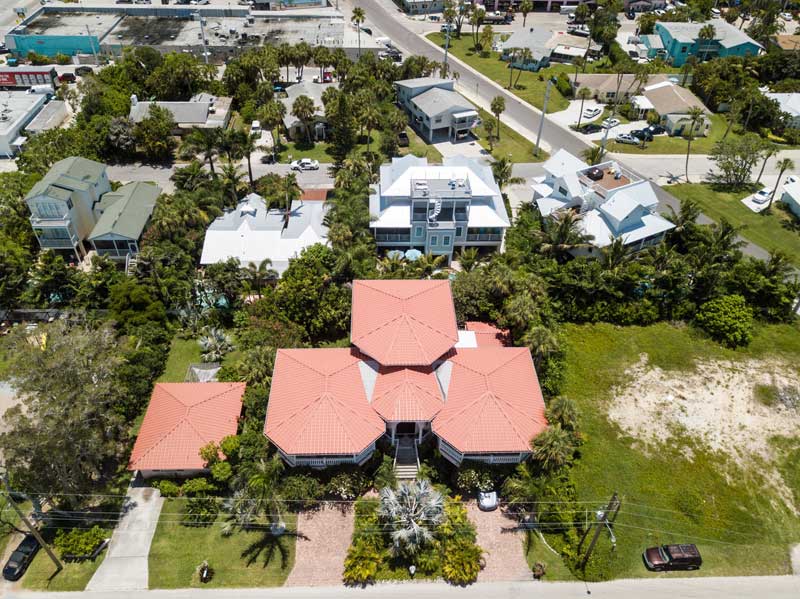 A drone view shows Richard and Marjorie Motzer’s home — in the foreground with the orange roof — and neighboring homes in the 300 block of 56th Street, Holmes Beach, where the Motzers claim the city has been lax in enforcing its noise ordinance. Islander Photo: Jack Elka

An attorney representing the city of Holmes Beach filed a July 3 motion to quash — void or declare invalid — a complaint filed in 12th Circuit Court by attorneys for residents Richard and Marjorie Motzer.

Responding to the Motzers’ complaint, attorney Jim Dye filed a special appearance challenging the way they brought the case forward.

The Motzers filed the suit in June through attor- neys Anthony Manganiello III and Nicole Price of the Icard, Merrill law firm in Sarasota.

The complaint contends Holmes Beach and its police department failed to hold vacationers account- able to the noise ordinance and asks the court to compel the city to do its job and enforce its ordinance.

Dye, of Dye Harrison, a Bradenton law firm, said July 11 the Motzers’ attorneys didn’t file its court papers correctly, citing a civil rule that requires a go-ahead by a judge before filing such a case.

The court may directly rule on Dye’s quash motion or require the Motzers to respond, according to Dye.

“The plaintiffs obtained process and proceeded to have it served on the mayor before the court deter- mined the complaint” stated a proper case, Dye said in the city’s motion.

Manganiello and Price, who filed the Motzers’ complaint, did not respond to July 10 calls for com- ment.

According to the Motzers’ complaint, the couple built their home in the 300 block of 56th Street in 2010 before vacation homes went up that are owned by Jennifer and Shawn Kaleta at 302 55th St. and 5501 Holmes Blvd.

Another suit, in which the Kaletas allege the Motzers “stalked renters” at their properties, was filed in the 12th Circuit in April.

In that suit, a hearing is set before Judge Lon