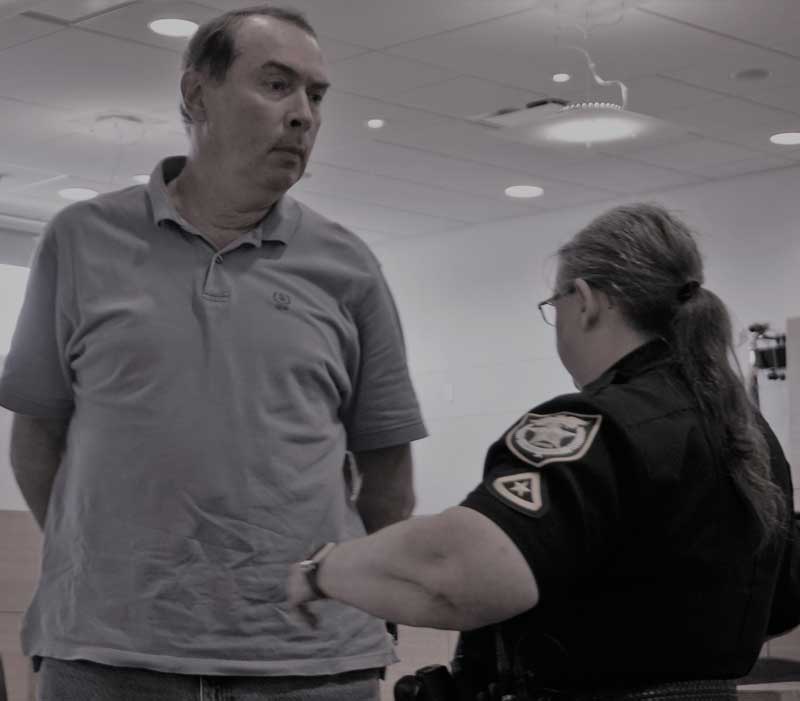 The victims of a video voyeur took the chance to speak.

Ali Flanagan of Sarasota aimed her anger, disgust and distress at Wayne Natt during his July 26 sentencing in a Manatee County courtroom.

Another survivor of Natt’s victimization pleaded with the judge for a harsh sentence.

Natt sat emotionless next to his attorney, avoiding eye contact with others.

And although there was some uncertainty, 12th Circuit Judge Brian Iten accepted Natt’s plea deal, withheld adjudication in three video voyeurism cases and sentenced the man to three years probation.

He also ordered Natt, 56, to serve 11 months and 29 days in the Manatee County jail during the first year of his probation.

Longboat Key police had referred the first of three cases to the 12th Circuit State Attorney in September 2017 after a couple who rented Natt’s Longboat Key condo, at 623 Cedars Court, found hidden recorders in the unit.

Police found microphones and cameras in the ceiling smoke alarms in the master bedroom and living room and, after an investigation of Natt’s computers and storage devices, determined numerous people were recorded without their consent.

The victims were women who dated Natt and short-term renters. Natt had leased the unit through Airbnb from November 2014 to September 2017.

Before the judge meted out the sentence, Natt’s attorney, Peter Aiken of Sarasota, told the court the victims’ images were not placed on the internet.

To that, a woman in the courtroom gallery raised her hand and said, “I beg to differ.”

When Iten offered Natt the opportunity to speak, Aiken declined on behalf of his client, saying Natt already entered his agreement to the probation sentence.

In addition to jail time, Iten ordered Natt to undergo a sex offender evaluation within 60 days and submit to treatment deemed necessary.

The judge also ordered restitution, reserving jurisdiction to determine the amounts, and no contact with victims.

He assessed $200 to LBKPD for investigative costs, $100 to the state attorney’s office for the cost of prosecution, in each of the three cases and $151 for the state’s Rape Crisis Fund for each count, a standard fine in sex-related cases. According to the court website, $4,753 is due from Natt.

The judge agreed to waive payment at Aiken’s request until after Natt’s release from jail, where he was transported after the hearing to begin serving time.

Backstory on sentencing
A blip of uncertainty arose as Iten began to impose Natt’s sentence.

The judge first stated he found Natt “guilty” in one case, but the state and defense attorneys stopped him short, saying adjudication should be withheld.

Iten responded he didn’t see it on the plea form, thanked the attorneys for reminding him and changed his finding to “withhold.”

A “withhold” with a probation sentence spares a defendant from a criminal conviction and typically is offered to first-time offenders to avoid the cost of trial.

Prefacing the sentence, Iten said he was constrained by the state’s scoring system — that Natt scored 13.1 and more than 44 points were required for a state prison sentence.

Natt’s plea to the probation was accepted in June by the prosecutor.

After the hearing, Assistant State Attorney Rick Filkins III, who represented the state in the Natt cases, said the prosecution agreed to the plea because Natt had no prior record.

Even if Natt had been found guilty at trial, Filkins said the maximum jail sentence was a year.

And asked why Natt wasn’t designated as a “sexual offender,” the prosecutor said the “video voyeurism” statute “doesn’t provide for it.”

The survivors speak
Flanagan’s voice started softly but grew louder as she described the turmoil Natt caused her.

She had dated Natt and he had taken her to his Cedar Court home for sex.

She blamed him for causing her trauma — fears, body shame, flashbacks, severe anxiety, migraines and a stroke.

“I thought I was safe in your home,” she said to Natt. “And I wasn’t.… The shame, guilt, vulnerability and violations that you brought to me are immeasurable.”

She condemned Natt for his “calculated manipulation.”

“I was one of 15 identified and there were thousands who weren’t. All of us have to live with it.”

Flanagan and another survivor testified to their disbelief at the one-year jail sentence.

Natt had been given time to get his affairs in order, sell his business and file bankruptcy, Flanagan said, referring to the time after his plea.

“The pure injustice of it all,” she told the court.

Other cases
Natt’s criminal cases represent only some of the litigation against him in 12th Circuit Court.

The city filed the Florida Contraband Forfeiture Act claim based on the criminal voyeurism, privacy and non-consensual recording at the residence, but dropped the suit with a settlement requiring $30,000 from Natt by July 20, which was paid, according to Longboat Key finance director Susan Smith.

The payment, however, is less than the $43,228.35 the city has spent in legal fees and costs to pursue the case.

In another case, Jane and John Doe of Texas filed suit in May against Airbnb and Natt for intrusion of privacy and a loss of their marital relations after staying at Natt’s condo in May 2016.

That case is in discovery.

Airbnb filed a motion July 25 objecting to discovery and seeking to postpone litigation. In the court paper, the online short-term rental company signaled its intent to invoke the arbitration clause under its terms of service.

No hearing date is set in the tort case.