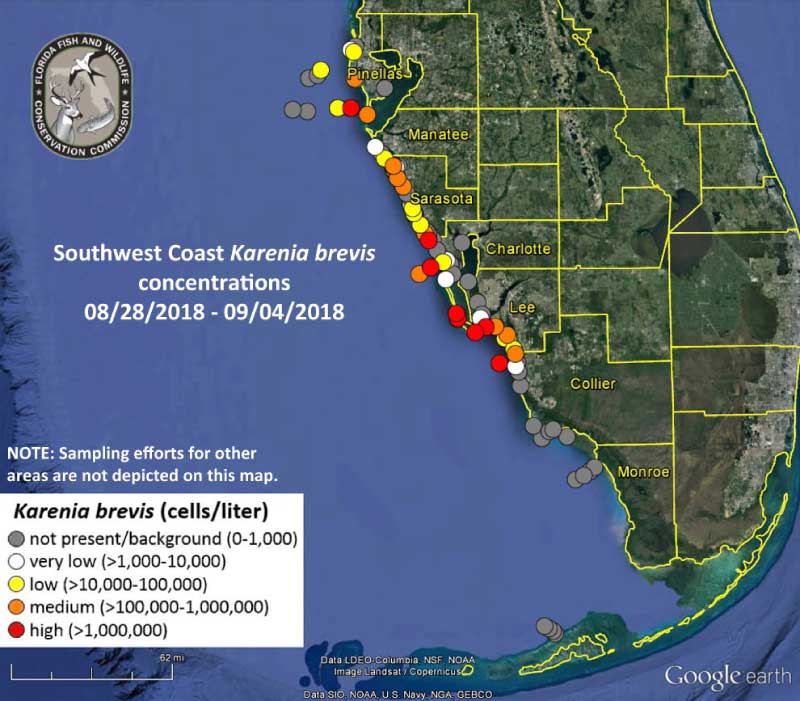 Easterly winds and Tropical Storm Gordon chugging northward in the Gulf of Mexico may have helped lessen the impact of a harmful algal bloom in the waters surrounding Anna Maria Island in September.

Many islanders had their hopes up, buoyed by fresh air and turquoise waters. Beach chairs and umbrellas returned to the shoreline and reports of fish kills fell off.

The midweek report Sept. 5, compiled by the Florida Fish and Wildlife Conservation Commission, showed the red tide bloom decreased slightly in size, down to 120 miles in length from 145 miles on the southwest Florida coastline.

High concentrations were offshore in southern counties and Hillsborough, but the concentration of red tide dropped Sept. 5 offshore of Manatee and Sarasota counties.

Very low concentrations on the Manatee coast — less than 1,000-10,000 Karenia brevis cells per liter of water — appeared on the map for the first time since red tide arrived in island waters just after Aug. 1.

But numbers released by the FWC Sept. 7 showed a slight reversal in the clearing trend, with the toxin climbing 5-25 percent higher than mid-week readings. The highest concentration remained about 5 miles offshore.

Some preceding weeks had readings exceeding 1,000,000 parts per liter, resulting in massive fish and wildlife kills and respiratory issues for some people.

The damage from red tide continued to take a toll on Florida wildlife. The FWC reported 127 manatee dead from red tide through Aug. 31. Many have been necropsied and others were awaiting examinations.

Forty-one dolphins died in August in the five-county Southwest Florida HAB area. The 10 carcasses examined as of Aug. 26 all showed high levels of red tide toxin.

SBA representatives will provide information on disaster loans, as well as answer questions and assist with SBA applications.

Manatee County’s Economic Development team and chamber of commerce partners also will be on hand to assist people.

Meanwhile, Amanda Horne of the Anna Maria Oyster Bar had AMOB staff distributing cards and posters with information on resources available to businesses. Also, resources can be found by dialing 211, a free county helpline.

But could the reprieve be short-lived?

The current HAB is in its 11th month, and, though weakening, still has the potential to regroup, according to scientists, such as Robert Weisberg with the University of South Florida, who said at the end of August, significant amounts of red tide remain close by.