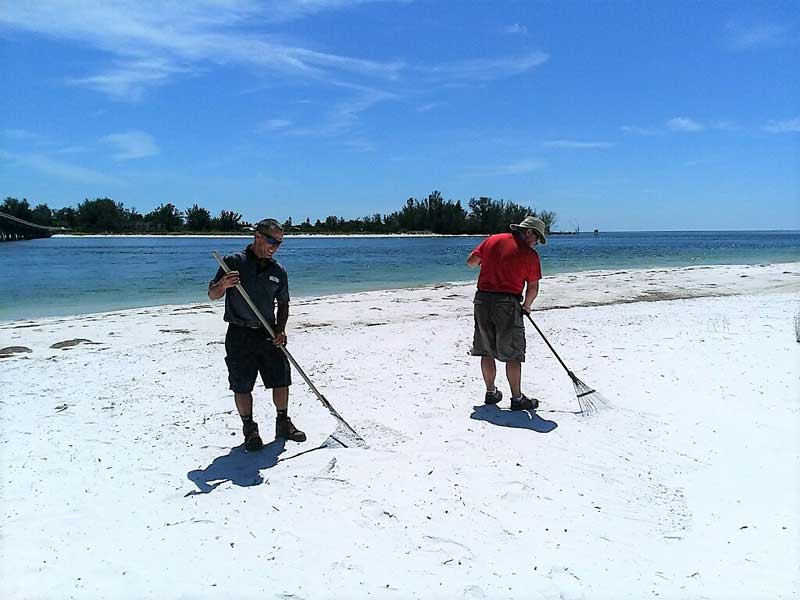 Peter Vrinos, left, and Mike Buttke, right, rake Coquina Beach Sept. 12 near Longboat Pass. Crews were hand-raking areas that were inaccessible by tractor to clear dead fish from Bean Point on the north end to the southern tip of the island. Islander Photo: Courtesy Manatee County

Like the colored balls that mark the density on the Florida Fish and Wildlife Conservation Commission maps, the red tide bloom continues to bounce on and off the coasts along southwest Florida.

In a beach hazard report, first issued by the National Weather Service in Tampa Sept. 11 and then renewed Sept. 13, the NWS warned that the human effects of the hazardous algal bloom had stretched inland from the Manatee County coast.

The impacted area extended east past Interstate-75 and Myakka City, with coverage over downtown Bradenton and northward past State Road 62. NWS said a hazard warning was in effect until Sept. 17, including possible respiratory irritation, coughing, difficulty breathing and watery eyes for some people.

The HAB also appeared for the first time in the Florida Panhandle the week of Sept. 17.

Concentrations of red tide climbed back to high levels — greater than 1,000,000 Karenia brevis cells per liter — but Manatee County did show a slight decrease in the samplings with high readings, according to the FWC weekly red tide statistics.

Aerial surveys, as well as water samples taken by FWC, indicate the red tide bloom extended 10 miles or more offshore in some areas. For the first time in months, levels of red tide fell to background status along the coast of Collier County. Collier has been plagued with the red tide bloom for 11 months.

Manatee County parks crews were ready, though one of two tractors used to rake the beach and scoop up dead fish was being repaired.

“We are ready and we will work all weekend,” Carmine DeMilio, manager of the county parks and grounds operations, said Sept. 14 of the raking operations. “Those beneficial east winds have disappeared, and we are getting a push, especially of seaweed.”

Work the weekend they did, responding to calls from residents in Anna Maria of dead fish along the north end beach near the Rod & Reel Pier.

“It’s not bad out on the end of the pier,” Daphne Ryerson, of the Rod & Reel, reported Sept. 15. “But they are washing up on the sand again and stinking. One day (the beach) is fine, the next day, we have dead fish again.”

Crews continued daily through the week to collect fish in hard-to-reach areas around the bay.

DeMilio said the work would continue as long as necessary.

Meanwhile, scientists struggled with red tide and its effects on marine life. Researchers from Florida Gulf Coast University fear a dead zone is being created in the Southwest Gulf of Mexico — not unlike the dead zone where the Mississippi River flows into the Gulf. The northern Gulf zone is among the largest two dead zones on Earth.

Dead zones occur when oxygen levels in the water are too low to support most marine life. In essence, the food chain has failed.

Decomposition from tons of rotting sea life on the Gulf floor is contributing to the dead zone. For all the waste collected and disposed of in landfills by coastal counties — Manatee County has cleaned up more than 250 tons since red tide struck the area in early August — more has sunk to the bottom.

“The algae die, the fish die and the process of decomposition takes up a lot of oxygen,” FGCU researcher Bob Wasno said.

Researchers recently took a three-hour dive in the Gulf and found everything from sand dollars to sea urchins and coral dead offshore.

In the island communities, the impact is spotty. Most places up and down the beaches and on the bayfront reported little to no dead fish and no smell, no irritation to people on land.

The state of Florida earmarked millions of dollars for red tide relief and research, as the HAB continued its stranglehold on businesses.

Workers and residents wished for favorable winds from the east to return, pushing the HAB farther into the Gulf of Mexico. A retreat of red tide would furnish the opportunity for coastal businesses to reclaim revenues and lure tourists back to the area.

For now, scientists continue trying to unravel the puzzle of red tide, while islanders read daily beach reports and wait for red tide to disburse or exit the coastline.