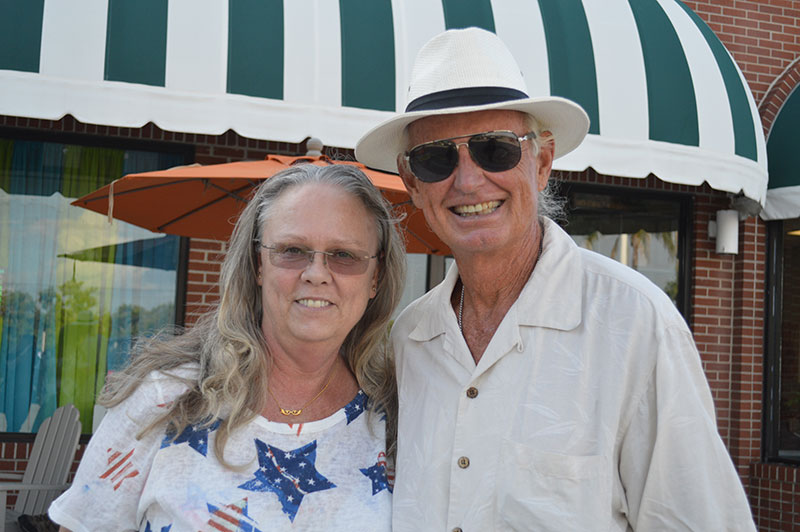 The Islander gave local candidates the opportunity to speak on their platforms and meet voters Oct. 3 at Popcorn and Politics at the newspaper office, 3218 E. Bay Drive, Holmes Beach.

Two of the four candidates running for two seats on the Bradenton Beach city commission spoke at the event.

Tjet Martin and John Metz, former volunteer board members, addressed issues in the city and how they would provide remedies.

Incumbent Commissioners Ralph Cole and Marilyn Maro, who also are running on the Nov. 6 ballot, did not attend.

“I think there needs to be a stronger voice for the residents and I think I’m it,” she said.

She said some city projects have been funded and started, but not finished.

Martin said she served on several boards in the city, starting shortly after she became a full-time resident 15 years ago.

Her volunteer work included serving on the charter review and comprehensive plan ad hoc committees, and chairing the Scenic Waves Partnership Committee, an advisory group with a mission to ensure a safe and beautiful environment for residents and visitors to Bradenton Beach.

Additionally, she went to Tallahassee to petition the state to add Bradenton Beach to the Waterfronts Florida Program, which provides resources to help local governments in coastal Florida revitalize their waterfronts.

Martin said the city’s waterfront was the first in the state to be designated in its entirety.

Martin passed the microphone to Metz, who addressed the crowd of about 70 people.

Metz, who moved to the city five years ago, said Bradenton Beach is steadily parting with its history as “a nice residential beach town.”

He said non-resident investors and merchants have taken over to turn it “into some kind of a transient resort.”

Metz said he served on the planning and zoning board for more than three years and was active in the neighborhood groups Concerned Neighbors of Bradenton Beach in 2017 and Keep Our Residential Neighborhoods in 2018.

CNOBB proposed three charter amendments, which were approved by voters and enacted.

KORN has prepared four charter initiatives this year, but the city commission halted them. KORN sued the city and the matter was heard in civil court and awaits the judge’s final ruling. If the judge rules in KORN’s favor, the ballot questions will be decided in a special election.

Metz said, if elected, he would ensure only residents are appointed to city boards, adding that non-resident city business owners are on the CRA and P&Z boards.

“Why are non-residents having a say in the policy in the city?” Metz asked. “They should not.”

Additionally, he said he would vote against tax raises and exempt residents from transient rental regulations.

“They’re not the ones that cause the problems,” Metz said.

He added that too many CRA-funded projects support merchants on Bridge Street, not residents in the district.

“I’m for residents first and that’s the way I will approach this job,” Metz said.

Mail and absentee ballots went out the week of Oct. 3.