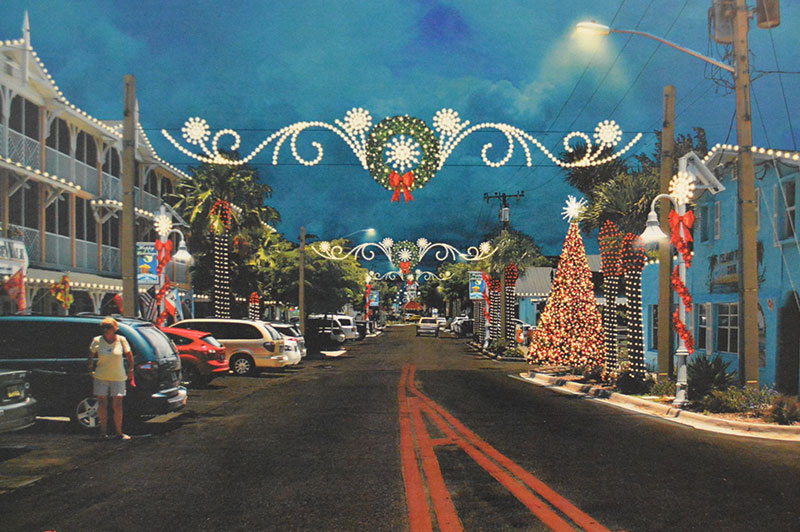 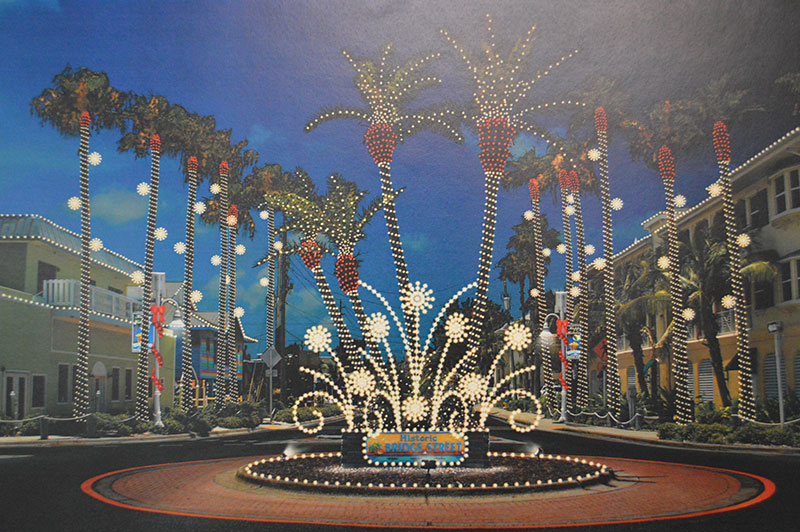 The roundabout at Bridge Street and Gulf Drive in Bradenton Beach will be aglow for the holiday season in a rendering of the newly approved spending for decorations.

Bradenton Beach might never have a white Christmas, but it looks like 2018 could be a bright Christmas.

He said the merchants invested $20,000 for holiday decorations, and asked the CRA to contribute $26,000 to hire Christmas Designers FL of Pompano Beach to complete their design plans.

Storage, insurance and handling would add $4,400 per year to the cost.

He said the contract would include the purchase of three skyline lights across Bridge Street with supporting poles, a custom banner and “snowburst” lights on the pier and clocktower.

The decorations would be installed before Thanksgiving and remain through the New Year celebration.

“I think the idea of lighting up the city for the holidays is just fabulous,” Ed Chiles, restaurateur and CRA member, said. “I’m for it.”

Mayor and CRA member John Chappie confirmed with the city attorney that CRA funds could be used for decorations.

The CRA district, bordered by Cortez Road, Sarasota Bay, Fifth Street South and the Gulf of Mexico, was deemed blighted in 1992, allowing for incremental tax revenue from Manatee County coffers to promote restoration and growth, including tourism.

CRA funds are intended for enhancements for the district, and are separate from the city budget.

“I just want to make sure people understand that the funds must be spent in the district,” Commissioner Ralph Cole, CRA chair, said, adding that is why the CRA board cannot fund lighting outside the district. However, Church Avenue could be an option for expansion of the holiday decor.

Chappie said the project requires a budget amendment and contract.

Cole asked if the project must be put up for bids.

But city attorney Ricinda Perry said that if the CRA enters a partnership with the merchants group, which already has a contractor, an RFP would not be required but an agreement between the CRA and the merchants would be necessary.

She added that Spooner — a member of the BSM — would be required to produce quotes from two more companies, unless Christmas Designers is the only company providing such a service, according to the CRA procurement policy.

A motion for a partnership with the BSM to decorate Bridge Street at a cost not to exceed $32,000, contingent upon three quotes, passed 5-0, with members John Horne and Commissioner Randy White absent with excuse.

“I think its fabulous that the CRA is going to help complete this project,” Bartizal said Oct. 19. “When we started on this years ago, we thought we’d never get done. And here we are.”

Spooner will present his findings on the holiday decorations at the Bradenton Beach CRA meeting at 9:30 a.m. Wednesday, Nov. 7, at city hall, 107 Gulf Drive N.