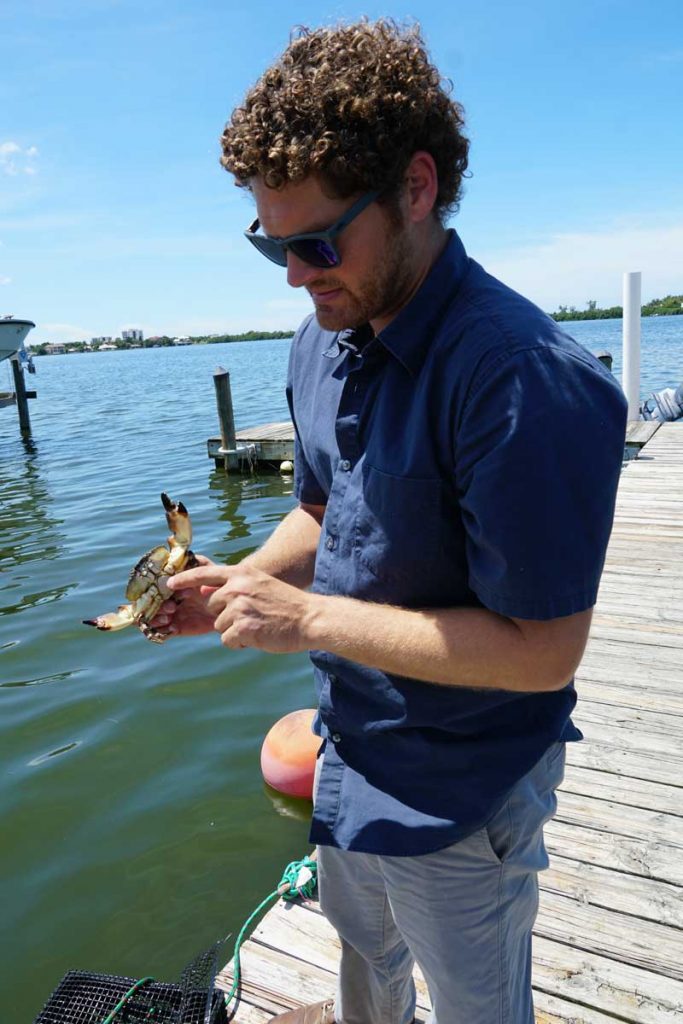 Mote Marine Laboratory researcher Phil Gravinese checks on a female stone crab in Sarasota Bay Aug. 28 as part of an experiment looking at the impact of red tides on the marine life. 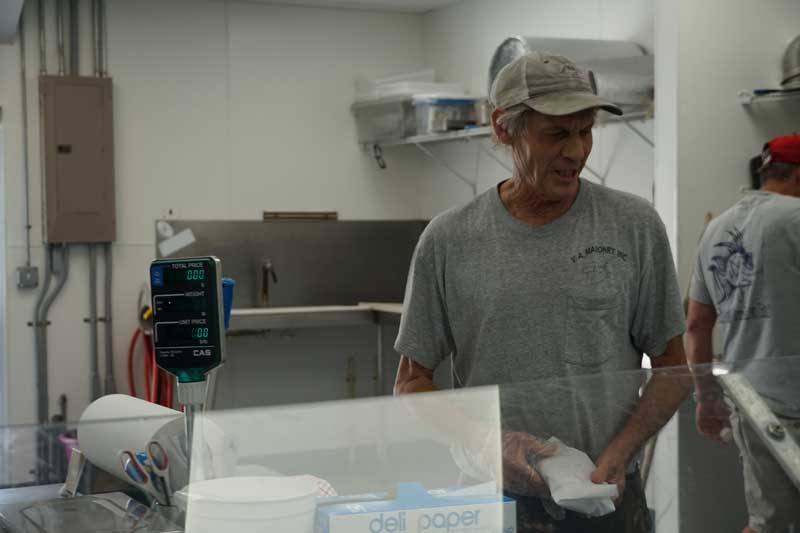 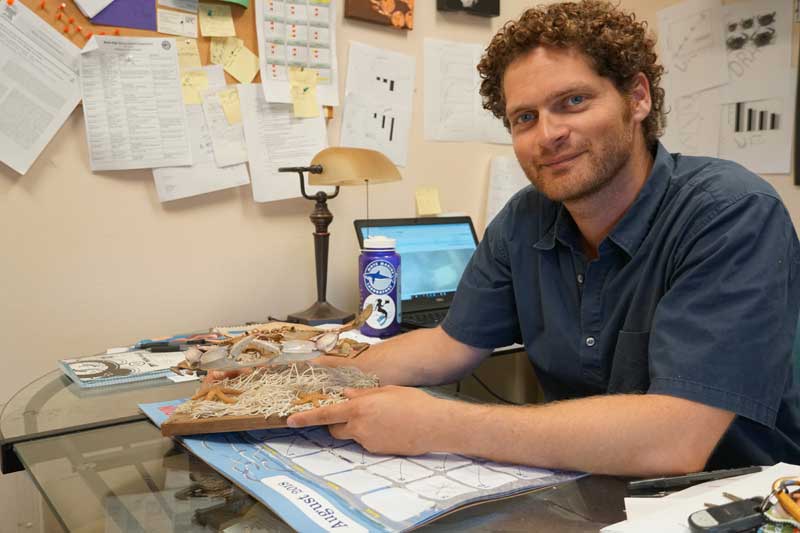 Another stone crab season — Oct. 15-May 15 — and crabbers are optimistic.

This year crabbers and researchers wonder how the yearlong red tide could impact the harvest.

Cortez crabbers Wayde Campbell and son Jimmy hope for the best, but fear another slow season.

Wayde Campbell began crabbing after the 1995 statewide net ban like other commercial fishers forced to switch their focus or leave the industry.

Still they’ve invested in this season and will crab with 5,000 traps 8-15 miles offshore, from Englewood to Clearwater.

Preseason, the Campbells readied 1,000 traps to replace old ones, adding 4 inches of concrete and rigging ropes and buoys at a cost of $25 per trap. The plastic crates were tagged with their Florida Fish and Wildlife Conservation Commission license, which costs an annual renewal fee of 50 cents per trap.

Wayde Campbell built a new boat for the season, Captain Jim, and expects to spend some $20,000 for bait and gas “to throw them in the water,” he said, referring to the traps.

“I was hoping this year they’d waive the (license) fees because I heard they did a test off Boca Grande,” Wayde Campbell said.

“From the red tide,” added Jimmy.

They both said Cortez crabbers haven’t seen a good season in five years.

Ryan Gandy at the Fish and Wildlife Research Institute, the research arm of the FWC, described the Pine Island-Boca Grande-Sanibel Island study that started in August.

“After the red tide intensified in Southwest Florida, FWC began working with commercial stone crab fishermen out of Pine Island to set lines of 20 traps offshore to gauge the impact of red tide on the stone crab population,” he said in a Sept. 19 email.

FWC placed four sets of five traps in varying depths in mid-August and will continue collecting data north of Sanibel Island through October, according to Gandy.

About the study, Gandy said, while there have been stone crabs caught, it’s been “a very low catch … much lower than what fishers expected.”

Scientists will compare the red tide impacts found in the Pine Island location to other catches in locations with no exposure to red tide.

The state’s most recent outbreak of high concentrations of Karenia brevis began in October 2017 in the northern Collier and Lee counties and, in August, hit Manatee County, killing tons of fish and marine animals as the tide stretched north.

As of Sept. 19, FWC reported the red tide organism persisted on about 135 miles of coastline, from northern Collier to Pinellas County, extending offshore 10 miles. It was reported in Bay County as well.

The FWC’s new red tide study is in addition to a preseason database from eight test sites that has been growing since 2012.

Annual preseason data — published by the FWC — comes from 20 traps sampled at the eight locations, which includes a line of traps in Anna Maria.

That data will be available the first week in October at http://myfwc.com/research/saltwater/crustaceans/stone-crabs/catch-data/.

Results from the red tide Pine Island study, Gandy said, will be published when the FWC obtains meaningful data.

Gandy is working on the study with Mote Marine Laboratory researcher Phil Gravinese, who is researching the impact of red tide on stone crabs inshore.

Gravinese knows stone crabs, with three published reports on the species in the past two years.

In studies in 2017-18, he concluded red tide is killing sublegal Florida stone crabs and the mortality of stone crab larvae is increasing due to rising seawater temperatures, elevated levels of carbon dioxide and ocean acidification.

One study is examining the change in stone crab larvae swimming behavior to determine the effect of high and medium concentrations of K. brevis.

Asked for a preview of the larvae study, Gravinese said, “There seems to be a dose response. The higher dose of Karenia brevis, the higher mortality.

“There also appears to be changes in their swimming behavior. They swim slower. Also, they appear to be moving in the opposite direction than expected,” he said, possibly related to the K brevis neurotoxic effect or the larvae’s attempt to avoid the red tide.

A second study — with morning and late afternoon data collection off docks — began when red tide came to Mote’s backyard.

“Once it happened, we got out our baskets,” Gravinese said of the red tide at Mote. He started the experiment since it was “super easy to do at the docks at the moment.”

After the crabs die, they are tested to determine if the red tide is “in the muscle, the viscera — the gut tract — or something else.”

Another Mote study directed by Gravinese is examining two groups of stone crabs: 10-12 in sea water with red tide, eating clams that absorbed the K brevis toxin, compared with 10-12 in a tank of clean water with a healthy clam diet.

The study looks to determine if red tide causes stone crabs to die because of the food they consume, direct exposure to the brevetoxin or from oxygen depletion in the water column.

Each of Gravinese’s studies is pending lab results to determine the nature and effects of the toxin.