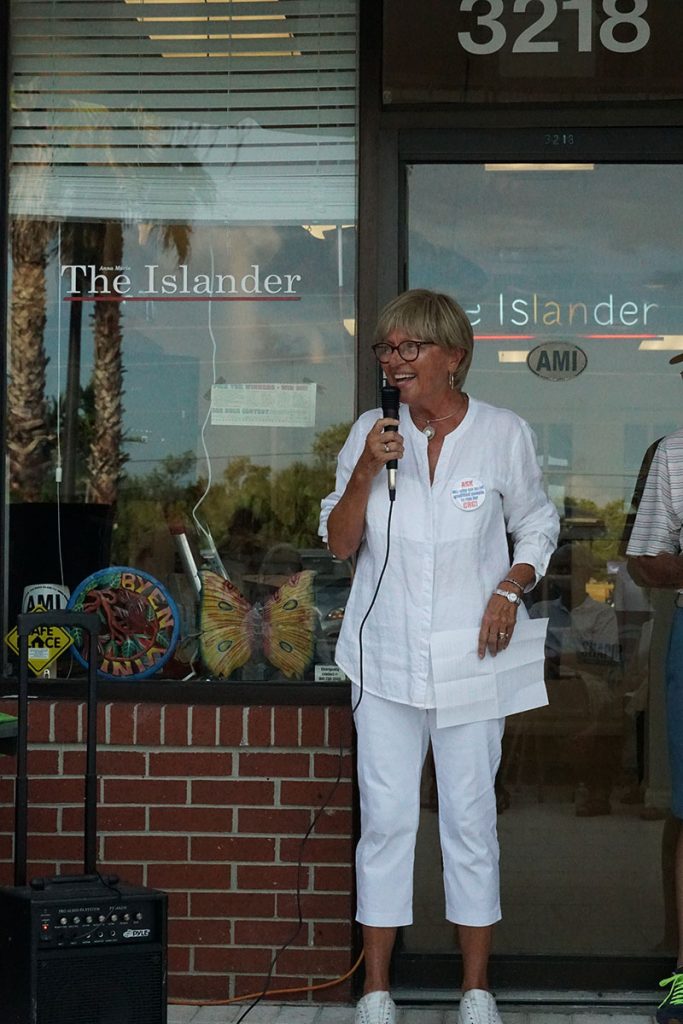 Nancy Deal spends her turn at the microphone Oct. 3 at The Islander Popcorn and Politics event discussing her candidacy for the Holmes Beach charter review commission. Islander Photo: Kathy Prucnell 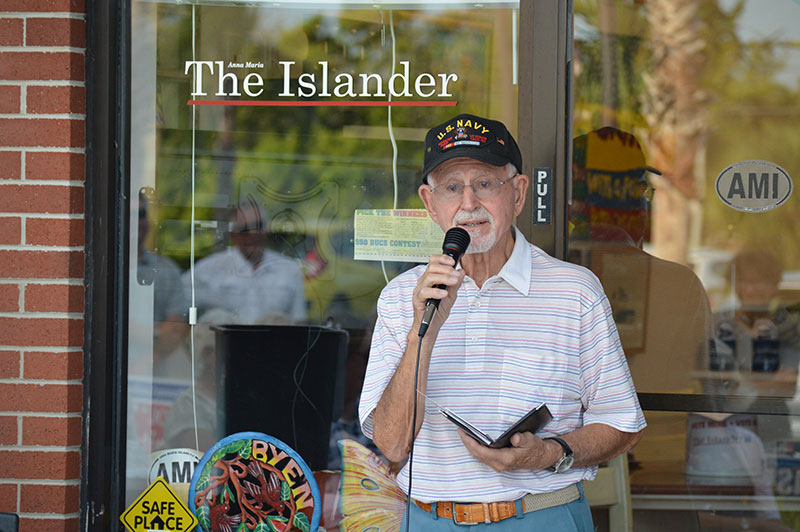 The future of Holmes Beach was the focus of the city’s charter review candidates at The Islander’s Popcorn and Politics forum Oct. 3.

Candidates David Zaccagnino and Ben Rigney, who was on vacation, did not attend.

Several people spoke about the city’s growth in recent years, and how the charter might change to better guide the city.

Implementing a city manager form of government was mentioned frequently, with multiple candidates giving their take on the issue as a focus of the charter review.

The race will be decided Nov. 6.

Charter commissioners are not paid and the board will dissolve once the review process is completed.

Early voting will begin Oct. 24 at select locations in the county.

A look at the candidates:

He moved to Tampa in 1983 and often vacationed on Anna Maria Island. He made the move to Holmes Beach in 2014.

He is the co-owner of Vibe Engineering, a St. Petersburg-based transportation engineering consulting firm.

Calhoun wants to bring his professional background and also his experience on the ad hoc Holmes Beach Form of Government Committee to the charter review commission. The ad hoc committee recommended Holmes Beach change to a city manager form of government.

“I think the city has grown large enough by now that the efficiency of the government is really important,” Calhoun said in an interview Sept. 28. “That’s probably the biggest issue for me.”

Calhoun received $50 in contributions for his campaign, and spent $6 as of Sept. 28, according to a Manatee County Supervisor of Elections report.

Claudia Carlson, 67, was born and raised in Washington state. She moved to Holmes Beach six years ago.

She said at Popcorn and Politics she wants to bring her record of reliability, strong work ethic and commitment to the charter commission.

“I am particularly interested in helping establish practices of governance that improve city efficiency and effectiveness and address problems we are facing with population growth and environmental stressors,” Carlson wrote in an email Sept. 28.

Carlson received $50 in contributions for her campaign, and spent $6 as of Sept. 28, according to an SOE report.

She moved to Holmes Beach in 2000 after frequent visits since 1974 — she and her husband’s parents retired to the island.

Deal, now retired, taught in elementary and middle schools, as well as at the college level and for the U.S. Army.

She was a member of the Holmes Beach Form of Government Committee and wants to consider looking into the length of terms for elected officials, requirements for running for office, as well as commissioner attendance requirements.

Deal received $50 in contributions for her campaign as of Sept. 28, according to an SOE report.

Major Leckie, 87, was born in Michigan and moved to Holmes Beach 15 years ago.

Now retired, Leckie’s career was as the head of a hospital purchasing department.

Leckie said Sept. 27, “I want to go through the whole constitution and bring it up to date. We’re in a process of change throughout Florida, whether it’s in Tallahassee or Holmes Beach. Things have changed, and we have to keep up to date.”

He said he has no specific issues he plans to address as a member of the charter review commission, but will wait for issues to surface when discussion begins.

Leckie reported $85 in contributions to his campaign as of Sept. 28, according to an SOE report.

Sean Murphy, 66, a native of Halifax in the Canadian province of Nova Scotia, holds a law degree from Dalhousie University law school.

Murphy moved to Holmes Beach in 1982 and became a U.S. citizen in 1991, which he said was one of the most important moments of his life.

He’s owned the Beach Bistro in Holmes Beach for 32 years and has served as a member of the Holmes Beach Police Department pension board for 15 years. He also owns Eat Here and The Doctor’s Office, both in Holmes Beach.

Murphy said he wants to bring his business and political experience to the charter review commission.

He said he’s read the charter, but would reserve judgment on any changes until after the review begins.

Murphy said other candidates insist on the need to employ a city manager, but he isn’t sure whether the position would be a positive move for the city.

He also would like the charter to include a bill of rights for residents.

Rigney owned Rigney Plumbing and worked as a fire marshal before retiring in 2014.

He said Sept. 27 he wants to become more involved in the community and will go into the charter review with an open mind.

“I want to wait until I see all the issues up-front,” Rigney said. “I don’t want to prejudge anything right now, I want to go in with an open mind.

Edward Upshaw, 66, was born in Lakeland and moved from his hometown to Holmes Beach in 1999.

Upshaw worked as an engineer for Tropicana before recently retiring. He said Sept. 27 he is training to become a master gardener.

“I have seen great deal of change since I’ve been here for the past 20 years and most of it is accelerating in the past five or six years,” Upshaw said.

He added, “I think we have to realize that the town and island are changed, and will continue to change. We need to look forward to how we can control that change and live with it.

“We can’t stop it, we have to anticipate it and shape the way it goes.”

Upshaw said he would advocate for changing the form of government to hire a professional city manager and possibly pursue addressing term limits for the elected officials.

Upshaw received $50 in contributions to his campaign and spent $6 as of Sept. 28, according to an SOE report.

David Zaccagnino, 48, was born in New York, lived in Los Angeles for eight years and moved to Tampa at the age of 9.

He has worked as a financial adviser for 18 years and before that worked as a chemist for the Department of Environmental Protection.

After settling in Holmes Beach 18 years ago, Zaccagnino became involved in civic affairs. He served as commissioner for nine years and commission chair for two of those years.

He currently serves as chair of the board of directors for the Center of Anna Maria Island.

Zaccagnino said he is running for the charter review commission to keep the charter from changing or expanding — changes to the charter by the last committee were beneficial but, he said, no further changes are necessary.

He said Holmes Beach would benefit from hiring an administrator as opposed to a city manager, which he claimed would slow government down.

Zaccagnino received $100 in contributions to his campaign as of Sept. 28, according to an SOE report..