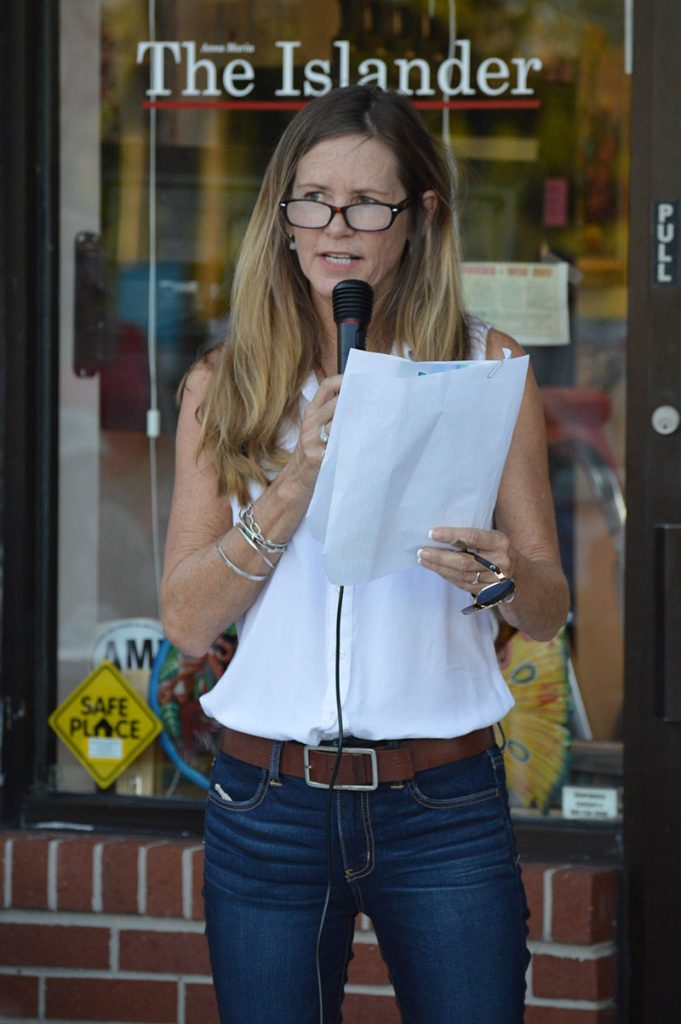 Holmes Beach mayoral candidate Judy Titsworth outlines her platform at the Oct. 3 Popcorn and Politics event at The Islander.

Joshua Linney stepped to the microphone for his turn to speak Oct. 3 at The Islander’s Popcorn and Politics.

Advised twice that the order of speakers was alphabetical, Linney thanked The Islander and began with a double-edge sword.

“On Nov. 6, I hope you will elect me as the next mayor of Holmes Beach because you deserve someone who’s going to serve you and not themselves,” Linney said.

He referred to his community activism, including a seat on the Palma Sola Scenic Highway Committee and the Holmes Beach Parks and Beautification Committee “until recently.”

Current Holmes Beach mayor, Bob Johnson, failed to recommend Linney to serve another term on the volunteer beautification board at the Sept. 25 commission meeting, despite Linney’s expressed interest and open spots on the committee.

During her time with the microphone, mayoral candidate Judy Titsworth, 55, city commission chair, struck back at Linney, pointing to his inexperience and “questionable background.”

She said she had not expected opposition and warned the crowd at Popcorn and Politics that those who favor the city manager movement “were responsible” for Linney’s candidacy.

Linney outlined his background, saying he was “born to a mother who couldn’t have children,” joined the U.S. Army on his 18th birthday and was medically discharged. He began a career in information technology and volunteered for veteran causes and disaster relief after graduating from the University of Central Florida, he said.

“Our city is at a critical juncture,” Linney added, advocating for professional management and a community investment tenant center to restore balance for a dwindling residential population, mitigate Bert Harris litigation, address sign pollution, clean up Spring Lake and “stop developers from raping our beaches.”

Titsworth previously voiced opposition to the manager concept, but told the Popcorn and Politics audience if the charter review committee — to be elected by Holmes Beach voters Nov. 6 — recommends the government change after looking at the charter “in its entirety” and the voters approve it, “it would be my honor to assist in the transition.”

Titsworth touted her leadership as a three-term commissioner, including five years as commission chair, as well as her lifelong residency. She is a third-generation relative of the namesake of Holmes Beach, Jack Holmes Sr.

The race is nonpartisan.