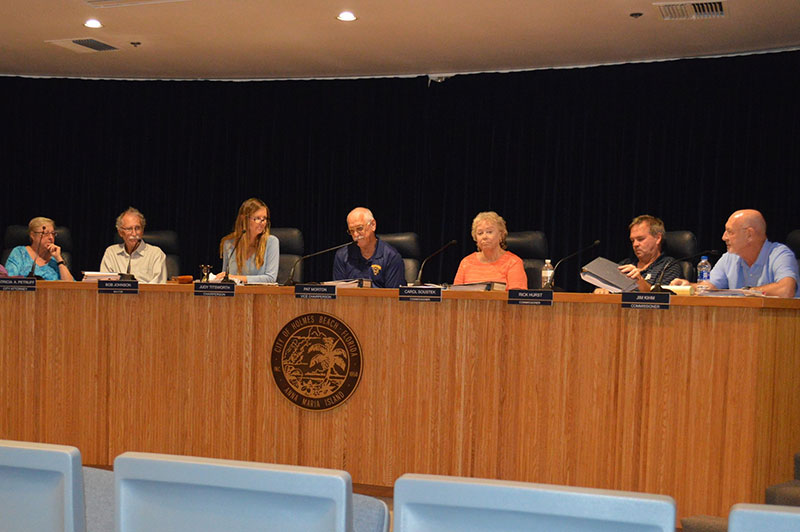 Holmes Beach is tidying up its vacation rental certificate program.

“In the last two years we’ve realized that there’s a lot of violations that are coming up that we really did not have meat in the present ordinance to take care of,” Holmes Beach Police Chief Bill Tokajer told commissioners Oct. 23 during a work session to discuss the vacation rental ordinance.

A first reading of the amended ordinance was unanimously approved at the regular meeting that followed the work session.

During the discussion, Commissioner Rick Hurst said he was concerned that the proposed fee schedule — $150 for a first violation, $300 for the second, daily fines and a special magistrate hearing for a third violation and the suggested $2,500 irreversible violation — should be more stringent.

Hurst said some violations are more egregious than others and should carry a stricter penalty. He said, for example, someone advertising without a rental certificate should receive a bigger fine than someone who fails to register a new agent.

“There’s a few here that I’m looking at that say, ‘You know you’re violating, you’re just waiting to get caught,’” Hurst said, and asked the commission to consider higher fines for certain violations.

Tokajer said the process is not about punishment, but about compliance.

Commissioner Carol Soustek agreed with Tokajer, saying the goal is safety for renters.

Commission Chair Judy Holmes Titsworth recommended increasing the daily fine imposed by the special magistrate, so that if someone provides misleading advertising and gets caught, they can be fined for every day the ad was published.

“And it should happen before the third violation,” she added. “Because the only way we’re going to catch these people is through the advertising.”

City attorney Patricia Petruff said that since the goal of code enforcement is compliance, the violator must be given enough time to fix the violation. She said since the violations regarding false advertising are the biggest concern, they could be addressed with a harsher penalty, but they still need time to come into compliance.

Tokajer suggested that advertising without a valid rental certificate, or with misleading information that fails to meet requirements for proper length of stay or exceeds the occupancy limit, could incur an immediate fine and, if not remedied within five days, would be sent to a hearing before the special magistrate.

Petruff warned that the special magistrate and alternate aren’t always available. She recommended most violations be handled with citations.

The commission reached consensus on a $250 fine for the first violation and $500 for a second violation, with certain violations incurring higher fees and a special magistrate hearing, if not corrected within 48 hours of the second notice of violation.

Additionally, the commission agreed the prepared notice for all vacation rental units would include the quiet hours — 10 p.m.-7 a.m. — and also include the notice that “excessive and boisterous noise are not permitted at any time.”

The final public hearing and vote for the ordinance will be at the next city commission meeting at 6 p.m. Tuesday, Nov. 13, at city hall, 5801 Marina Drive.