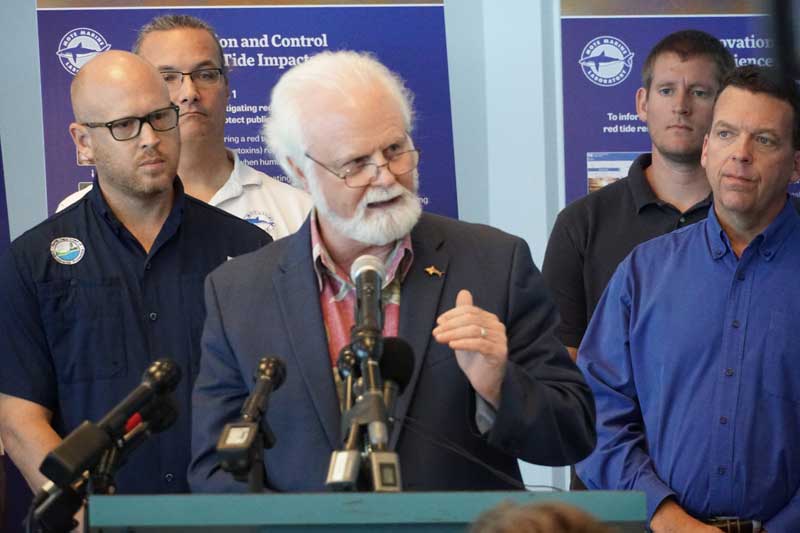 Environmentalists are questioning Gov. Rick Scott’s priorities in the wake of his $2.2 million budget reallocation to Mote Marine Laboratory aimed at technology to fight red tide.

Mote president and CEO Michael Crosby, as well as top officials with the Florida Wildlife and Conservation Commission and the Department of Environmental Protection, heralded the new initiative during a Sept. 24 news conference at Mote’s Keating Marine Education Center in Sarasota.

Scott, in a news release, stated, “As our state continues to battle naturally-occurring red tide along our Gulf Coast, we will stop at nothing to help our communities deal with this issue.”

“We got involved with using and testing clay as a potential many, many years ago. And it didn’t pan out at that time,” Crosby said after the news conference.

“As technology advances, it’s worth looking at it again” to determine if clay in small amounts could become more of an attractant to the algae without negative impacts, he said.

Technology holds promise, Crosby said, but the studies must be done carefully, with limited pilot experiments in the environment “so it doesn’t do more harm than good.”

He expects results in six months.

Radioactive phosphate clay didn’t work against the red tide in past Mote trials, according to Larry Brand, a University of Miami researcher, who studied more than 50 years of red tide data and published in the journal of Harmful Algae as “Long-term Increase in Karenia brevis Abundance Along the Southwest Florida Coast.”

Some environmentalists fear that clay can accumulate on the ocean floor, disrupt the food web and smother habitat.

“I don’t think (Scott’s) priorities are straight,” said Justin Bloom, founder of Suncoast Waterkeeper, a nonprofit with a mission to protect Sarasota and Manatee counties’ waters.

“While he thinks there are positive optics, it’s continuing a disturbing trend of a failure to address the underlying problems of red tide … the human-caused pollutants fueling red tide,” he added.

Bloom suggested Scott focus on getting to the “root of the problem,” strengthen environmental enforcement and rehire hundreds of DEP staff the governor dismissed early in his administration.

With public pressure on the red tide issue and Scott running for U.S. Senate, he said the current administration “apparently needs to be seen doing something.”

Brand’s research concluded that red tide is 15 times worse than 50 years ago.

While technology might provide a short-term solution for some localized issues, he said it wouldn’t help with the current 1,000 square miles of red tide.

“What obviously has increased is us,” Brand said, referring to population growth, fertilizer discharges and their impact the water.