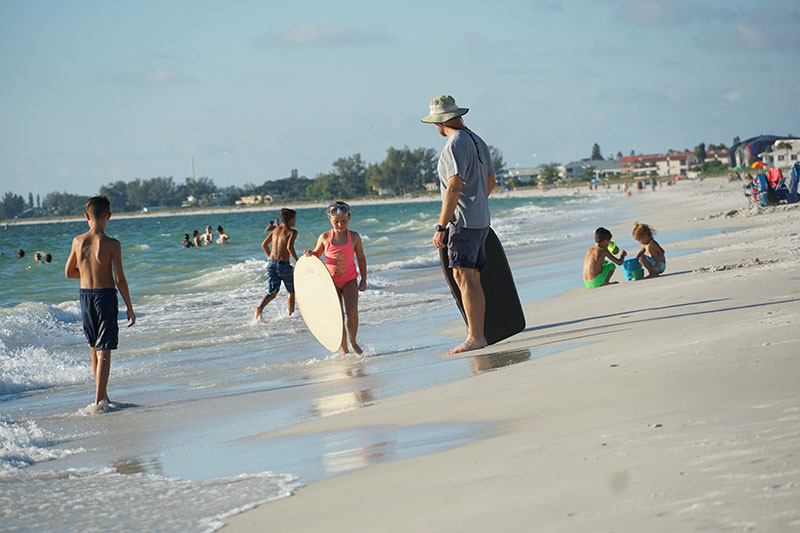 People enjoy the surf and sand Oct. 20 at the Manatee Public Beach, 4000 Gulf Drive, Holmes Beach, and on up the island. Red tide readings indicated no presence of the algae as beachgoers returned to the shores to enjoy the weekend.Islander Photo: Kathy Prucnell

The clear blue water told a tale the testing confirmed: Red tide around Anna Maria Island was almost nonexistent the week of Oct. 15.

And it is certainly good riddance for the harmful algae bloom that has plagued Florida’s west coast for a year and Manatee County beaches since the first week of August, fouling the shorelines on the Gulf and in the bays with tons of dead sea life, bringing respiratory issues to humans and marine mammals and seriously impacting businesses.

On the daily map compiled by the Florida Fish and Wildlife Conservation Commission, only Bradenton Beach beaches tested positive in Manatee County Oct. 15 for Karenia brevis, with low concentrations. The northern Sarasota Bay waters, as well as Palma Sola Bay, were clear — no red tide detected.

The mid-week FWC report Oct. 17 echoed the findings, with only low and very low presence, as well as no red tide reported on coastal waters.

Other counties experienced increased levels, with Sarasota and Pinellas each having high readings at greater than 1,000,000 cells per liter.

Scientists and lawmakers gathered Oct. 17 in Pinellas County for a roundtable on red tide.

Jacqueline Dixon, the dean of marine sciences at the University of South Florida, told U.S. Sen. Bill Nelson, D-Florida, and other officials that stronger monitoring of red tide is needed. She also discussed the practice of spreading clay in affected areas to help control red tide, an ongoing research project at Mote Marine Laboratory.

Dixon, according to a report on WTSP-10 News, reiterated what scientists have been saying: This year’s unusually bad outbreak of red tide is a combination of warming seas, lack of wetlands and pollution.

“Most beaches in Manatee/Sarasota counties are not showing signs of respiratory irritation or dead fish. Winds are blowing offshore, which would bring the bloom away from shore,” Kettle said.

Closer to home, Anna Maria Island continued a return to normal, as beaches filled up the weekend of Oct. 13-14, seasonal residents returned, visitors increased and businesses came back to life.

For weeks, the parking lot had been empty and crowds had stayed away. Now, that’s beginning to change.

“There has been a definite uptick. We’ve noticed a lot of folks from the Midwest — it’s their fall break. Other places, too,” Garret said. “It’s a good thing.”

Capt. Kathe Fannon, a tour guide operator out of Cortez for 17 years, said she, too, has seen business rebound to pre-red tide levels in the past several weeks.

For weeks, we didn’t run any boats at all. Now we are back to running two boats every day.”

“The water is really clear and the visibility is incredible right now. I’ve seen no sign of red tide,” she continued.