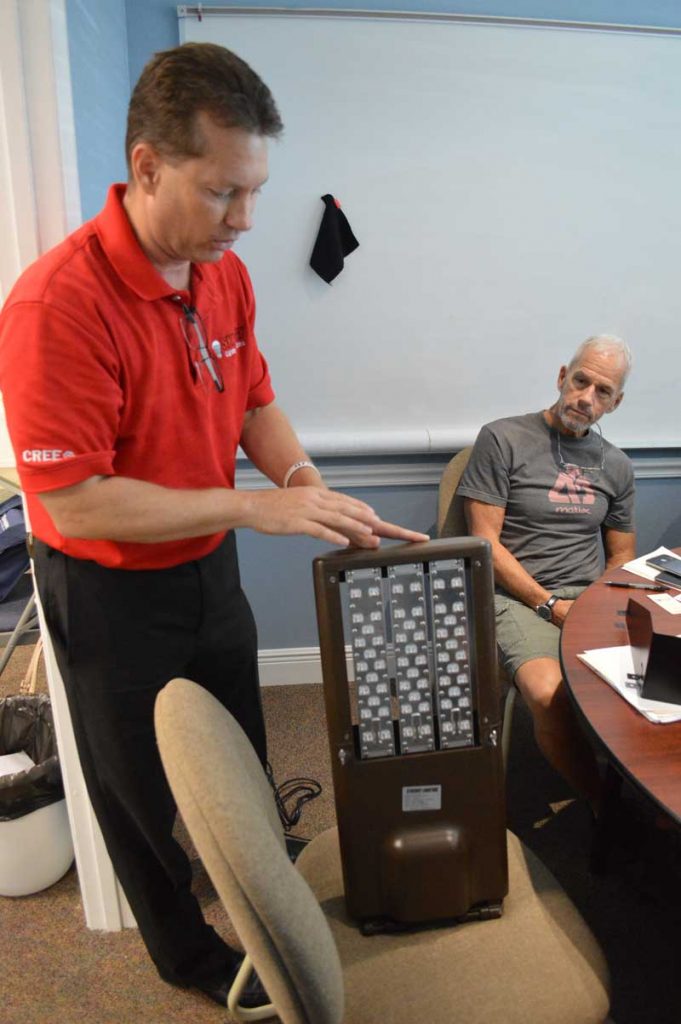 The meeting was held in the Bradenton Beach City Hall conference room, 107 Gulf Drive N., but was not a city meeting.

Representatives from Anna Maria and Bradenton Beach, along with reps from Florida Power and Light and the Florida Fish and Wildlife Conservation Commission, attended the meeting in person or by phone.

Fox said Sept. 24 that she heard other cities in the state installed streetlights bright enough for pedestrians and drivers that shine at a frequency sea turtles cannot see.

Upon hatching and after nesting, sea turtles follow the reflection of the moon and stars on the surface of the water into the Gulf of Mexico.

However, lights visible from the beach can disorient turtles and lead them away from the water, toward bushes, pools and roads, where they can become victims of predation, dehydration or roadkill.

According to Fox, some disorientations in 2018 might have been caused by streetlights visible from the beach.

She said she had heard FPL is interested in piloting a program on the island with people and turtle-friendly streetlights.

At the meeting, Fox told Eric Culling, an FPL senior sales representative who attended by phone, that Synergy sells the amber-colored, FWC-approved streetlights that used in Treasure Island and she suggested FPL consider the bulbs and fixtures for Anna Maria Island.

Culling said the lights from Synergy could be an option.

Tanya Long, a Florida Fish & Wildlife Conservation Commission biologist who dialed into the conversation, said she spoke with a FPL representative about possibly installing an amber chip in fixtures in place.

Culling said the chip is an alternative FPL is considering to bring lights into compliance with sea turtle lighting regulations.

He also said if amber bulbs are installed, they would remain year-round.

Fox asked Culling if LED streetlights, such as those installed in Holmes Beach could be converted along with lights in Anna Maria and Bradenton Beach.

He replied, “absolutely,” adding that switching to sea turtle-friendly bulbs is part of a long-term plan in Holmes Beach.

The group agreed the Florida Department of Transportation needs to be involved in discussions since Gulf Drive is a state road in Holmes Beach and Bradenton Beach.

Culling said he would provide a report labeling the streetlights on the island to determine areas that would benefit from turtle-friendly bulbs.

“We’ve wanted to move forward with this for a long time now. So, this is very exciting,” Fox said. “This is what our island is all about — providing an environment that is safe for people and allows wildlife to flourish.”