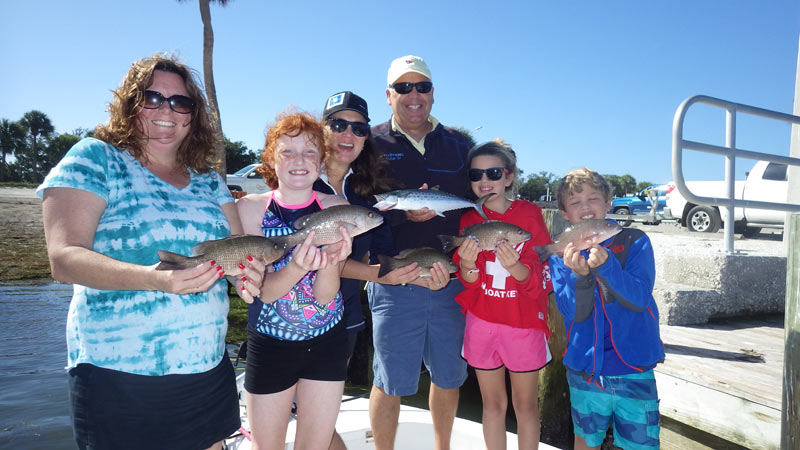 Debra, left, and Lily Robertson of Sarasota are joined Nov. 14 by family visiting from Maine, Mei-An-Tsu, Karl, Hanna and Kin Anderson, on an offshore fishing trip guided by Capt. Warren Girle. Using live shiners, they caught and released gag grouper, and kept a few snapper and mackerel for lunch.

Although red tide lingers around the shores of Anna Maria Island, fishing to the east remains quite good. In fact, in some places, it’s excellent.

Fishing the eastern shorelines of Tampa Bay and its connecting waters is providing some of the best inshore action of the year.

Catch-and-release snook fishing is epic. And spotted seatrout are making a strong presence on the flats, as water temps drop. Deep grass flats with scattered potholes are holding schools of the ever-popular inshore fish.

As for catch-and-release redfish, I’m seeing some, but not as many as I would like. Other action inshore includes mangrove snapper, which can be found on just about any structure in Tampa Bay. Also, jack crevalle, ladyfish and bluefish are making a showing, especially around schools of baitfish.

For those braving a trip offshore, fishing is proving to be rewarding. Both Capts. Jason Stock and David White are balancing the chance of encountering patches of red tide on trips offshore against the rewards. Both are reaping the benefits of the risk with rewards for client anglers — catches of blackfin tuna, amberjack and snapper and an early showing of kingfish.

On my Southernaire charters. I’m doing quite well with catch-and-release snook, seeing morning sessions of 30-40 snook on the hook.

I’m finding a few catch-and-release redfish mixed in with the snook bite, although most reds are 16-18 inches. There are some larger ones hanging around docks and oyster bars, but they are scattered and hard to target.

Spotted seatrout are showing quite good on deeper grass flats. Most of the ones my anglers are catching are on the small side, although we are catching a lot.

Lastly, mangrove snapper are available around structure. I’m finding them to be a little leader-shy, so I’m scaling down to 15-pound fluorocarbon with a size-2 hook. Chumming heavily is aiding in getting them to bite.

Capt. Warren Girle is working inshore, finding catch-and-release snook and redfish are producing a great bite for his clients. Free-lining live shiners over shallow flats or around residential docks is attracting both species to the hook.

Moving to deeper water, Girle is anchoring and chumming around artificial reefs and wrecks. These areas are host to a variety of species — mangrove snapper, Spanish mackerel and gag grouper. All species are being caught in keeper-sizes — even the gags.

Lastly, spotted seatrout and bluefish are being found around deep grass flats and channel edges.

Jim Malfese at the Rod & Reel Pier says fishing was a little spotty as of his report. With patches of red tide washing in and out of Tampa Bay with the tides, fishing is unpredictable at the island’s northern-most pier. Conditions can change from good to bad in a matter of a few hours. When the water is clean, pier anglers are catching and releasing plenty of snook. Black drum, sheepshead and redfish are present with mangrove snapper in the mix, too.

During times when red tide is hovering on the pier, it may be best to go inside the restaurant and enjoy a cold beer and a cheeseburger.

Capt. Aaron Lowman is fishing the flats of Tampa Bay, where he is finding catch-and-release snook the predominant bite. Free-lining live shiners over the flats is yielding Lowman’s clients catches of 30-50 snook per day. Mixed in with the snook are scattered spotted seatrout and catch-and-release redfish.

On days when red tide is minimal, Lowman is patrolling the beaches, where he’s finding numerous eager blacktip sharks and a spattering of pompano. Jigging for the pompano is proving successful.

Capt. David White of Anna Maria Charters is running offshore for some of the most sought-after migratory fish — blackfin tuna and amberjack.

White is free-lining large baits over structure to lure these predators to the hook. Also, while fishing offshore, mangrove snapper, Spanish mackerel and gag grouper are taking the hook for White’s anglers.

Moving inshore, White is cashing in on the phenomenal snook bite. Although all catch-and-release, these linesiders produce some of the best action that the flats have to offer sport fishers. While targeting snook, White also is hooking up on mangrove snapper for the cooler and some jack crevalle.

Capt. Jason Stock is working offshore with good results. He’s finding the push past the red tide is proving to be quite good for a variety of migratory species — blackfin tuna, amberjack, kingfish and even a couple sailfish.

Moving inshore, catch-and-release snook action is keeping Stock busy. Also, while on the flats, Stock is hooking clients up with numerous spotted seatrout. Fishing structure in Tampa Bay is producing good action on gag grouper, which Stock is tagging and releasing.