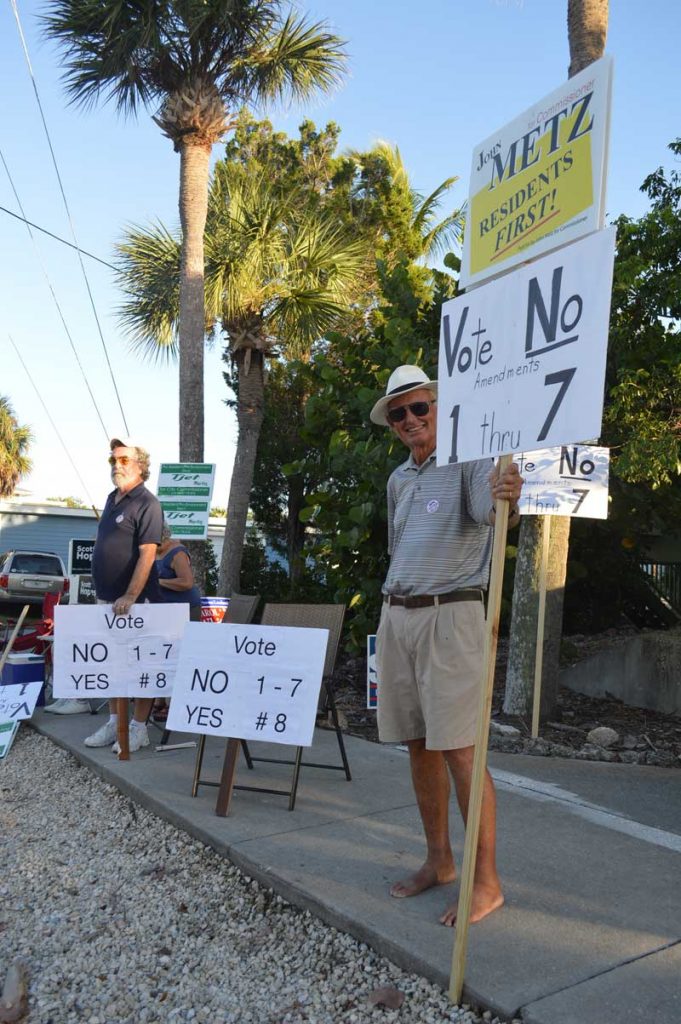 The tide has turned.

The vote was 295 “yes,” or 58.99 percent of the vote, and 208 “no” to charter amendment 1, which reinstates “at-large voting for all elected officials, including mayor and four neighborhood ward commissioners.”

“This puts us right back where we were in 2016,” said John Metz, former treasurer of the now-defunct Concerned Neighbors of Bradenton Beach, a grass-roots organization that proposed three charter amendments that passed in 2017.

One of CNOBB’s charter amendments replaced the four-ward representative system with an at-large election for commissioners.

The Nov. 6 vote reversed that amendment.

The charter committee was formed by the city to review the document for consistency with amendments approved by voters in 2017 and amendments proposed for 2018 by Keep Our Residential Neighborhoods, a political action committee.

Metz is a founding member of KORN.

Following a September hearing in circuit court for the initiatives, KORN and the city are awaiting a final order from Judge Lon Arend, which will determine if KORN’s proposals will be voted on in a special election.

When the KORN amendments were presented to the city in June, city attorney Ricinda Perry said the proposed amendments would violate the city charter and did not fully comply with state statutes.

The city commission voted against submitting the petitions for the KORN amendments to the Manatee County Supervisor of Elections Office, based on advice from Perry, and formed its own committee to review and propose amendments to the city charter.

The vote was 413 “yes,” and 105 “no” for charter amendment 2, which clarifies residency and requires candidates for elective office to be registered voters permanently residing in the city.

The second amendment passed by the largest margin of the amendments, with 79.78 percent of the vote.

The third charter amendment, which provides for a balanced commission form of government, passed with 308 “yes,” or 61.55 percent, and 193 “no” votes.

Charter amendment 4, providing city commissioners with exclusive hiring and firing powers for city staff, passed with 290 “yes” votes, or 59.12 percent of the vote, and 208 “no” votes.

Charter amendment 5, which clarifies the articles in the charter regarding provisions for elected officials, qualifications and election procedures, received 306 “yes” and 183 “no” votes. It passed with 62.82 percent of the vote.

Charter amendment 7, clarifying the title of an article dealing with ordinances, passed with 320 “yes” and 172 “no” votes, representing approval from 65.22 percent of voters.

“Everything was put out on the table,” Mayor John Chappie said following the Nov. 6 election. “We had the charter review committee and everything was done out in the public, where everybody had an opportunity to participate. And the people have made their choice.”

There were no early voting polls open on Anna Maria Island, but island voters were able to vote in advance at other polls, including the SOE, 600 301 Blvd. W., Suite 108, Bradenton.

The total turnout percentage was 74.6 percent.

Park rezone passes handily in Bradenton Beach
The referendum to properly zone Katie Pierola Park, 2212 Gulf Drive N., Bradenton Beach, as a park, passed with a supermajority of 460 “yes” and 56 “no” votes.

The referendum passed by the largest margin in the Bradenton Beach election, with 89.08 percent of the vote

The park will be rezoned from R3 multifamily, which does not allow for a public park, to PRA, public recreation area.

The rezone prevents the park from being sold or developed as a commercial or residential property.

The commission unanimously approved the rezone in August. The city charter required the matter be voted on as a referendum.