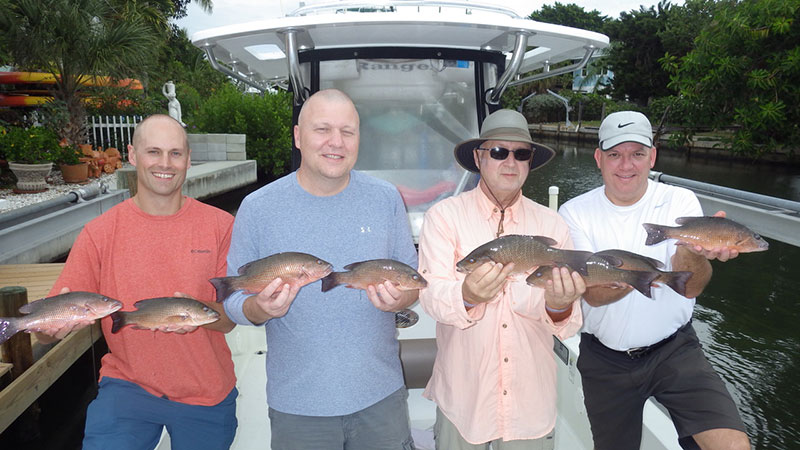 Rob Meyers, left, and Tory Meiborg, both from Iowa, fished offshore Nov. 2 with Chuck Sobieck of Longboat Key and Barry Franz of Iowa. They showed off their catch at the dock with their guide and photographer, Capt. Warren Girle. Using shiners for bait, the group produced mangrove snapper for dinner and released several undersized grouper.

Fishing to the north of Anna Maria Island remains consistent in the vast waters of Tampa Bay.

Catch-and-release snook and redfish provide great action for sport anglers. Fishing structure is proving to be good for hooking into mangrove snapper, gag grouper, mackerel and jack crevalle. Venturing out to the Gulf of Mexico is hit or miss due to patches of red tide that seem to arrive whenever we have strong winds out of the south or southwest. Luckily, fishing the bays and Manatee River is supplying plenty of inshore action.

On my Southernaire charters, I’m finding catch-and-release snook action is exceptional. Most catches are 20-28 inches, with a few bigger ones mixed in. On many charters, I’m seeing anywhere from 20 to 50 snook being reeled up.

Mixed in are mangrove snapper and catch-and-release redfish, depending on the spot I’m fishing. Mangrove snapper are being caught in deeper water around structure. Fishing reefs and wrecks is providing limits of these fish for my clients.

Capt. Warren Girle also is enjoying catch-and-release action on snook and redfish. Fishing in southern Tampa Bay and its adjacent waters to the east is providing great fishing for both species.

Mangrove snapper and Spanish mackerel are showing up in Tampa Bay, especially around reefs, wrecks, bridges and docks.

Lastly, deep grass flats are producing spotted seatrout, as well as a menagerie of other species, including ladyfish, jack crevalle and bluefish.

Capt. Aaron Lowman is finding good numbers of mangrove snapper around rocks and docks. Free-lining shiners around residential docks is producing near limits of these popular fish. When fishing structure — reefs and wrecks — both bottom rigs or free-lining baits is working well.

While targeting snapper on wrecks or reefs, Lowman is finding Spanish mackerel quite accommodating, along with a few jack crevalle and ladyfish.

Catch-and-release fishing for snook and redfish is going strong for Lowman, especially on the linesiders. Snook rallies of 30 or more fish are common during a morning charter.

Jim Malfese at the Rod & Reel Pier is seeing numerous species of fish coming to the deck. Mangrove snapper are being reeled up by anglers using live shrimp as bait. Sheepshead and flounder are being taken in this fashion as well.

Catch-and-release snook and redfish are being caught on a daily basis at Anna Maria Island’s northernmost pier, mostly by anglers baiting their hooks with pinfish and shiners.

Capt. Rick Gross is enjoying catch-and-release snook fishing on his charters. A multitude of linesiders are getting to inspect the interior of the Fishy Business before they are quickly released back to the water. Free-lining shiners over shallow grass flats where oyster bars and mangrove shorelines exist is proving to hold the most fish.

Mixed in with the snook bite are respectable amounts of catch-and-release redfish.

Capt. David White of Anna Maria Charters is catching plenty of fish, although he’s sometimes kept busy rescuing sick sea turtles from Tampa Bay. Catch-and-release snook and redfish are proving to be great action for White’s clients. The catch-and-release snook are especially abundant, which is keeping White busy for hours at a time.

Lastly, fishing structure in Tampa Bay is producing limits of mangrove snapper for White. Gag grouper are in the mix.

Capt. Jason Stock is patrolling the inshore waters of Tampa Bay with good results. Gag grouper and mangrove snapper are being caught with regularity. Fishing structure for the gags is proving to be good, especially during slower moving tides. The same applies for the snapper.

Catch-and-release snook and redfish action is keeping Stock busy when he’s not targeting groupers and snappers for his cooler.