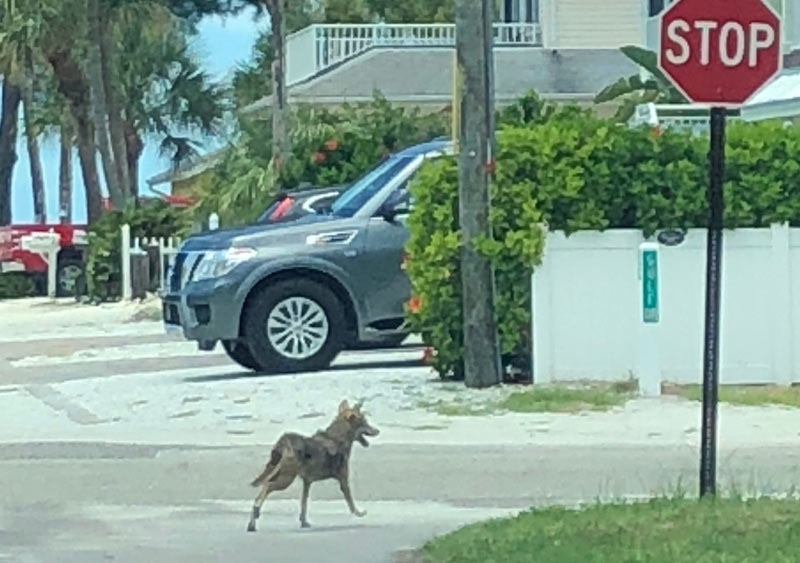 Inaction might be the only action when it comes to coyotes on Anna Maria Island.

At least, that’s the conclusion of officials in Holmes Beach and Longboat Key for now.

Holmes Beach Police Chief Bill Tokajer said in an interview Nov. 15 that as long as the coyotes do not become aggressive, no action will be taken to remove them.

For now, the department will monitor reports of coyotes.

Longboat Key officials met with a Florida Fish and Wildlife Conservation Commission representative about removing coyotes from the town and then decided not to act because any coyotes trapped there would be killed.

Also, the FWC reached out to Anna Maria officials to offer technical assistance and regulations regarding the relocation of coyotes, according to the commission’s Southwest region public information coordinator, Melody Kilborn.

Anna Maria Mayor Dan Murphy planned to address coyotes at the Coalition of Barrier Island Elected Officials meeting set for Nov. 13, but the meeting was canceled. The next BIEO meeting will be at 2 p.m. Tuesday, Jan. 15, 2019.

Murphy said in an interview Nov. 15 there would be “some kind of a concerted effort” with Holmes Beach and possibly Longboat Key. He added he had not discussed the issue with Bradenton Beach Mayor John Chappie, but he planned to do so.

Murphy said the efforts are in the fact-finding stage.

According to Kilborn, removal of coyotes from an area is ineffective because coyotes quickly move in where others were removed and their litters compensate for those lost from a pack.

Tranquilizers are ineffective because they do not take immediate effect. So coyotes might evade their captors before going down.

According to Tokajer, snare traps are effective but inhumane and, he said, capturing coyotes in cages only works about 10 percent of the time.

Captured coyotes must be euthanized or relocated, but neither action is simple.

A coyote only can be relocated to 40 contiguous acres within the same county where it was captured, and there must be written permission from the landowner accepting the animal.

Tokajer said killing coyotes is not viable — since the animals have done no harm.

“This is their environment just as much as ours,” the chief said. “So as long as they’re not a danger to people, I don’t know that there’s any action to take at this time and, speaking to FWC, they have the same feeling.”

While Holmes Beach and Longboat Key officials have made their decision on the matter and shared their information with Anna Maria officials, Murphy said he wants more research.

“That was their decision,” he said. “I don’t know where we are yet because we’re not finished studying it. It’s kind of premature at this point to say where we’re going to go until I can get all the facts in and have a discussion with the commission.”

Murphy said he is still exploring the city’s options.

People can reduce the potential for problems with wildlife by removing food sources, such as garbage and pet food, from around their homes.

People who encounter a coyote should wave their arms and make loud noises to scare off the animals if they come close, according to the FWC.

Cats should be kept indoors and owners should walk dogs on a short leash and avoid areas with heavy ground foliage.

8 thoughts on “No easy solution for coyote influx”