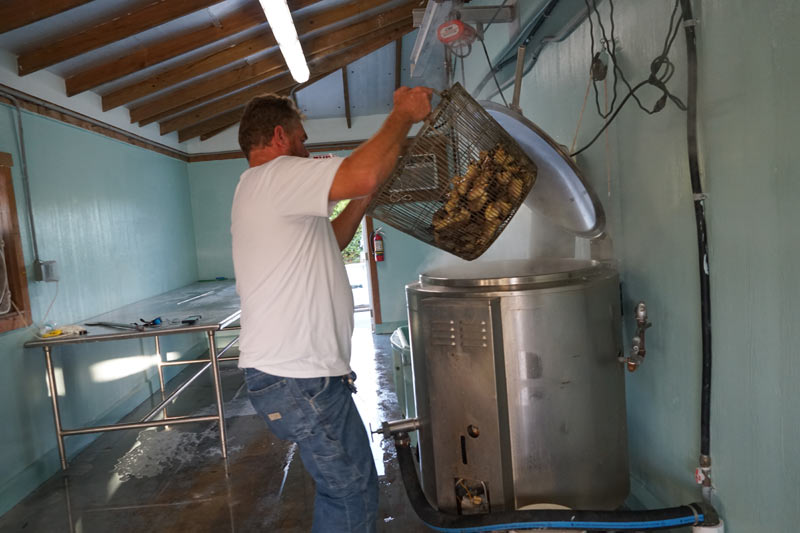 Red tide has long been tied to scarcity in the stone crab fishery and now there’s the upcoming mullet run to raise added concern.

From the docks in Cortez, crews employed by fish processors, as well as independent fishers and crabbers, are in the midst of the winter stone crab season — baiting, checking and pulling the traps to remove the claws of legal size, a minimum 2 3/4-inch-long claw, from pincher tip to elbow.

Fewer landings are evident in the market.

While scientists say a variety of problems contribute to the industry’s downturn — such as hurricanes, overfishing and an arch predator, the octopus — this year, the negative impact of the yearlong red tide on the southwest coast of Florida is undeniable.

“The stone crab landings since 2000 are lower than the prior decade,” wrote FWC Institute researcher Ryan Gandy in a Nov. 15 email to The Islander.

He also noted a similar decline in invertebrate fisheries across the Gulf “due to large-scale changes in environmental conditions and weather patterns.”

“For the past two stone crab seasons from Naples to Pinellas County have been heavily impacted by red tide and hurricanes,” Gandy added.

Harmful algal blooms — locally, the presence of red tide or Karenia brevis — are challenges to the mullet fishery as well.

Stone crabs, red tide update
Mote Marine Laboratory stone crab researcher Phil Gravinese has undertaken a series of studies designed to add to the body of knowledge in the field.

In one study, he looked at the impact of red tide on the swimming behavior of stone crab larvae.

Another monitored adult stone crabs off the Mote docks that jut into Sarasota Bay to determine whether red tide impacts only the crab’s viscera — the gut tract — or, whether the brevetoxin spreads to muscle, including the claws, the edible parts of the stone crab.

A third study examined the impact of stone crabs that subside on a red tide tainted diet.

Gravinese found the larvae became disoriented and died in high levels of red tide — 100,000 to 1 million per liter of water concentrations — but that 60 percent survived red tide at moderate levels.

Previewing the published study, he said his findings support his article’s argument that the effects of red tide will be lessened if there is a corresponding reduction of land-based nutrient runoffs that are known to exacerbate harmful algal blooms.

Results from the field study in Sarasota Bay are preliminary, he added, awaiting for a comparison in non-red tide conditions. Gravinese, however, noted fewer instances of stone crab mortality due to red tide in areas of tidal flushing.

He also said preliminary results from the clam diet comparisons confirm red tide is not entering the muscle, but added the red tide could be having “sublethal” impacts, such as flu symptoms, effects.

Mullet versus Karenia brevis
With the approaching annual mullet run — typically between Thanksgiving and February — the fishers fear a down year due to the toxic red tide bloom.

Mullet is visibly teeming in bays, rivers and canals. The silver schools of fish are readying to spawn, when they bolt into the Gulf of Mexico up to 10 miles offshore.

The commercial fishers watch and wait for the mullet to run — hoping for boatfuls of female mullet carrying red roe, fetching prices of $1.30 per pound in 2017, compared to the 20 cents a pound for the male mullet.

But large quantities of mullet died because of red tide in waters around Anna Maria Island in August and September, leaving questions about the bounty this mullet season.

In a Nov. 15 email response, FWC researcher Michelle Kerr said it was “impossible to speculate on how the red tide will affect mullet this spawning season as red tide concentrations are patchy and variable, depending on wind and currents.”

But, she pointed to the danger posed to all marine life by the red tide organism, which produces brevetoxins that are ingested, inhaled and consumed by species that eat the toxic prey.

“In most instances, death from brevetoxin exposure is immediate; however, death can occur after long-term exposure to toxins,” Kerr wrote, adding fish die when exposed to 250,000 K. brevis cells per liter of water.

FWC considers the 250,000 level a “medium concentration.” High and medium levels have been reported in Sarasota Bay and the Gulf of Mexico near Anna Maria Island since August.

Anna Maria resident Luther Sasser, a commercial fisher working out of Cortez, said Nov. 13 that “red tide doesn’t look bad” and there “seems to be a lot of mullet around.”

But, he added, he hopes the mullet are not killed by the red tide as they rush to spawn in the Gulf of Mexico.

Sasser laments the presence of “more red tides now than in the past,” and hopes a storm blows the K. Brevis from shore before the mullet runs, which he expected around Thanksgiving.

“When Mother Nature makes it so they want to go, they’re going to go,” he said.

“They’ll swim right into that red tide when the barometric pressure and other elements are right for the run,” Sasser said.

Not only are the fish that spawn caught up in the red tide, the hatch from the spawn may die from the red tide.

“It’s not good to have red tide. But if you’re going to have it, it’s better to have it in summer, not the winter.”