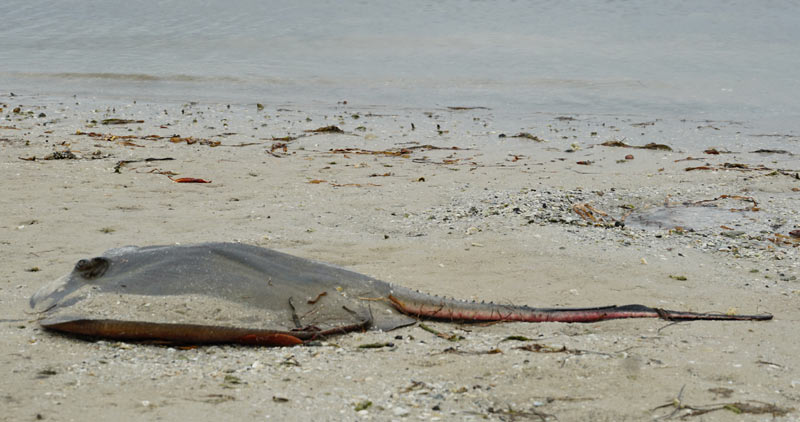 Later, when she arrived to a client’s home in west Bradenton, she was still coughing.

“It’s the red tide over at the beach. It’s still there. It’s like I can almost smell it,” she told The Islander.

But, soon after, red tide levels receded again — down to medium concentrations of Karenia brevis, the harmful algae responsible for the bloom. That bloom moved into the Anna Maria Island area Aug. 3 but has plagued the southwest Florida coastline for more than a year.

Officials and scientists continue to seek resolutions for the crisis.

On Nov. 13, the Sarasota-based Mote Marine Laboratory announced new Red Tide Institute will be headed by Cynthia Hall to focus on studying and testing mitigation and control technologies for red tide. She will begin work Jan. 1, 2019.

Currently, Mote has five research programs on red tide and Hall’s expertise has been focused on mitigating a major impact of red tide, airborne toxins that cause respiratory irritation in humans.

The midweek FWC report Nov. 14 showed lessening concentrations — down 25 percent in some locations — in Manatee County. However, a few spots with more than 1 million parts of red tide per liter of water remained.

Fish kills were reported in Manatee County, though only scattered dead fish were observed on the shoreline. In Palma Sola Bay, a dead ray with a 2-foot wingspan was found beached Nov. 15 on the north side of the causeway. Red tide was the likely cause of death, as no injuries were visible.

Capt. Scott Moore continues to fish the waters surrounding Anna Maria Island, as he has done since he was a child.

“We are moving out farther to fish. The inshore reefs are dead. The offshore reefs are OK. The Manatee River is good and up into Tampa Bay — it’s loaded with fish,” Moore said.

“They didn’t have the heavy concentrations of red tide we had here along the coast. Down south of Longboat Pass it’s really bad. It’s a hard thing to predict. It might be one place and a half mile away, nothing,” Moore said.

Moore said it would take time for marine life in the coastal waters to return to normal.

“They talk about old Florida all the time. Red tide is old Florida. It’s been here all along, just not this bad, not this long.” Moore said.