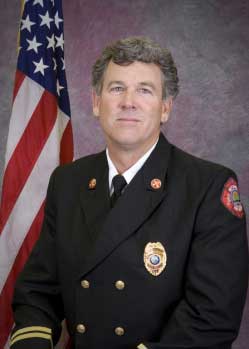 After 43 years in the fire service, Chief Tom Sousa will retire early.

He’s a little more than four years into his six-year contract to lead West Manatee Fire Rescue and has served more than 13 years with WMFR.

Sousa announced his plan to retire in October 2019 at the Nov. 13 WMFR commission meeting. He recommended a workshop to discuss how the district would search for his successor.

According to Sousa, the decision was made for undisclosed circumstances, and was discussed with individual commissioners before his announcement.

His departure will come 18 months before his contract is set to expire in May 2021.

“I have enjoyed every bit of it,” Sousa said of his time at WMFR in an interview Nov. 20. “I have no regrets. I’ve had a great group of people to work with.”

Sousa entered the fire service in 1976 as a firefighter/paramedic for the Longboat Key Fire Rescue and worked his way up to fire lieutenant, shift training officer and deputy fire chief in 30 years. He retired from LBKFR in 2006.

He began work at WMFR in 2006 as the district’s training captain.

When Andy Price announced his retirement as chief in November 2014, Sousa took over interim responsibilities before being appointed fire chief in May 2015.

Sousa said the district needs at least three paramedics per station every shift to avoid hiring overtime staff. Several WMFR firefighters are training, but that can take a year and paramedics usually need time to become operational.

The chief said the district might not reach its goal of staffing each engine with a paramedic until 2020, but he is proud of launching the program.

When it comes to helping the district transition to a new fire chief, Sousa said much of that conversation would be saved for a workshop, which will be at 5 p.m. Tuesday, Jan. 15, 2019, at the district’s administration building, 6417 Third Ave. W., Bradenton.

Part of the process might involve revising the position’s requirements.

Sousa said the administrative battalion chief position requires several landmarks and certifications not required of a fire chief, including a bachelor’s degree.

Beyond changing job requirements, Sousa said the workshop would give district leadership a chance to discuss the merits of hiring internally or externally.

“Do I believe that we have internal candidates that are competent and capable and have all the qualities necessary to be a fire chief? Absolutely,” Sousa said. “And that’s one of the goals in our strategic plan, to build a mentoring program that will develop our personnel internally.”

The WMFR board of commissioners will decide who will succeed Sousa, who plans to remain in the area after retiring, but wants to travel with his wife, who will retire six months later. Sousa also will spend more time sailing — his favorite pastime.

Sousa said he would have liked to finish the remaining 18 months of his contract, but believes it is time to move on and he is leaving the district in a great position to move forward without him.

“We’re in a great situation right now with the district,” he said. “The district is coming along. It’s doing really well. I think our service is excellent, I think our guys do a great job.

Very, very few issues at all.”