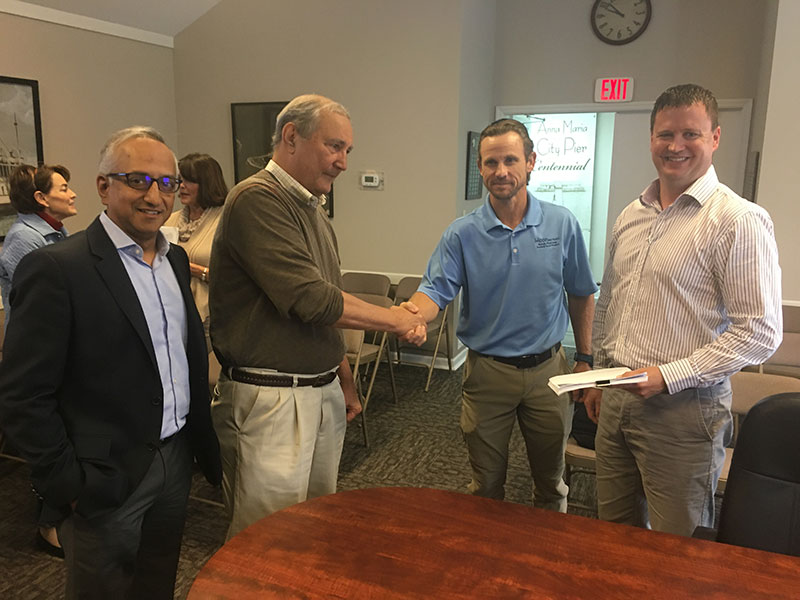 With construction plans set and a contract signed, work on the new Anna Maria City Pier is set to begin with the new year.

Mobilization and site preparation will begin in late December. The first pilings will be driven into Tampa Bay in January, according to Murphy.

“I think we have a solid contract here,” the mayor said. “I don’t think it’s a contract you might see in other cities where there’s a lot of pitfalls and caveats and nondeliverables. This is an aggressive schedule and good price and solid company we’re doing business with.”

“These are not five guys in a room with an internet connection,” Murphy added.

The contract shows a decrease of $332,837 from Icon’s $3,665,330 bid, which was the lowest satisfactory bid in the city’s second request for proposals on the project.

Much of the savings can be attributed to the use of wood bents instead of concrete bents along most of the pier walkway, as well as the city’s decision to purchase 12-inch spun concrete pilings ahead of time from Pipe & Pilings Concrete USA in September.

However, Murphy said some pilings aren’t the right height for the project. Those pilings can be returned because Icon employees found 14-inch concrete pilings in the same yard for $8,863.

By using wood bents — the main brace on top of the pilings — instead of concrete bents along much of the pier walkway, the city will save $180,000 but sacrifice longevity. The T-end still will feature concrete bents for improved support.

“So, life expectancy is a bit shorter on that walkway out, but we felt like that was a sacrifice we could make based upon protecting that T-end and the cost,” Saxena said.

The contract contains a $50,000 increase for using ipe wood for the pier decking instead of kebony wood decking. Murphy said Icon recommended ipe for the project due to its experience with the material.

“I’m pleased we’re going with the ipe wood,” Commissioner Carol Carter said in an interview Nov. 29. “It’s longer-lasting wood that has been proven.”

Also, the contract contains a proviso allowing the city to purchase its own material for the pier to save on sales tax. Icon would be responsible for bringing the material to the site.

The contract requires Icon to complete construction by Aug. 26, 2019, or pay a $975 penalty for every workday after.

“This is probably, at least in my opinion, the most important document that we have done this year,” Murphy told commissioners. “This document marks a major milestone for the city, for the history of the city and, from my point of view, a lot of people have worked very hard and long to get to this point in the project.”

The project’s significance was not lost upon the commissioners, all of whom expressed excitement for work to get started.

“I’m just looking forward to seeing that first piling going into the ground, so people in the public can see that there is progress being made,” Commission Chair Brian Seymour said in an interview Nov. 29. “I think a lot of the negative comments out there have been just because you can’t see the progress that is happening.

“I’m excited that we are actually going to get started on the pier,” Commissioner Doug Copeland said in an interview Nov. 29. “It’s been a long time coming, and I’m looking forward to enjoying it almost next time this year.”

“I was going to say it was a relief, and it’s exciting,” Commissioner Amy Tripp said in an interview Nov. 29. “It’s progress. I’m really pleased we’ve got this signed and we’re moving forward.”

Dale Woodland added, “I think it is a great contract, and I applaud the mayor for what he’s done to enhance that. I think it is a really good contract. I’m impressed with the timing, and I hope that we can meet that timing and get it done before the end of next year.”

“I’m so excited that we’re going to start!” Carter said. “I’m really pleased that the mayor and our engineer, Jay, were able to get some concessions in regard to price and timing.”