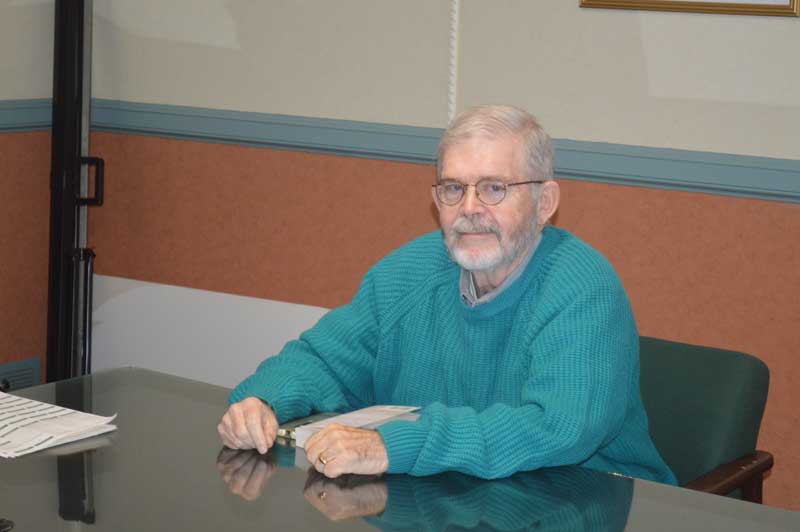 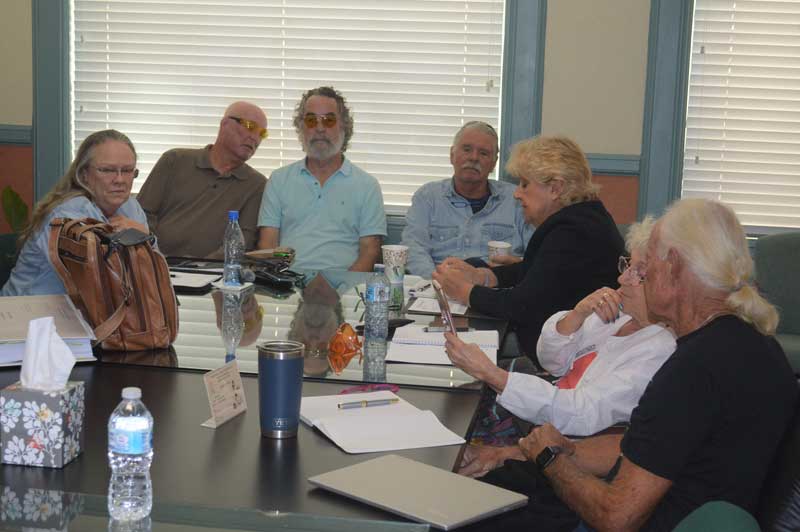 Tjet Martin, left, a defendant in the Bradenton Beach sunshine lawsuit, is seated Jan. 7 with her partner and former Mayor Bill Shearon, and the five other defendants, Bill Vincent, Reed Mapes, Patty Shay, Rose Vincent and John Metz, prior to a scheduled deposition at the court reporter’s office in Bradenton. 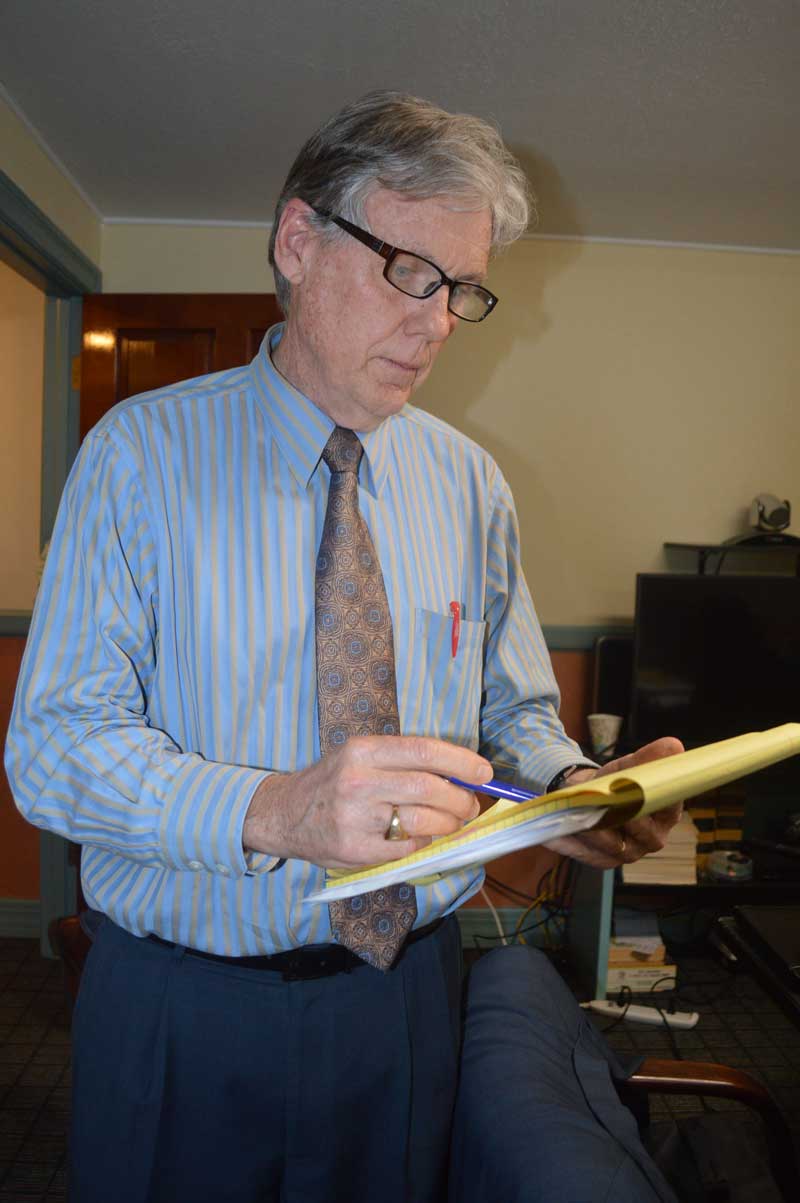 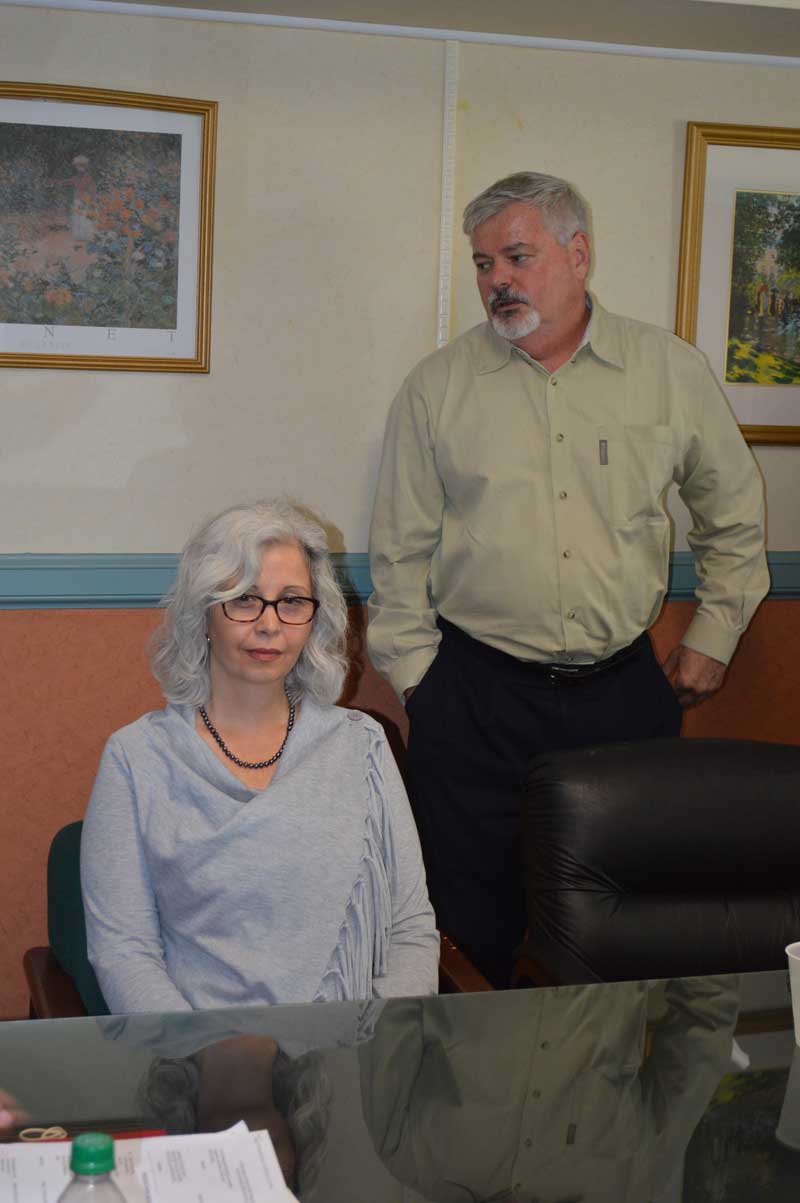 The defendants say the lawsuit is political and was filed in bad faith.

A plaintiff says he sued because the former Bradenton Beach board members broke the law.

A lawsuit filed in August 2017 by ex-Mayor Jack Clarke and joined by the city against six former city board members alleges violations of Florida’s Government-in-the-Sunshine Laws.

And the case is heating up.

The city’s attorney for the suit, Robert Watrous, and paralegal Michael Barfield also attended the depositions, which totaled nearly 10 hours, adding to the city’s legal fees, which now exceed $110,000.

Clarke apparently paid no legal fees and has no financial liability in the lawsuit based on an agreement signed by the city with Watrous.

The suit alleges violations of chapters 119 and 286 of the Florida Statutes by former board members Mapes, Metz, Tjet Martin, Patty Shay, and Bill and wife Rose Vincent, who were then members of the grass-roots group known as Concerned Neighbors of Bradenton Beach.

Bill Vincent founded CNOBB as “an all-volunteer organization that advocates for and enhances the quality of life in Bradenton Beach,” according to the now-defunct group’s mission statement.

But Clarke and the city disagree with CNOBB’s mission, claiming the board members violated Sunshine Laws by discussing city matters at meetings and through emails and text messages, in their efforts to overstep the city and amend the charter through citizen initiatives, bypassing the city’s charter review mechanism.

Clarke’s deposition began with Shults asking Clarke if he understands what it means to act in “bad faith,” to which Clarke responded, “That’s not in my lexicon.”

Clarke, Metz and the city have a history of political and legal disputes, including a lawsuit filed by Metz seeking to have Clarke’s name removed from the ballot for the May 19, 2015, mayoral recall vote.

Metz alleged Clarke failed to comply with the state’s “resign-to-run” law. However, the judge was not prepared to rule on the merits of the lawsuit without further study of the authorities, so Metz voluntarily dismissed the case, according to Metz.

During the Jan. 7 deposition, Shults determined that Clarke had not attended any planning and zoning board meetings in 2017, meetings where he claims parking garages were discussed.

However, Clarke claims the former board members violated Sunshine Laws during a CNOBB meeting when they allegedly discussed proposing a charter amendment that would prevent future multilevel parking structures in the city’s community redevelopment district.

Through discovery, Shults determined that Clarke had extensive communications with a reporter for The Sun newspaper, who followed CNOBB’s actions once the group formed and also had attended P&Z board meetings.

Additionally, one of the exhibits presented by Shults was an Aug. 1, 2017, email from reporter Joe Hendricks to Barfield stating CNOBB had committed a possible Sunshine Law violation.

Barfield is known locally for his involvement in a lawsuit that resulted in a commissioner recall in 2010 in Anna Maria and other Sunshine lawsuits in Manatee and Sarasota counties.

In the email, Hendricks sent a link to an article he wrote regarding the possible violation and a recording of a July 25, 2017, CNOBB meeting when the alleged parking garage discussion took place.

During Sanclemente’s Jan. 9 deposition, Shults inquired about who prepared her affidavit for the lawsuit.

She answered that she did not write or index the affidavit, but she signed the document that was emailed to her. She said she does not remember who wrote it.

As city clerk, Sanclemente is the keeper of the city’s public records.

Shults asked Sanclemente how the city disposes of public records — both hard copies and electronic.

She said hard copies of public records that are more than two years old are reviewed, and the police department takes unimportant documents to Tampa to be burned.

She said that as far as she knows, electronic records never have been purged, but she is working on a “disbursement list” of records for an IT company to remove from the city server.

She said the building department has a similar process, but requires state paperwork detailing the list.

Additionally, Shults asked how text messages to and from city officials are handled as public record. Sanclemente said staff and city officials are instructed not to text on city cellphones but, if they do, they have been told to save the exchange as an email and preserve the record by sending it to her.

Shults asked if she received many emailed text message records from staff and officials, to which Sanclemente replied, “No.”

At the end of the deposition, Shults made a records request to Sanclemente through Watrous, for a copy of the building department’s state form for document destruction and her disbursement list of removed emails.

He also requested a copy of the employee handbook outlining department and employee responsibilities, a document Sanclemente referred to in stating the duties of deputy clerks.

Additionally, Dye requested a copy of a meeting notice, as it would appear on the door of city hall.

A hearing for a motion of partial summary judgment for legal fees is planned for Jan. 31 at the Manatee County Judicial Center, 1051 Manatee Ave. W. Bradenton.