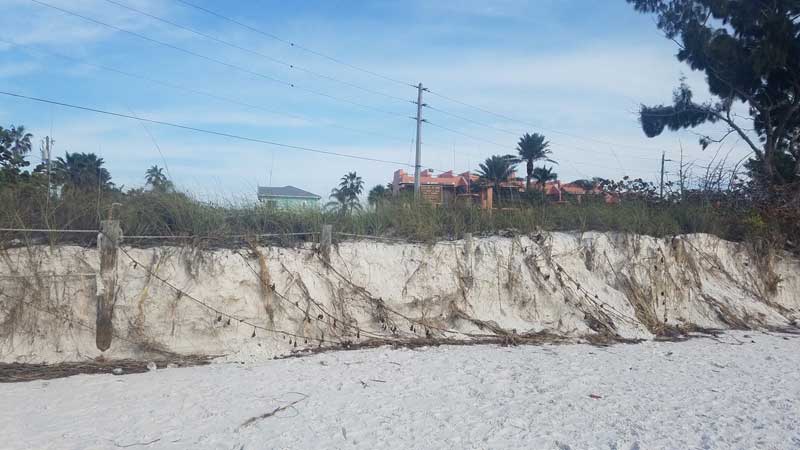 Bradenton Beach’s southernmost groin, created an escarpment, revealing a rope and bollards — part of a divider that protected the dune from being trampled by people. Islander Photo: Courtesy David Herrmann

The beach will have to endure another hurricane season, but the Gulf of Mexico shoreline on Anna Maria Island will be renourished in 2019.

Charlie Hunsicker, director of the Manatee County Parks and Natural Resources Department, said in an interview Jan. 8 that two renourishment projects, spanning 5.4 miles of beachfront south from 79th Street in Holmes Beach to Longboat Pass, are in the works for 2019.

Beginning in November 2019, the first project will bring sand to the shoreline from 79th Street to Fifth Street South in Bradenton Beach.

The U.S. Army Corps of Engineers will pay for 54 percent of the project, with supplemental and emergency funding appropriated from the U.S. Congress to counteract erosion caused by Hurricane Irma in September 2017, according to Hunsicker.

The state and Manatee County will split the remaining costs of island renourishment at 23 percent each.

Hunsicker said he expects the project to total $16 million.

“As a result of Hurricane Irma, we have a full year-and-a-half to two-year head start on addressing what would have otherwise been the erosion due to this last storm,” Hunsicker said. “If we had a completely healthy beach and observed these erosional losses, and then started the process today, it would take us at least another year-and-a-half to get to where we are right now.”

The cost of the second project will be split between the Federal Emergency Management Agency, Manatee County and the state of Florida, with FEMA covering 75 percent and the state and county sharing the remainder.

The project will span the shore from Fifth Street South to Longboat Pass and cost about $4 million, according to Hunsicker.

“We hope to piggyback on the contractor that the army engineers will be using, so instead of stopping at Bradenton Beach and packing up and leaving, they can stay right with it and keep on going under a separate and independent contract to do the Coquina Beach segment, and thereby save substantially in local and state dollars,” Hunsicker said.

Mobilization costs for large beach renourishment projects can range from $4 million-$6 million before the first shovel is turned, according to Hunsicker.

In total, the projects would replace more than 700,000 cubic yards of sand lost to erosion and cost around $20 million. Hunsicker expects the work to last three-four months.

The sand will be dredged from a sandbar offshore of the northern end of Anna Maria Island and pumped in pipes to the renourishment area.

Hunsicker said a dump truck can load up to 10 cubic yards of sand at once, and to meet the project requirements would require 70,000 truckloads — an effort that would cost significantly more than dredging and pumping the sand.

A couple of recent storms have furthered the erosion caused by Irma.

Bradenton Beach resident David Herrmann said erosion is apparent north of the groins at Cortez Beach and is within 10 feet of a multiuse path that stretches from Cortez Beach to Coquina Beach.

“I’ve seen this beach come and go for 30 years and this is probably about the worst I have ever seen it,” Herrmann said in an interview Jan. 8.

While he isn’t concerned the erosion will impact his property, he is worried for the multiuse path and utility poles west of Gulf Drive.

“If we have another storm like we just had, it’s going to cut back even more, and the path will collapse. There’s no doubt about that,” he said. “It’s a concern that will become a problem if we get two more storms like those that came through a couple weeks ago. If we get a hurricane, it’s gone.”

Hunsicker said beaches on the Gulf lose 10 feet in depth and width every year due to “an aggressive wave climate that actually has the effect of pulling the sand off the beach, like grabbing a bedspread off of your bed and pulling it onto the floor.”

To counteract the erosion, renourishment projects replace the lost sand so that the Gulf doesn’t eat farther into the beach.

“We put that sand out there, fully expecting it to be sacrificed under very heavy storm conditions,” Hunsicker said. “Rather than farther upland.”

Additionally, groins can help preserve and build upon the existing beach, as they trap sand moving down the beach via the drift current by slowing the sand and changing its direction.

“The new groins (in Bradenton Beach) kept the footprint of the sand in place,” Hunsicker said. “We didn’t lose that much sand there around the groin.”

Bradenton Beach Mayor John Chappie agreed, saying that “in effect, with the recent storms, the groins and the dune system did exactly what they were supposed to do: protect infrastructure.”

Suzi Fox, director of the Anna Maria Island Turtle Watch and Shorebird Monitoring, told The Islander erosion would have no effect on sea turtles or shorebirds while nesting is in its off-season, but would need to revisited when sea turtles begin nesting in May.