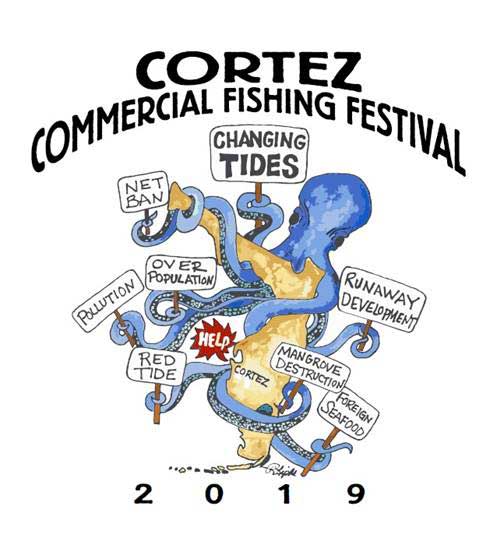 T-shirts at this year’s Cortez Commercial Fishing Festival will feature a design by Rose Lipke, chair of the 37th annual fishing festival in Cortez. The festival will be Saturday and Sunday, Feb. 16-17, between Cortez Road West and the working waterfront on Sarasota Bay. Islander Courtesy Graphic

Commercial fishers battle many odds to bring in a catch.

“Changing Tides” is this year’s theme for the Florida Institute for Saltwater Heritage Commercial Fishing Festival — the annual fundraiser for the now 229-member group, dedicated to preserving commercial fishing and maritime cultures as well as the coastal environment.

Since August, Cortez fishers have been battling losses due to red tide while their support group has been preparing for the fest.

FISH vice president Jane von Hahmann and artist Rose Lipke, festival chair since 2015, said this year’s fest won’t be that different from last year’s, although FISH will increase its advertising on social media, with paid-Facebook boosts and other tools.

Festival planners hope to improve their catch — proceeds from the event.

The fest will kick off at 10 a.m. Feb. 16 with a “blessing of the fleet” and feature 60 art vendors, 20 food vendors and other exhibits, as well as the annual favorite, Dock Talks, a feature organized by FISH member John Stevely, a former University of Florida Sea Grant scientist.

Lipke said some vendors will be brought closer to the streets than last year but she and her committee still must iron out the details.

In the past, a nonprofit group of Cortez fishers, Fishing for Freedom, sponsored touch tanks and cast net demonstrations, but their 2019 contribution is uncertain, according to FFF president Mark Coarsey.

“The boys are having to fish farther away,” Lipke said about red tide’s effect on local fishers and their catch — including losses from the stone crab season.

“Although the bait is coming inshore now, the mullet fishers are working down south, Everglade City, and trucking it back,” she added.

Coarsey planned to meet with his members in the next week to decide on the group’s participation in the festival.

The Feb. 17 lineup includes Soupy Davis and his band, Ted Stevens & the Doo Shots, Jason Haram and the Karen and Jimmy Band, as well as the Eric von Band on the Bratton Store porch.

With the online applications, food vendors have been encouraged to identify their source of products. For artists, 70 percent of their work must reflect commercial fishing, historic preservation, the Florida coastal ecosystem or traditional crafts.

For more information about the fest or vendor applications, go to: www.cortez-fish.org/fishing-festival.