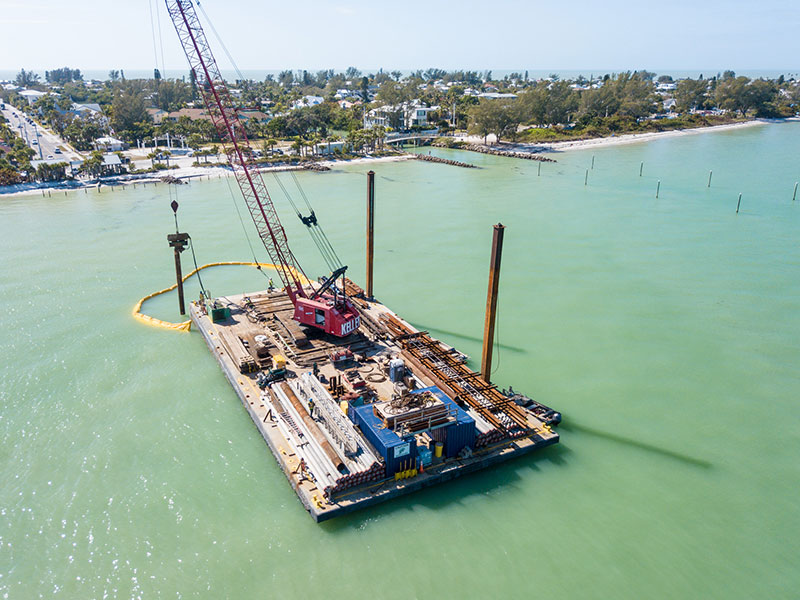 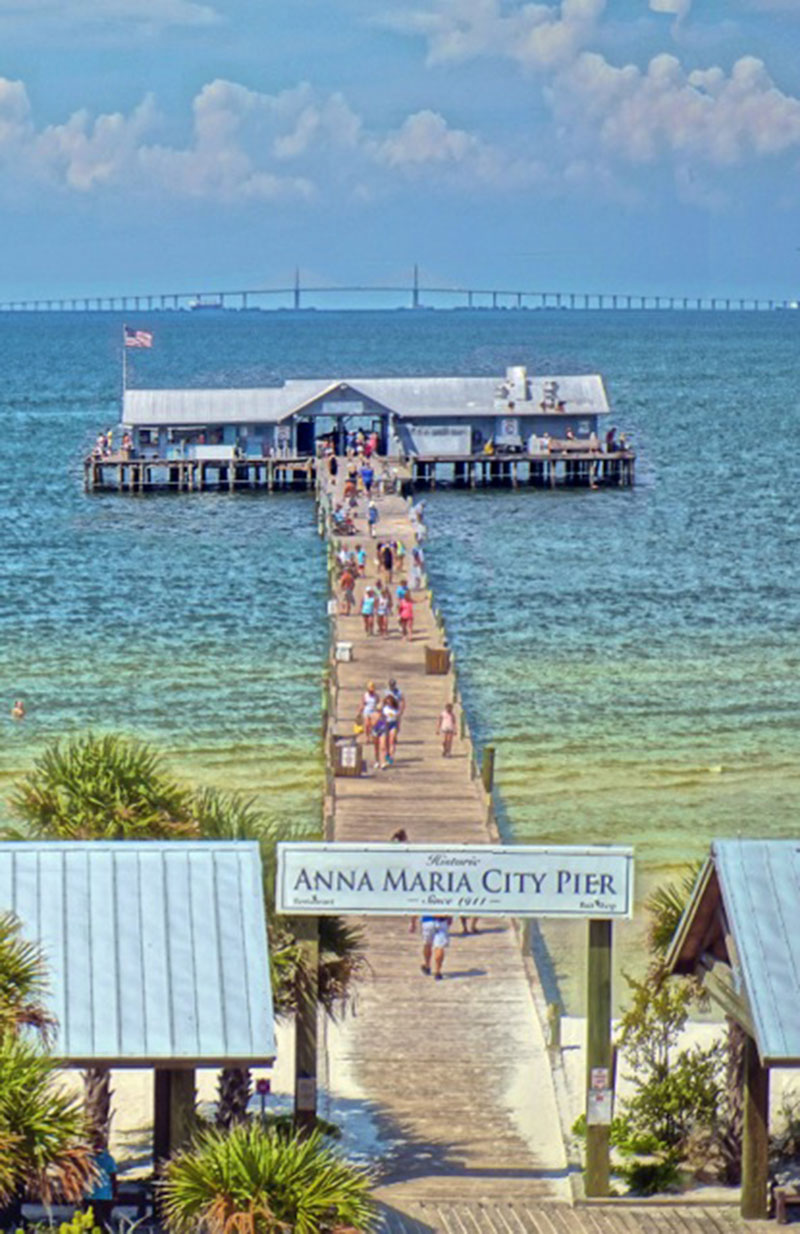 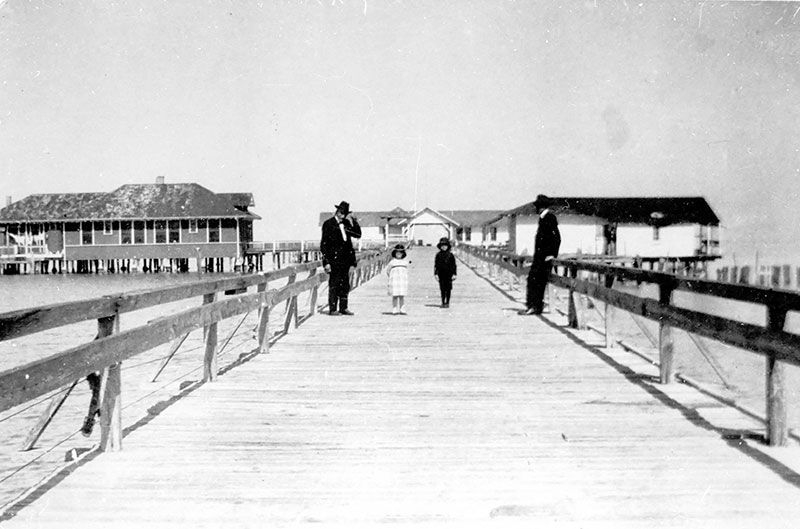 An Islander file photo of the city pier in 2016. A construction barge is positioned Jan. 26 in Tampa Bay to begin work on the new pier. Islander Photo: Robert Abrunzo

Not everyone is happy with the plans for the new Anna Maria City Pier.

The first pilings were to be driven by Jan. 28, according to Vice Mayor Brian Seymour, but former city commissioner and architect Gene Aubry believes there are issues with the pier as designed by the Sarasota-based Schimberg Group.

First, Aubry, who moved to Anna Maria in 1985, is concerned with the lack of railings on the pier walkway. He said railings are important safety measures and could double as a surface for cleaning fish.

“I think the railings are absolutely crucial,” Aubry said in an interview Jan. 25. “You’re 6 feet over the water without railings? I’m questioning the whole blasted thought process because if you’re not putting railings on it, that’s a very serious problem for the handicapped and for the public in general.”

Aubry pointed to the Rod & Reel Pier, 875 N. Shore Drive, Anna Maria, which has no railings but has benches on the walkway for comfort and also to block people from falling into the water.

“I wouldn’t mind seeing more benches,” Anna Maria Commissioner Dale Woodland said in an interview Jan. 25. “Simply because that’s a long walk out there, and we get older people and maybe they want to relax a little bit on their way out there.”

Woodland said the city could discuss adding railings or benches after building the pier.

“We don’t want to mess anything up,” Woodland said. “Look how long it has been already just to get it back to what it was. I’m sorry, but when you’re working with the government and you bring up any new point, that could set you back three months.”

Commissioner Amy Tripp said she wished Aubry’s input had been given during public meetings with the Schimberg Group, held for people to share opinions on the pier design.

“I went to all those meetings, and that was even before I became a commissioner, and I didn’t see him there and I didn’t hear those issues raised,” Tripp said in an interview Jan. 25. “So at this point I just feel like it seems like a really negative thing to say for no productive reason.”

Commission Chair Brian Seymour — vice mayor during Mayor Dan Murphy’s two-week vacation — said a member of the public raised concerns for railings at one of the meetings, but it was discussed and an overwhelming majority of the public feedback was against railings.

“We even had the engineering firm make sure the curbs that run along the sides were higher than originally proposed to help stop things such as a wheelchair from going off the sides of the pier,” Seymour said in an interview Jan. 25.

Tripp, who had visited the island since she was 19 years old before moving to Anna Maria, said she couldn’t recollect any issues when the pier had no railings.

“I don’t think it is really a problem,” she said. “And at this point, it’s a done deal. The design is finished and the money that we have … is already earmarked for how it is going to be used.”

Commissioner Carol Carter said it is the commission’s intention to build the pier as close as possible to the structure damaged by Hurricane Irma in September 2017, but to use longer-lasting materials — such as concrete pilings instead of wood.

Aubry said he also doesn’t agree with using concrete instead of wood for the pilings. He said wood could be used for the pier like it was for the pier demolished in 2018.

Woodland — a self-titled traditionalist — agreed, saying, “Yeah, they have to be replaced once in a while. But is concrete better? I don’t know, I’m not an expert. But I supported the wooden pilings, and I lost that vote 4-1.”

Woodland said he spoke with three different marine construction businesses about wood pilings, all of which told him there wasn’t a big difference between wood and concrete because wood could be wrapped in vinyl to prevent damage from barnacles.

Tripp said the engineer on the project, Ayres Associates, maintained concrete was superior to wood.

“Back in the day when the pier was built, they didn’t have the option of using better materials,” Tripp said. “I know when I redid my house, I put new stuff in it because the old stuff wouldn’t serve me as well. So when you do something, I think it only stands to reason that you’re going to use the best materials on the market that are available.”

Commissioner Doug Copeland declined to comment on Aubry’s issues with the pier design.