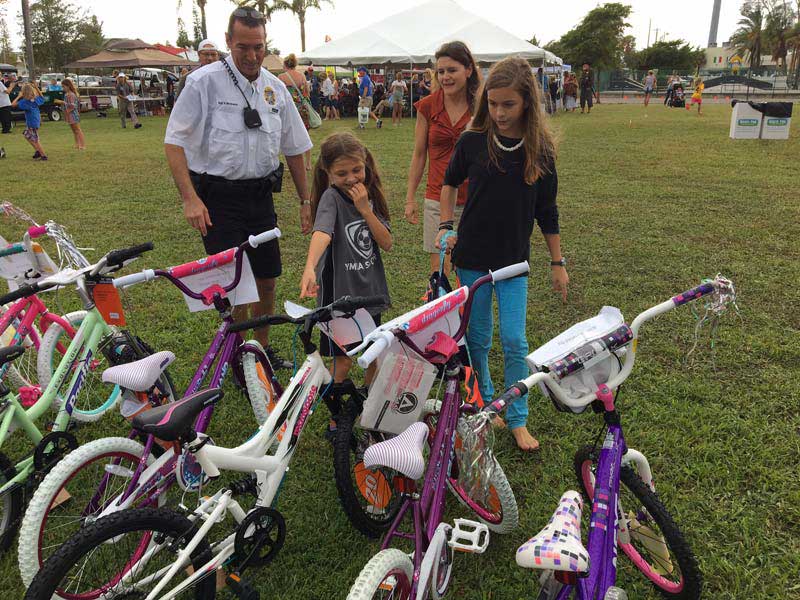 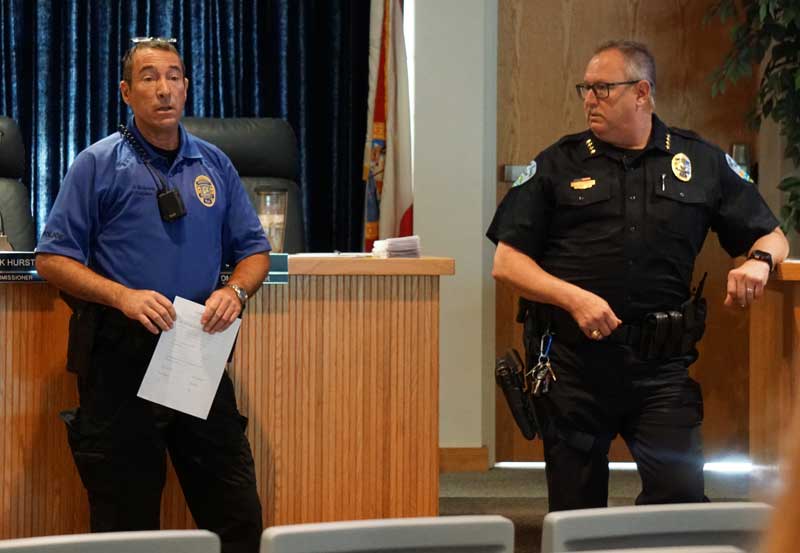 Sgt. Vern McGowin, with Chief Bill Tokajer, speaks at a forum in Holmes Beach City Hall in March 2018, where he introduced the community to the department and its outreach activities. Islander File Photo: Kathy Prucnell

He’s a stand-up guy, with the highest integrity — a family man.

That’s how fellow officers and chiefs regard retired Holmes Beach Police Sgt. Vern McGowin, who is about to live his dream of motoring across the country, visiting his children and grandchildren in North Carolina, Ohio and Oregon.

He’s our choice for Islander of the Year for all the mileage he gave above and beyond the job to Holmes Beach and its residents and visitors.

“He’s just a steady, calm influence,” said Romine, who retired from the HBPD in 2013 and now serves as the director of the Manatee Technical College’s Law Enforcement Academy in Bradenton, which certifies police officers for active duty.

“There’s no one with any higher ethical standards than Vern,” Romine added.

McGowin grew up in Florida, attended the law enforcement academy in St. Petersburg and, after graduating, moved to Alabama, where he served as a police corporal for the city of Laverne. His next step on his career path was Palmetto.

Bradenton Beach Police Sgt. Lenard Diaz worked with McGowin when they served as patrol officers on the Palmetto police force in the late 1980s-’90s.

“You could always count on Vern to show up at your calls,” Diaz added.

Romine hired McGowin from Palmetto and his career flourished at HBPD.

“I had more jobs,” McGowin said of his ride at HBPD. He was a marine unit and patrol officer for years.

As a beat cop, he saw his share of domestic violence, death and accidents.

But in 2013, HBPD Bill Tokajer promoted him to sergeant and, according to McGowin, the best part of his career began.

His “most enjoyable times” included years as the department’s Anna Maria Elementary School resource officer and, later, overseeing the position at the school. He enjoyed the “kinder aspects” of policing and spearheaded HBPD’s National Night Out, Neighborhood Watch and other outreach programs.

McGowin’s heart belongs to his wife, three kids, four grandchildren and Josh Fleischer’s little girl, who, he said, believes McGowin is her grandfather. The feeling is mutual, McGowin said.

Unfortunately, a health struggle precipitated his retirement. McGowin said he was diagnosed with melanoma and the cancer spread to his lymph nodes.

“I am cancer-free now,” he said, adding that he went through several surgeries and chemotherapy.

Today, he’s preparing to hit the road and travel to see his children and grandchildren.

About his police career, McGowin said, “The only regret I have is the time I missed with my family.”

During his time at HBPD, McGowin served as the marine patrol officer, senior officer on the dive team, field-training officer and firearms instructor.

He was chosen Officer of the Year in 2001 and 2004 by HBPD. He attended the Jan. 20, 2017, inauguration of President Donald Trump, as part of the law enforcement patrol on the inauguration parade.

After spending two decades at the HBPD, McGowin said he misses the people, workers and city of Holmes Beach, where he “thoroughly enjoyed working.”

From everyone at The Islander: We thank you for your service, Vern, and wish you a grand adventure and fantastic times spent with family. — Bonner Joy