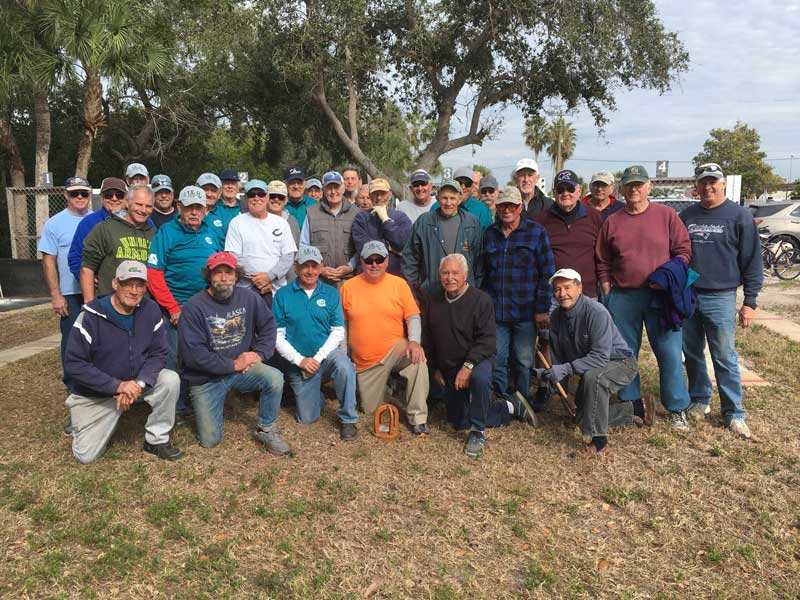 The AMI Horseshoe group ventured across the bridge to mainland Bradenton Jan. 16 to take on the Trailer Estates horseshoe group in a friendly tournament.

The Trailer Estates group came out on top by an 18-14 score in a fun, competitive day.

AMI Horseshoe coordinator Sam Samuels said, “The Trailer Estates horseshoe pitchers were a great bunch of guys and we plan on hosting a tournament at AMI with them soon.”

The team of Hank Huyghe and Tom Farrington were the top AMI team, posting an unbeaten record on the day.

Despite sending eight teams to compete in the Bradenton tournament, regular horseshoe action proceeded Jan. 16 at the Anna Maria City Hall horseshoe pits. Two teams met in the finals with the team of Bob Rowley and Jeff Smith holding on for a 21-16 victory over Norm Good and Bob Heiger.

Three teams advanced to the knockout stage during Jan. 19 horseshoe action. The team of Tom Skoloda and Rod Bussey drew the bye into the finals and watched as Tom Farrington and Bob Palmer defeated Bob Mason and Steve Hooper to move into the finals.

Farrington and Palmer stayed hot and rolled to a 23-10 victory over Skoloda and Bussey to win the day’s proceedings.

The adult soccer league at the Center of Anna Maria Island came to an end after a long delay first due to rain.

The match was originally set for Dec. 20, 2018, but torrential rains, Christmas break and scheduling issues for team members delayed setting a date.

The weather held and the championship game finally was played at the center Jan. 17, with Sato Real Estate outlasting Lancaster Design by a 5-3 score.

Nate Welch and Eric Pullen paced Sato with two goals each, while Francisco Oliviera added a goal and an assist. Scott Bear helped preserve the victory with 11 saves between the pipes.

Lancaster Design was led by Zakary Lieb’s two goals and a goal from Nick Bouchard. Cemal Duzgan added an assist and Trey Horne made 13 saves in the loss.

Flag football action moved into its third week at the center with a bevy of games played, starting with the 8-10 age division Jan. 15.

Slim’s Place opened the night’s action with a 21-6 victory over Ugly Grouper, while Planet Stone rolled to a 38-19 victory over Bins Be Clean. The final game of the night saw Beach Bums roll past Progressive Cabinetry by a 37-6 score.

The victory improved Beach Bums to 3-0 and put them on top of the standings, just ahead of Slim’s Place, which boasts a 2-0-1 record.

Progressive Cabinetry and Planet Stone are tied for third place at 1-1-1, while Ugly Grouper holds down fifth place at 0-2-1, just ahead of last place Bins Be Clean at 0-3.

The 11-13 division played two games Jan. 16, leading off with a 25-12 win for CABB Cleaning over Island Charms. Tyler’s Ice Cream followed with a 27-20 victory over Grooms Automotive.

CABB Cleaning’s victory improved their record to a division best 2-0, just ahead of Tyler’s Ice Cream and Beach House Real Estate with matching 1-1 records. Island Charms holds down fourth place with a 1-2 record, while Grooms Motors & Automotive is still in search of its first victory.

The win improved Ace Hardware to 2-0 and the top spot in the division. Island Fitness and Blue Lagoon both sport 1-1 records and are tied for second, while Cloud Pest Control holds down the cellar with an 0-2 record.

Youth flag football action continues, starting at 6 p.m. on Tuesday and Wednesday evenings at the Center.

Beautiful weather translated to a full week of golf at the Key Royale Club, starting with the men’s nine-hole modified-Stableford system match Jan. 14.

Jim Auch grabbed individual honors after carding a plus-5, a point up on second-place finisher Gary Razze, while Dale Hudson, Chuck Patrick, Bob Soos, Terry Tarras and Ron Vandeman all had scores of plus-3 to finish in a five-way tie for third place.

Vandeman’s score helped teammates Warren Boin and Alan Tripp to the team title with a combined score of plus-9.

The women got out on the course Jan. 15 for a nine-hole individual-low-net match in four flights.

MaryLou Dreier took Flight A with a score of 4-over-par 36, while Carol Patterson’s 4-under-par 28 gave her first place in Flight B and the low-net round of the day.

Flight C went to Beth Lindeman on a 3-under-par 29. Barb Estok was alone in second with a 2-under-par 30, while Fran Barford finished third with a 1-over-par 33.

The men were back on the course Jan. 17 for a nine-hole scramble. The team of Mike Brakefield, Bill Brodie, Mike Gillie and Chuck Patrick combined on a 4-under-par 28 to earn clubhouse bragging rights for the day. The team of Mike Clement, Buddy Foy, Marty Hicks and Lou Pagano took second with a 2-under-par 30, while Jack Lowry, Joe Muscatello, Blake Ress and Tom Solosky were another stroke back in third place.