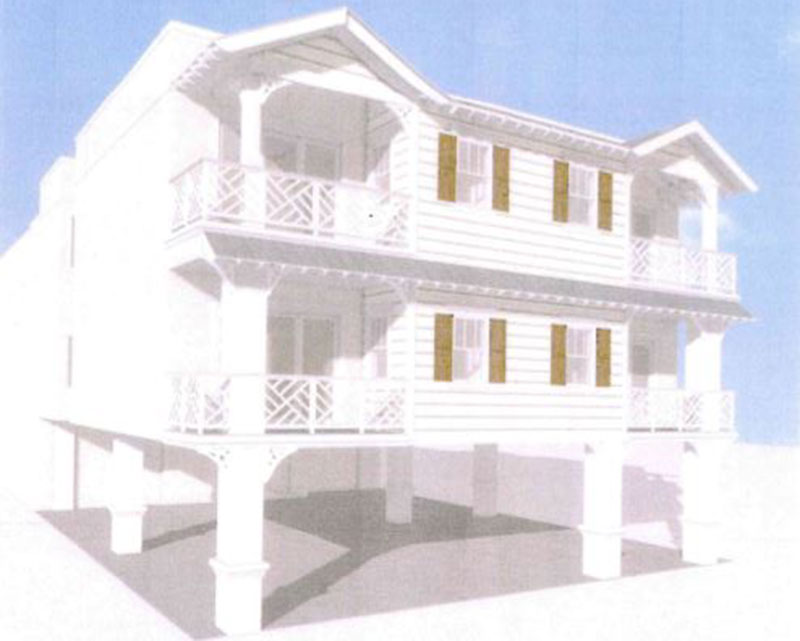 The addition of four vacation rentals to a Bridge Street building is a step closer to reality.

The Hynds Group LLC is managed by Mike and Debbie Hynds of Holmes Beach.

Stipulations from the P&Z require the developer keep the dumpster in its originally approved under-roof location rather than street-side on Third Street South, as proposed in the new drawings, as well as partner with the city to create a buffer between the residential parking area and Third Street South.

The addition of vacation rentals is the second phase of the plans for the property. The first phase was for construction of a restaurant and eight retail spaces, which was completed in September 2018.

Eight existing parking spots for each of the retail units will remain, while one parking space, one space for a golf cart and two slots in a bicycle rack will be allocated for each of the four vacation rental units.

Hynds said he is marketing the vacation rentals with an emphasis on the use of alternate transportation — golf carts and bicycles — which he will provide lodgers.

“All we’re trying to do is discourage the people bringing cars to the island and parking them up for a week and basically not using them,” Mike Hynds said. “So we’re going to partner with some on-island rental companies to provide transportation services for the tenants.”

Bradenton Beach resident William Van Wagner said during public comment that he observed flooding on Third Street South during the first phase of construction. He also complained about an overflow of garbage on the street.

“I’m truly thinking about leaving the city,” Van Wagner said. “I am concerned enough about this building and this builder, based on what I saw during the first construction period.”

Bradenton Beach resident Mary Bell did not oppose the project, but said she wants to make sure her concerns about stormwater runoff and use of Third Street South for construction parking and staging — both problems she experienced during the first phase of construction — are addressed.

In response, board members stipulated that Hynds provide the city with a construction staging plan.

Hynds told board members he never received a complaint during the first phase of construction, but said he would work to ensure such concerns will not arise again.

“Going forward, we will definitely take onboard what was discussed at the meeting, and we will certainly be working to alleviate any concerns in the future,” Hynds said in an interview Jan. 17. “We are responsible property owners and we take pride in our properties. Problems with neighbors is not something we want.”

The plans for the proposed vacation rental units will go before city commissioners for consideration in March, according to Hynds.