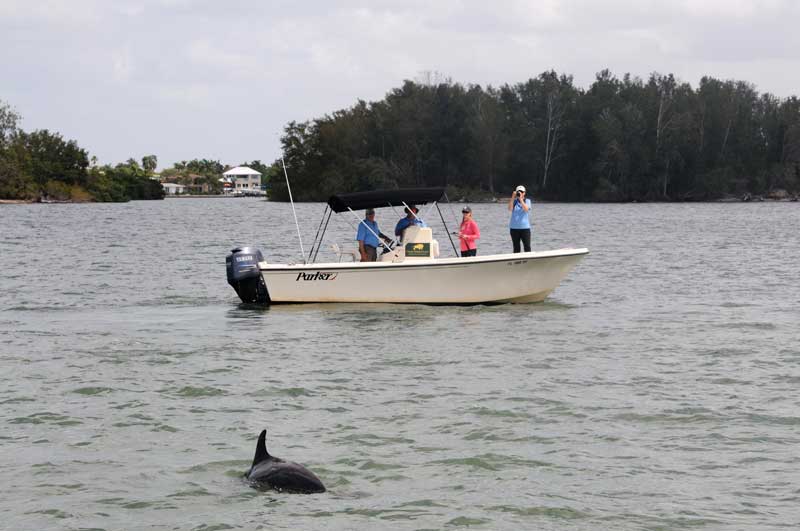 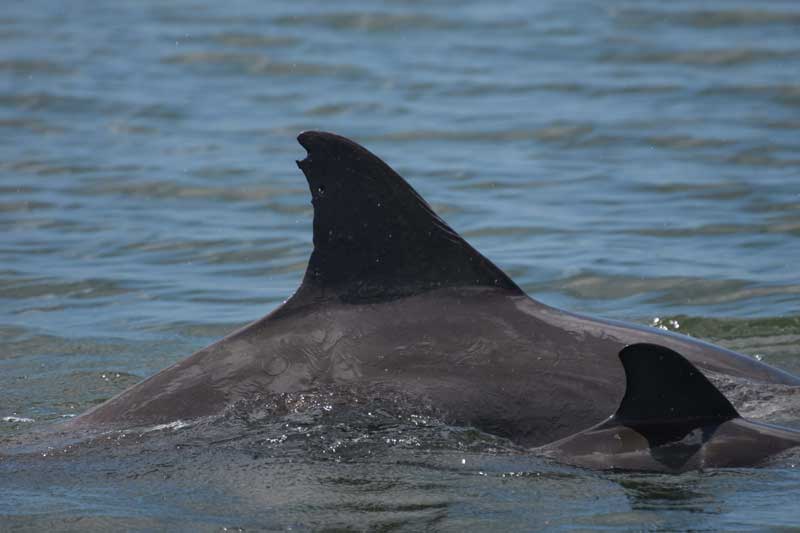 Fins are used for identification on dolphins, as with this photo of Saida Beth, a 36-year-old female who gave birth to her 11th calf in the summer of 2018. Islander Photos: Courtesy SDRP under NMFS Scientific Research Permit No. 20455.

When three juvenile bottlenose dolphins died near the Kingfish Boat Ramp in November 2018, they were identified as fifth-generation Sarasota Bay dolphins.

But what does that mean?

The Sarasota Dolphin Research Project was the point of reference. SDRP is conducting the longest continuous study of marine mammals in the world.

Generations of dolphins in the waters surrounding Anna Maria Island have been identified and followed by research scientists who call Sarasota Bay their living laboratory.

Blair Irvine, who serves on the board of directors for Dolphin Biology Research Institute in Sarasota, and a then-high school student named Randy Wells, started the project in 1970.

The driving question of that time?

Do dolphins live here all the time or do they pass through?

Wells is the director of the Chicago Zoological Society’s SDRP and works from an office at Mote Marine Laboratory.

The project research encompasses husbandry, threats to dolphins from environmental issues such as the recent red tide, common illnesses, what and where dolphins eat and how far they move about in their home range.

The CZS took over the SDRP in 1989. The CZS, based at Brookfield Zoo in Brookfield, Illinois, was the first inland oceanarium to contain live dolphins in the United States, adding them in 1961.

“We had no idea where the dolphins lived when we started. We knew nothing about the local resident community,” Wells said.

Now, the project is studying a fifth generation of Sarasota Bay dolphins.

With long-term surveys developed along the way, scientists have learned about dolphin social behavior, habitat needs and the impact of humans on dolphin’s lives and health.

Veterinary knowledge from the project has been used worldwide to develop protocols on treating sick and injured dolphins.

The outlook for Sarasota Bay dolphins

Wells said long-term, the outlook for the bay dolphins is guarded.

“It’s all because of the red tide,” he said. “We lost residents in the program from 45 years old to the juveniles at Anna Maria that were about a year and a half old. But it’s the long-range effects we are concerned about.”

This resulted in increased dolphin mortalities in 2006, including a 2 percent jump in fishing-related deaths caused by dolphin interactions with anglers.

“Don’t feed dolphins, ever,” he advised. “If dolphins do approach you while you have fishing lines out, reel them in and move locations. Do not release fish when dolphins are close by.”

“We may not know the outcome for a year or more on the Sarasota Bay dolphins mortality,” he said.