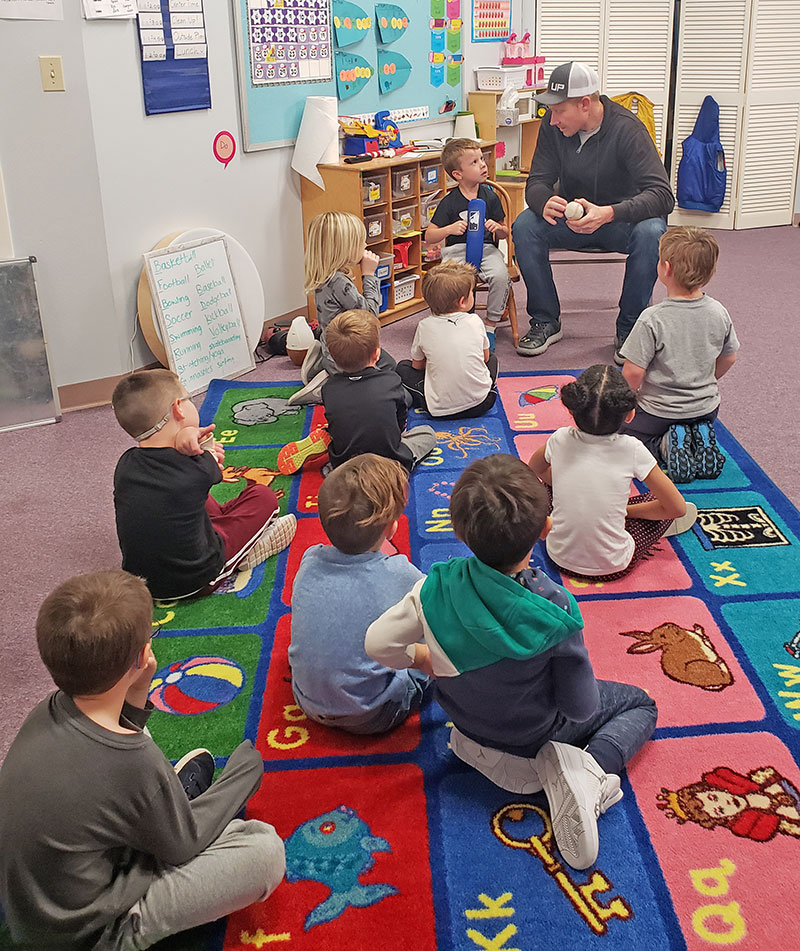 San Francisco Giants pitcher Mark Melancon visits with students at the School for Constructive Play to celebrate Sports Week. He entertained questions from the kids in a classroom at the school at Gloria Dei Lutheran Church, 6608 Marina Drive, Holmes Beach. The Giants train in Scottsdale, Arizona, and are part of the Cactus spring training league. Islander Courtesy Photo

There was plenty of action on the gridiron on AMI for adult and youth players the week leading up to Super Bowl.

Beach Bums, which boasts a 6-0 record, leads the 8-10 division, just ahead of second place Progressive Cabinetry with a 4-1-1 record. Slim’s Place holds down third at 3-2-1, while Planet Stone at 1-4-1 is in a tie with Ugly Grouper for fourth. Bins Be Clean at 1-5 completes the standings.

Action in the 8-10 division kicked off Jan. 29 with Progressive Cabinetry rolling to a 20-8 victory over Planet Stone behind touchdowns from Landon Snyder, Conner Henderson and Jack Whiteside. Gavin Lyssy and Snyder completed the scoring with extra points.

Cale Rudacille scored the lone touchdown for Planet Stone in the loss.

The second game of the evening saw Beach Bums outscore Slim’s Place 32-21 behind a pair of touchdowns from Ashton Hovda and a touchdown and extra point from Peyton Hovda. Brennen Gunter, Ava Harlan and Nixon Conner each added a touchdown in the victory.

Joseph Bramurov had a touchdown and a pair of extra points to lead Slim’s Place in the loss, along with touchdowns from Ben Rigney and Alexander Teich and an extra point from Laynie Sabath.

The last game of the night saw Bins Be Clean edge Ugly Grouper 20-19. Connor Samblis and Gabriel Conn led Bins Be Clean with a touchdown and an extra point, while Carter Nance added a touchdown in the victory.

Carson Clover’s two touchdowns led Ugly Grouper, which also received a touchdown from Beckham Factor and an extra point from Carter Cantrell in the loss.

Eight-to-10 division action Feb. 2 saw Beach Bums continue to roll high with a 33-6 victory over Slim’s Place. The second game saw Ugly Grouper come off the schneid with a 39-0 victory over Bins Be Clean, while the final game Feb. 2 saw Progressive Cabinetry edge Planet Stone by a 15-7 score.

The 11-13 division is led by CABB Cleaning, which sports a 4-0 record, comfortably ahead of second place teams Beach House Real Estate and Island Charms, both with 2-2 marks. Tyler’s Ice Cream follows at 2-3, while Grooms Automotive is in last place on a 1-4 record.

The 14-17 division has ACE Hardware on top with a 4-0 record, while Island Fitness is right at 3-1. Blue Lagoon holds down third place at 2-3 and Cloud Pest Control follows at 0-5.

The 14-17 division was back in action Feb. 2 with ACE Hardware rolling to a 29-14 victory over Blue Lagoon, followed by Island Fitness outscoring Cloud Pest Control 35-26.

The adult flag football league at the Center of Anna Maria Island completed its third week of action with Gulfview Windows, Lancaster Design, Beach House Real Estate and Progressive Cabinetry all with 2-1 records, while Hashmark Sports at 1-2 and Ugly Grouper at 0-3 complete the standings.

Progressive ended Gulfview Window’s hopes for a perfect season with a 34-13 thrashing to open adult action Jan. 31, while Lancaster Design improved to 2-1 with a 26-13 victory over Hashmark Sports in the second game. Beach House Real Estate closed out the action with a 34-13 thumping of Ugly Grouper.

Three teams advanced to the knockout stage and battled for the day’s supremacy during Jan. 30 horseshoe action at the Anna Maria City Hall horseshoe pits.

The team of Al Booker and John Crawford drew the lucky bye into the finals and watched as Gene Bobeldyk and Larry Delarber easily advance with a 21-1 route over Bob Mason and Tim Sofran. But Bobeldyk and Delarber couldn’t maintain the momentum, as Booker and Crawford rolled to the champion circle with a 22-15 victory.

The Feb. 2 games appeared to be heading to a four-way playoff, but three teams with 2-0 pool-play records dropped their last matches, leaving the team of Crawford and Bob Palmer as the day’s outright champions.

Persistent rains closed the course and limited members of the Key Royale Club to the clubhouse Jan. 28-29.

The course dried sufficiently Jan. 31 for the men to play a nine-hole shamble, producing the shot of the day for Bill Brodie — a hole-in-one!

The 50 shamble golfers enjoyed refreshments with thanks to Brodie.

The team of Neil Hammer, Chuck Patrick, Larry Pippel and Gary Risner matched the 1-under-par 31 carded by Kevin Brown, Brian Comer and Jerry Martinek to finish in a tie for first place. Second place went to the team of Ken Butler, Al Carr, Tim Friessen and Marty Hicks with a score of even-par 32.