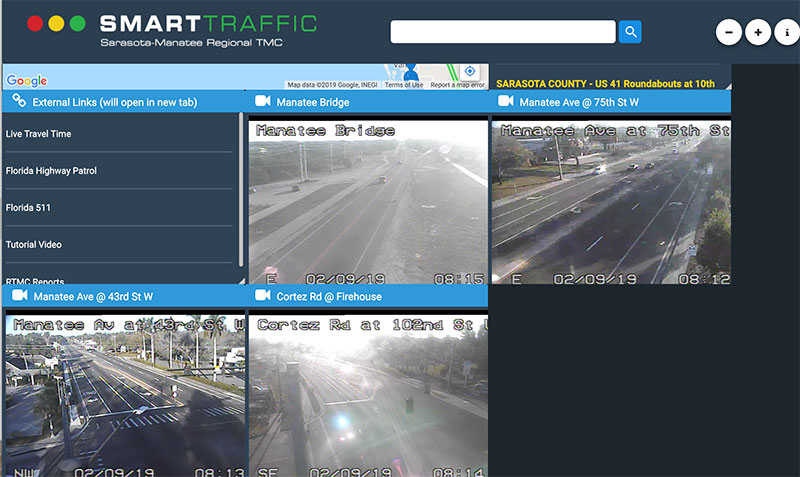 A screenshot of the “smart traffic” site on the web shows real-time traffic situations in Sarasota and Manatee counties. Users click a camera — or multiple cameras — to see current traffic conditions, including at the Anna Maria Island Bridge and on Cortez Road and Manatee Avenue approaching the island. The site is at www.smarttrafficinfo.org.

The drivers navigating the Barrier Islands Traffic Study may not pass the final pylon on their course before the next traffic season.

The original timetable for completion of the Barrier Islands Traffic Study was this spring, but changes to phase 3 mean a public presentation on the multiyear study won’t take place for another year.

“The schedule is changing a little bit,” said Bessie Reina, planning manager for the Florida Department of Transportation District One based in Bartow.

Reina said the DOT is changing phase 3’s scope based on recommendations and requests from the study’s steering committee, which wanted more data, including travelers’ origins and destinations, and more public input.

The re-scoping pushes back the public meeting on the study, which the DOT wants to take place during the winter-spring tourist season rather than off-season.

“It was looking like middle of summer,” Holmes Beach Mayor Judy Titsworth said. “And they’d rather not make their presentation when people are not around.”

Still, said Reina, “We will move fast in phase 3.”

Titsworth also said the change to the schedule should not interfere with “moving forward on things we need, like roundabouts.”

The comprehensive study — requested by the Sarasota/Manatee Metropolitan Planning Organization at the urging of local officials — launched in November 2017 and involves examining regional transportation, identifying issues and recommending potential solutions.

During phase 1, planners collected studies — at least 15 — of transportation and parking on the barrier islands in Manatee and Sarasota counties.

Phase 2 resulted in a 1,220-page “operations and identifications” report containing assessments of existing conditions and recommendations to improve access to, from and circulation on the barrier islands — including in Anna Maria, Bradenton Beach and Holmes Beach.

A spreadsheet published last October during phase 2 shows long-term, midterm and short-term projects, including some completed, some under construction and others to be funded or considered.

“There’s always going to be congestion,” Holmes Beach resident Carla Nicks said Feb. 7, as she waited for a green light on westbound Manatee Avenue. “But I hope they come up with some creative ways to at least reduce traffic.”

Phase 3 will involve crystalizing a community vision and deciding how to make recommendations realities.

“I’m really excited about how we’re thinking about this project,” Reina said. “We have to be creative. Everything is on the table, which is really cool.”