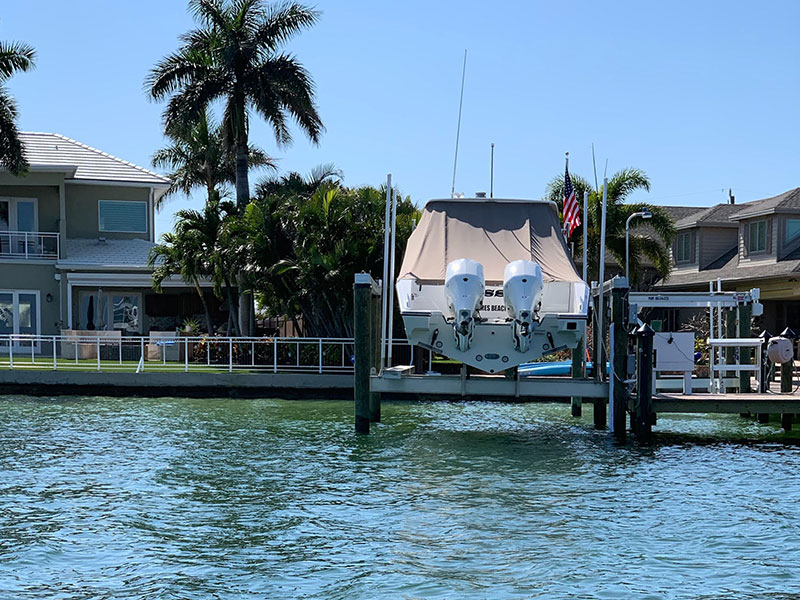 The owners of 606 Crestwood Lane on Key Royale in Holmes Beach claim a newly constructed dock and boatlifts at 604 Crestwood Lane infringe upon their riparian rights. Laurie and Robert Mock own the home on the left, including the white fence. Islander Photo: Courtesy Laurie Mock

A Holmes Beach resident is taking issue with the city over her neighbor’s dock.

But it appears the dispute will be decided in court or by the state, not the city.

In a Feb. 20 email to Mayor Judy Titsworth, Laurie Mock of Crestwood Lane said a dock built by her neighbor was improperly permitted and the boat and Jet Ski lifts encroach on her riparian rights.

Riparian rights are the interests of landowners that may attach to real property that connects to an adjacent body of water.

Mock wrote that a marine consultant looked at the property and said the dock, permitted by the city in November 2018, should not have been approved for construction.

She cited a section of the city code of ordinances that states, “No dock, wharf, pier, mooring piles, groins or other structures extending into or over waterways shall be erected or installed except upon issuance of a permit from the department of public works.”

Plans and permits from other agencies also must be obtained.

Additionally, she included a portion of the city land development code that states a dock and an access walkway must have a 25-foot setback from adjoining property lines — a requirement that Mock claims was ignored. She questioned in the email the qualifications of city staff to sign off on permits.

Holmes Beach Mayor Judy Titsworth responded Feb. 21 that she understands Mock has concerns with setbacks and work performed without a permit.

The mayor told Mock she would discuss the dock with the city planner.

Titsworth said she later spoke with Mock and suggested she speak with the dock owner prior to receipt of a March 18 email from Mock in which she asked Titsworth to provide a “determination in writing.”

Manatee County property records show the owners of 604 Crestwood Lane are Mary and Carmine Stella. The Islander was unable to reach them for comment.

Titsworth responded that day that she was not sure what Mock required since the final inspection occurred and the project is completed.

“Please, let us know once you hear from your riparian survey provider,” Titsworth wrote.

The mayor also inquired about whether Mock was able to talk to the neighbor about moving the lifts to the other side of their dock.

Titsworth asked to alert her of any determination by the Florida Department of Environmental Protection after its inspection and, she replied, yes, the building official — who resigned March 18 — was qualified to sign permits.

Mock wrote March 19 that Titsworth’s response was “very very concerning.” She questioned city planner Bill Brisson’s experience dealing with riparian rights and said she wants a determination in writing “of the improper approval of the dock and lift at 604 Crestwood Lane.”

Mock questioned the ability of city leaders to govern.

In a March 21 interview with The Islander, Titsworth said she told Mock the city’s jurisdiction stops at the seawall and riparian line dispute is with her neighbor.

“My thought is, why are we issuing the permit for Florida outstanding waterways?” Titsworth asked.

The mayor questioned whether the DEP exempted a permit in state waters.          She also noted that riparian lines can vary depending on the surveyor.

The underwater land could be state land or it could be deeded to the property owners.

Mock submitted a survey of the setbacks by Leo Mills and Associates to the city.

“They pay for their surveys and go to court and the judge makes the determination,” Titsworth said.

Titsworth said, in the meantime, she awaits the DEP dock inspection report.